A tribe of cats called the Jellicles must decide yearly which one will ascend to the Heaviside Layer and come back to a new Jellicle life.

Have you ever watched a character on screen and they’re so damn annoying you crave a different character to come along and give them a smack in the face? Hayward (the lead) is one of these. Jesus, the woman is insufferable. With a never-ending pout and a naive glare you’d be forgiven for thinking she just walked off set at Disneyland or something. And this is just the beginning. She spends the rest of the movie either wriggling around and giggling like a nauseating, attention-seeking child, or curling around and stretching up against lamp posts like she’s taking part in a fancy dress yoga class. 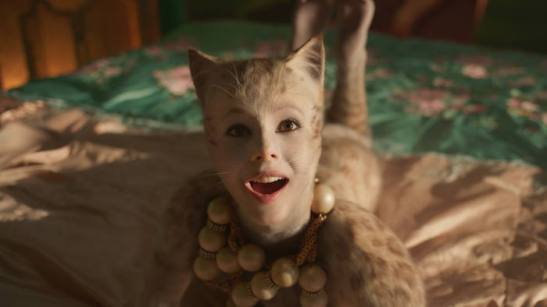 All this is played out whilst Victoria empathises with Hudson’s character which in itself becomes increasingly tedious as Grizabella approaches the other cats.. then pisses off.. and returns.. before pissing off again.

Never let Dame Judi Dench sing in a movie. Ever.
Christ, she is just as husky when croaking a Cats ballad. In fact, she’s husky to the point of speaking the lyrics rather than belting them out like the famous Broadway show cast members do. I sat wondering if she’d actually trained in singing or not – she seemed to be delivering lines but tearing them apart (ironic really, being as she had a set of claws).

Elba is in his bloody element throughout. Top hat and gold makeup, he twirls around like he owns the show.
He doesn’t.

Cats surprised me slightly – and not in a good way either. Although a musical, there was barely any normal dialogue between characters. It was roughly 95% singing. The other 5% was Corden and Wilson pissing about on a boat, creating a bizarre atmosphere to fill the gap between serious, emotional scenes. I was slightly surprised at how one song blended into another – then another – like an unbearable chain of continuous high notes.

This movie is a horrible introduction to Cats if you are unfamiliar with the stage musical. Slightly depressing, very irritating, extremely dull. This proves that a colourful cast doesn’t always mean a successful production.
Just awful.

This entry was posted on March 1, 2020 by rickysfilmreviews.