European mercenaries searching for black powder become embroiled in the defense of the Great Wall of China against a horde of monstrous creatures.

Word of advice: keep away from this one. Seriously. It’s not worth the amount of bodily energy it takes to lift your hand and place it on your mouse, to then hit ‘download illegally’ – or however else you watch movies these days (I know how most of you get entertainment for free, you cheeky things).
My point here is, The Great Wall is just shocking from beginning to end. Which is a shame because the concept is all there:
The Great Wall – a genuine world famous landmark – was built to keep something out. Brilliant. It’s like saying the Eiffel Tower was erected to shoot “keep out” lasers into outer space, warding off aliens or other unwanted visitors.

Didn’t work though, this Great Wall idea. In fact it flopped spectacularly, as one dull scene bled into the next with uninteresting characters replacing action with idle talk. This movie’s ancient theme didn’t help either, giving the effect of something you’d find your grandfather watching on a Sunday evening. I started to get bored within the first twenty or so minutes; Damon dressed in his warrior outfit and sat being talked at by the lead female as she gave blank, staring facial expressions. I was craving the monsters – whatever they were – to make an appearance and kick the movie off. And suddenly, the scene changed..

The next scene was a handful of women showing how agile they were when attached to the end of bungee cords. The female soldiers threw themselves over the side of the Wall in order to kill the monsters, before bouncing back up again. One got eaten, poor thing. But in all honesty – I just couldn’t give a shit. They seemed to liven up the screen with their acrobatics though. And they’d probably make the ideal BBC ident with outfits like that. 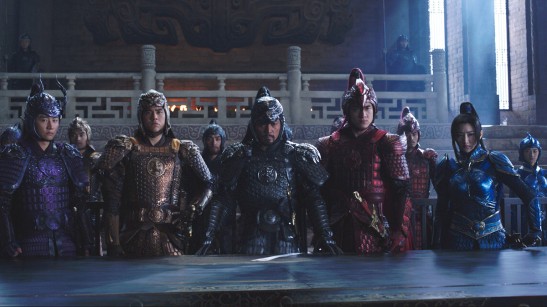 A movie like The Great Wall could be brilliant; has the potential to wow viewers with a constant rush of excitement. I can imagine the plot itself being based on a real landmark making a huge impact – it would give a great twist on what people know about the Wall. I would have loved to embrace the collision of fiction and non-fiction. Snappy scenes laced with the occasional laugh. Entertaining actors who portray engaging characters. Historic value. Intrigue. And of course, the monsters themselves the warriors are trying to keep out.
Perfect.
Unfortunately, The Great Wall was the polar opposite of any of these elements and reversed is own potential by spitting out one dark scene after another (dark in emotion as well as colour – pale shabby clothing, unlit castles, etc.) which contained a very low level of energy. Until of course, they came…

The moment the Taoties made their first appearance I was intrigued as to what they would look / sound like, how menacing they would be for Damon’s character.
And they weren’t bad at all; very good use of CGI to portray the hungry bastards. The visuals used during scenes where the creatures approach the Wall were good too, using cavernous misty mountains as a backdrop of dread as figures in the distance are seen charging towards the humans..

Given the rest of the movie seemed as dull as a delayed train journey (a-hem, Britain), it were these bizarre beasts who caught the movie in their claws and saved it from smashing into the mountainside. Parts of this movie reminded me of Robin Hood: Prince of Thieves (1991); those darkly-lit scenes inside the castle with characters standing around talking. Few bales of hay. Flickering candle. Dull.
So yes, thank god for the monsters – they should definitely have been kept in certain scenes for longer to lead the way.

The Great Wall is a great load of shite. It’s dull and it’s murky with its only saving grace being the Taotie – thank god for monsters, because without them this would have been unbearable. Absolutely worth a watch if you’re sat in an unfurnished room with no form of entertainment or any other human being in sight. Otherwise, I’m sure you have higher standards and would recommend putting a great wall between yourself and this movie.