A Cure for Wellness

An ambitious young executive is sent to retrieve his company’s CEO from an idyllic but mysterious “wellness center” at a remote location in the Swiss Alps, but soon suspects that the spa’s treatments are not what they seem.

A Cure for Wellness is one hell of a twisted movie. But it remains entertaining a the same time, delivering a bizarre mix of characters who get involved in some truly shocking situations. And even those who don’t, seem to come across a bit bizarre anyway.
This movie contains the perfect blend of cast both young and old, who fuel the production nicely with this dynamic. This also means comedy; seeing De Haan up against lead wrinklies is different and ensures funny moments especially when one of the old chaps drops a bizarre one-liner. Roles are reversed as the young character looks on in disbelief at his elders, especially when their level of sanity is revealed. Cue many wide-eyed facial expressions from our lead actor. It’s bizarrely funny stuff.
But with oldies comes yucky, when events take an incredibly sinister turn..

If you’re not a fan of slippery, wriggly creatures then you might just be wriggling in your seat. During this strange movie people are bathing in them, being attacked by them, and even force-fed them. It’s fucking disgusting, especially one of the final scenes between Lockhart and Volmer. I sat through The Human Centipede without having to change my pants, but even I felt queasy during this final confrontation. Be warned – it’s not pleasant.
The good thing about this slimey concept though is that it makes intriguing viewing – because lord of the retreat Dr. Volmer has a nasty plan up his sleeve and this is where the story splits, bringing an uneasy atmosphere with the addition of slimy creatures as a backdrop. 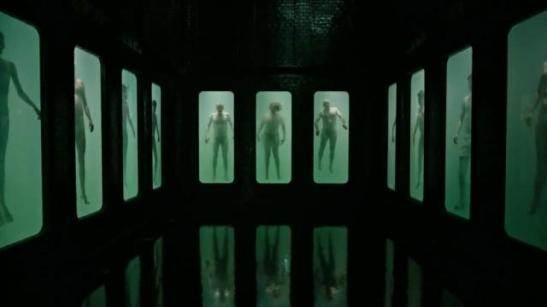 In a sense, this movie is macabre. It’s unique. And these have to be its most striking qualities, making it more interesting of a watch than some other ‘huge institution on a hill’ type flicks I’ve seen before.
A Cure for Wellness is a mystery that those interested in such a genre should find interesting. Missing people, moving walls, robotic people, strange operations taking place.. this is a treat for fans of psychological puzzles and the like.

Great to see Celia Imrie part of the cast, however random her casting appeared. De Haan starring in a movie with someone like Imrie is quite strange; they seem so far from the ideal co-stars you’d find in other movies (like Joanna Lumley and Joseph Gordon-Levitt – just bizarre). But somehow it works, and Imrie gives a brilliantly effective performance as Victoria. She puts that ‘stare’ she has to good use; craning her neck and looking at people inquisitively, then slowly looking away.. great stuff and she fits in well.

A Cure for Wellness makes the perfect watch if you fancy something sinister. It will definitely weird you out if that’s what you’re wanting, and is led nicely by De Haan. His naturally boyish looks and unique (some might say ugly – not me obviously) facial features make him a highly effective protagonist, however miserable his face is for 80% of the movie.
I really wasn’t expecting the ending to happen the way it did, so this – coupled with an intriguing opening and a nice twist in the plot – means A Cure for Wellness just about saves itself from being a load of crap.