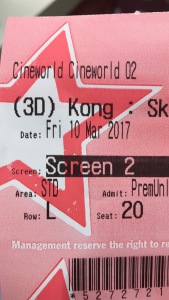 A team of scientists explore an uncharted island in the Pacific, venturing into the domain of the mighty Kong, and must fight to escape a primal Eden.

So here we are with Kong: Skull Island. The, what is it, fifth or sixth movie centred around the gargantuan furry chap with a penchant for damaging buildings and developing an animal-human crush (weird) on moderately attractive women who cross his path.
And it’s not bad. Not spectacular, but not bad.

The thing that makes this movie is its interesting variety of otherworldly creatures and monsters. You can certainly tell director Jordan Vogt-Roberts put a lot of effort into the visuals involving them – they’re fucking epic. Even the wriggly octopus thing which makes an appearance – epic. There are spiders hundreds of feet tall with legs like trees, big rocks which suddenly spring to life and form bizarre creatures, even dangerous winged predators who look like pterodactyls on steroids. Il t’s a mixed bag bursting with wacky buggers, and it works as a nice distraction from the otherwise bland action taking place between the various human characters.

On the ground you have Hiddleston (James), Goodman (William), Larson (Mason), Jackson (Preston), and Reilly (Hank) as the pivotal characters keeping the movie going. Hiddleston is quite different in this feature to others I’ve seen him star in; the actor actually tones down the dramatics and comes across slightly less engaging than a few of the others. He’s still a lead role, but he’s a bit more subtle as his Air Service Captain character.

Larson adds a great dynamic – but then I suppose this is obvious as she’s the only main female character. From the word go, she adds a dash of dry humour to the movie; I read in a recent newspaper review that her character is feisty – but I’m not so sure about this. Mason is one of those strong, smart females every feminist would adore, but she doesn’t bring the house down with a feisty attitude. Larson is great though, and delivers an engaging performance with many wide-eyed facial expressions. She’s good at this. 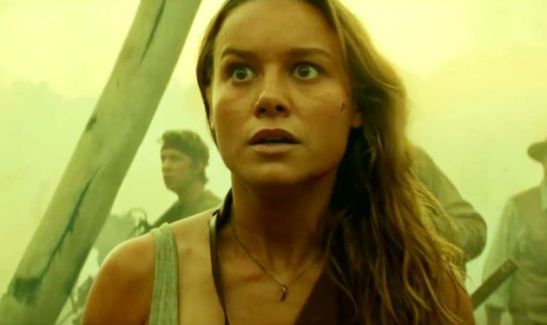 The backing cast are a bit bland, melting into the background as though the director just announced they’re not getting paid. They don’t seem overly involved, appearing once or twice in major scenes for back-up, before vanishing again. But then I suppose the main focus was on the harsh action taking place between Kong and his visitors. Which brings me on to my next point..

I have to say although Kong: Skull Island wasn’t one of my favourites, the scene where the expedition enter Skull Island is great. The tension builds nicely here by throwing the obstacle of a deadly storm in to the mix. This heightens the scene dynamics dramatically as the characters are plunged into a terrifying situation. Never has a spell of mist been so scary. The graphics used are great too as the helicopters glide towards their destination, churning lightning flashes with clouds of dark orange and brown, and creating a highly electric atmosphere. I liked this. It worked. And it kept my attention – I didn’t want to take my eyes off the screen, especially with Larson screaming and bouncing around like a rag doll; this was the most physical performance I’ve seen from her in a movie so far!

Kong’s first appearance is great. This scene contains the perfect amount of build-up, with the choppers flying in and the crew trying to decipher exactly what the massive moving object is lurking in front of them. His looming presence stirs a sense of dread which also heightens the anticipation of human-beast introduction. And then Kong takes a swipe at the choppers, nastily knocking them out of the sky. This bit is brilliantly action-packed, his massive fists smashing up anything human he sees. It’s the perfect blend of aggression and excitement.

This scene reminded me slightly of Honey, I Blew Up the Kid (1992). Random as it sounds, it reminds me of when Diane Szalinski (mother) stomps through Vegas and grabs a military helicopter out of the sky, with her enormous human eyes looking through the window.
Except Kong didn’t yell, “BACK….OFF” in a voice so slowed down I wondered if being enlarged had actually destroyed her vocal chords.

I thought I’d dislike this movie but it was actually not bad at all. There is action aplenty and some very colourful visuals making it largely entertaining. Sadly though, I fear Kong: Skull Island will be one of those productions to disappear quickly as bigger and better action movies take over. Worth a watch if you have an evening free and fancy a big dollop of escapism for 116 minutes.
Give it a pop.