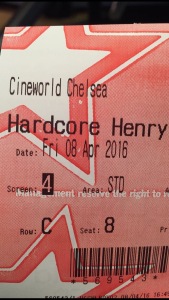 A first-person action film from the POV of Henry, who’s resurrected from death with no memory. He must save his wife from a telekinetic warlord with a plan to bio-engineer soldiers.

Hardcore Henry is by far, one of the most incredible movies I have ever seen. And I mean this in a both positive and negative way. I have honestly never seen anything like it of its kind.
You know those computer games where you’re looking through the eyes of the lead character as he or she shoots their way through apartment blocks and city streets? You hit the button on your control pad to fire, and a gun rises on the screen in front of you, pointing in various directions? Sharp walls and corners give way to narrow hallways as you – the character – runs down them?..

A movie that doesn’t just deliver an action-packed plot, but breathes fire (literally) into the ‘shoot-em-up’ genre and turns it completely on its head.
How?
By making the viewer the main character. As the movie plays out, the screen is nothing but the first-hand view of Henry himself as he runs, jumps, shoots his way around various locations. Hell fire, there’s hanging upside down from the bottom of a helicopter, scaling the wall – and then hanging from the ledges – of a vastly tall building, jumping dangerously from apartment blocks, car chases, exploding laboratories.. 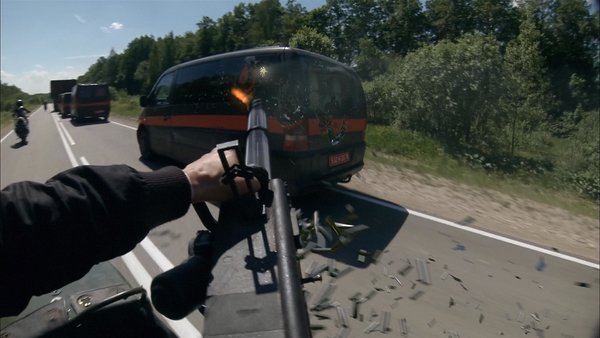 This movie goes beyond ‘drawing the viewer in’ – the viewer is already in it. I found the entire thing a nauseating but fascinating watch. When I exited the auditorium, I walked into the cinema foyer and immediately voiced my dumbfounded shock to the girl behind the ticket counter and the guy who was stood talking to her. He had just watched the same movie and commented how mad it was. He also mentioned something I spotted in the auditorium – the viewer who left.
Literally about six or seven minutes in, a man in front of me got up and walked out. The story hadn’t even begun, but this man clearly knew how the entire movie would run. And he must’ve felt worse; he was sat two rows in front of me and I chose where I sat because it was right in the front (maybe I could get the whole ‘simulator’ feel from this movie). And I didn’t blame him, I probably would have shit everywhere from extreme nausea had I sat where he did.
So he left, the random guy in the foyer looked drained and miffed, and there I was – stumbling out of the auditorium feeling like I wanted to vomit the whole experience out of me.
Horrible. 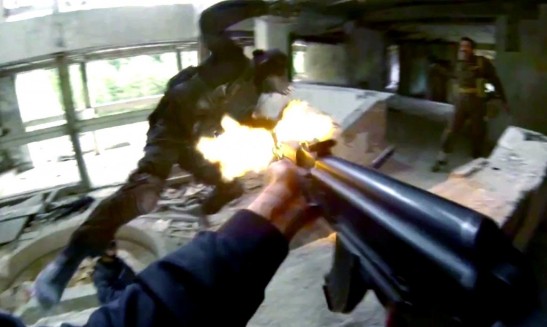 On the plus side though, Hardcore Henry was one of the most incredible movies I have ever seen.
Confused?

Eyes wide.
Brows up in surprise.
Brows down in a heavy frown.
Wincing in digust.
Laughing in empathy.
Mouthing the words “what..the..fuck…” silently and slowly.
And sometimes all these reactions at once.

This was me during Hardcore Henry. Far from boring, this movie kept me constantly entertained with its (often vile) fast-paced action. I say vile with a tone of warning – because if graphic scenes aren’t your sort of thing, avoid this movie at all costs. Just the sinister opening titles show a jagged blade being thrust into a man’s throat, a bullet exiting a gun in slo-mo and penetrating one of the body’s main organs, etc. I sat with my mouth hanging open, not wanting to watch – but intrigued at the same time. This opening sequence reminded me instantly of recent flick Deadpool (Ryan Reynolds); a deep, heartfelt love song plays loudly as horrible ‘cuttings’ are happening to someone. The contrasting music & action playing out on screen is wonderfully strange, and probably one of Hollywood’s greatest elements; a movie portraying a horrific scenario with unsuitable music playing over the top. 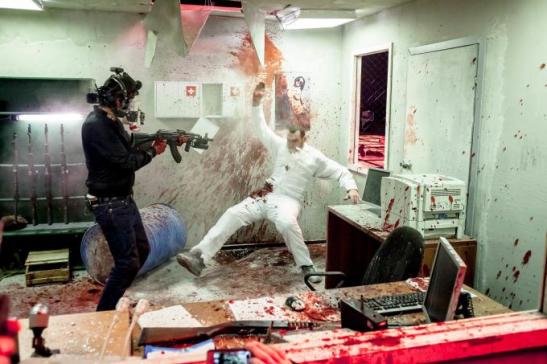 As Hardcore Henry progresses, so does the violence. A lead character gets shot very graphically in the back of the head. A man gets his nose caught in a pair of pliers. Men have their heads smashed in – and worse – sliced in half. Oh yes, the bullets fly, blood spatters, it’s absolute fucking carnage from start to finish. My first thought as I left the cinema was how insane it was, perfect pandamonium. I loved it – at the same time as hating it. I mean, nausea is one thing. The structure of the movie is totally another.
The winning element for me was how this movie was. The production style.

Normally, we sit down as viewers and watch a film where the camera opens on a scene between people. Each scene shifts into the next with or without a booming soundtrack as normal. Filming locations are utilised as normal with actors entering, interacting and then exiting as normal.
Hardcore Henry was far from normal. It strays from the classic style we’re used to, and like the shift from 2D to 3D, whips up a real-time interactive atmosphere.
The POV shooting and use of GoPro camera throughout this movie certainly have an effect.
It reminded me slightly of one of those ‘rides’ you go into at a theme park. Imagine it; you stand with a plastic lazer gun about to embark on a mission through a dusty ancient pyramid. A screen on the rocky wall in front of you flickers into life and the face of a man appears. In a melodramatic tone of voice he instructs you how to take part in the game, but adds a few warnings. That sort of thing.
And this is exactly how I felt whenever Akan appeared on screen. Actor Danila Kozlovsky brings an eerie albino-type threat to the movie, and is a deliciously nasty bastard throughout. I cringed whenever his glaring face got an up-close shot; again reminding me of an interactive game of some sort. 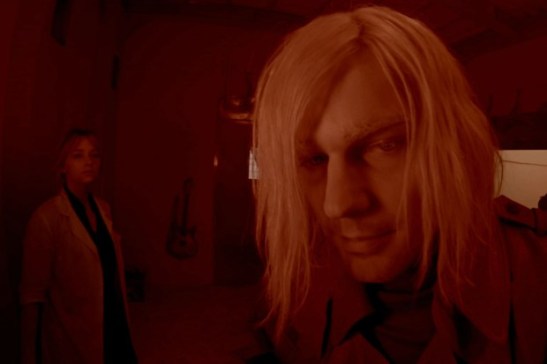 And then there’s Estelle (Bennett) whose face is so frequently streaming with tears and mascara, that she almost resembles one of those open-mouthed kidnapped girls in an arcade game from the early 90’s. 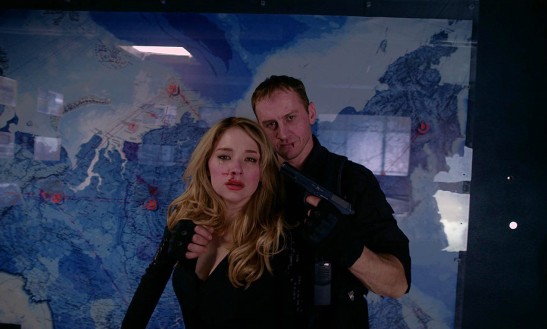 I think I’ve hit the positives.
Now for the negatvies.

Although played out in first-person view, I disliked the camera work at certain points. I purposely sat in one of the very front rows so that I could experience a simulator effect. Be right in the action (albeit discovering I wanted to vomit violently). But during some scenes it was literally as though Henry was just holding a camera out in front of him. As though I was looking through a camera situated a few inches from his forehead. The first-person effect became first-person-and-a-half. 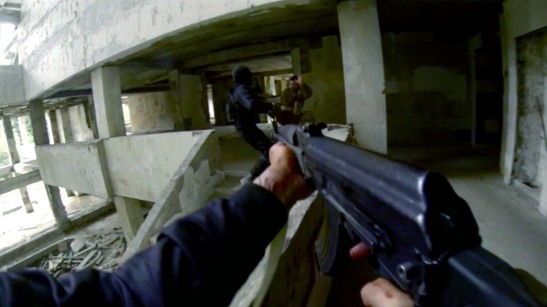 Another moan is his general route. Near the beginning of the movie when Henry is on the run, he seems to have his route planned with immaculate strategy. Seeing as he has no idea where he is going in the strange neighbourhood, he seems to run into people or places  that are linked to his pursuit. I.E. he takes shelter in an abandoned apartment block, and yet his enemies are there. He attains a car – with bad guys surrounding it. Even coming into contact with a group of female citizens on a grassy patch, gun shots are fired at him. It’s as though a national alert was put out for everyone – wherever they were –  to hunt Henry.
Everyone in every place is dodgy, ensuring a plot which held very little surprises.

Hardcore Henry – absolutely disgraceful. But fucking fantastic. This movie is a middle-finger salute to the likes of Hitman: Agent 47, and Taken. Whereas those ones focus on an in-depth plot involving family members or fellow work associates, this one sticks a gun in the protagonist’s hand and gives him the run of the screen.
And the actors in those other movies have cameras gliding around them at all angles, offering nice panoramic views, etc.
But this one is different.
I couldn’t believe how I felt when I left the cinema after watching this movie.
I wanted to be sick. And yet I was completely and utterly entertained.
I loved it.
I hated it.

Hardcore Henry.
Shocking – in every sense of the word.

This entry was posted on April 19, 2016 by rickysfilmreviews.