As a war between rival queen sisters Ravenna and Freya escalates, Eric and fellow warrior Sara, members of the Huntsmen army raised to protect Freya, try to conceal their forbidden love as they combat Ravenna’s wicked intentions.

What I disliked most about The Huntsman: Winter’s War was how unnecessary 60% of it was. The other 40% was mildly entertaining – and grossly predictable. Here are just a few of the unnecessary elements:

– backing cast who literally became background; having very little or no effect on the movie at all

– the boarding school-style atmosphere of Ice Queen’s castle. It seemed to be a camp for sporty teenagers.

– Minimal set making up the Ice Queen’s “palace” included a few straw huts and a tall iced wall with a small platform in front of it. With barely any effort made on the setting, this saw the lead actors mainly stood in one spot delivering speeches or pacing a restricted area for most of their screen time. The only ones to make the most of their surroundings were Eric and Sara.

I say ‘mildly entertaining’ – I’m just saying that to be nice. If I’m honest, I wasn’t entertained at all by any part of this movie. I found the feature almost painful to watch. It opens with a lead character telling a bit of story in that classic husky whispering tone of voice, before introducing the other people.
Time passing shows two lovers and their transition from children to adults, and how they part ways, etc.
The tale of two siblings who become separated by a feud which came from one of them doing something nasty out of jealousy.
The quest to salvage a precious artefact or other shiny item which has been stolen and dragged across the country on horseback..

I’ve seen it all before, I really have. And this movie is the second instalment of Snow White and the Huntsman, a sequel as well as a prequel – so I found it tedious how incredibly dull the producers made it. This movie lacked the excitement and dynamics it should have contained for such a story. Sat watching ugly dwarves flirting, two lead actors try to be as entertaining as possible by speaking with Scottish accents, a bunch of kids who stepped up to perform – then stepped down like unenthused Divergent cast… was horrible. 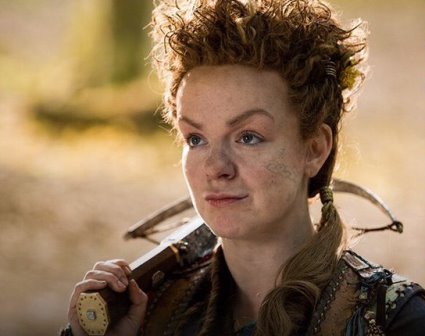 Nion (Frost) and Gryff (Brydon) appear near the beginning of the movie to come to the Huntsman’s aid. And (I assume) they are there to provide the comic relief.
Except there’s hardly any comic action. At all. Every line spoken – by Frost in particular – made me cringe, as though it should’ve been funny but the way in which it was delivered wasn’t done so properly. Funny became infuriating as the potential humour evaporated into thin air, meaning comedy moments were more serious moments. The humour became drama as the jokes were lost on the audience (I don’t recall any viewers in the auditorium laughing out loud). There was even a scene where the two dwarves and the Huntsman start a fight in a small tavern for absolutely non reason, displaying an unnecessary scene of total violence – just because they could.
The wit was drying up quicker than the Ice Queen’s vagina, surely the movie had to get better?..

This movie is perfect for children.
Wait a sec, no it’s not.

It’s a fantasy adventure based on a famous fairtyale which contains plenty of action and stupid humour that kids would love. But at the same time, a steamy scene between Huntsman and Sara is thrown in, as well as naughty words (Bromwyn played by Sheridan Smith refers to Blunt’s character as “bitch queen” at one point). So yes these aside, The Huntsman: Winter’s War is an entertaining watch for little ones. The movie is plenty to keep them on their toes, helped along by a story which is so simple that it’s more than easy to absorb. In fact, the story is so simple it’s as though the writers were lacking something. Many other movies have something to grasp, to empathise with. To be involved with. This one is just: boy and girl in love, boy and girl seperated, boy and girl meet again, boy and girl fight their nemesis. The end.

Something must’ve gone right, I just never noticed it.

This is one to avoid if you have any sort of good taste in movies. I personally wouldn’t watch it again even if I was paid to do so.

This entry was posted on May 5, 2016 by rickysfilmreviews.