Three years after Mike bowed out of the stripper life at the top of his game, he and the remaining Kings of Tampa hit the road to Myrtle Beach to put on one last blow-out performance.

I actually still have copy of the ticket from when I saw the first movie: 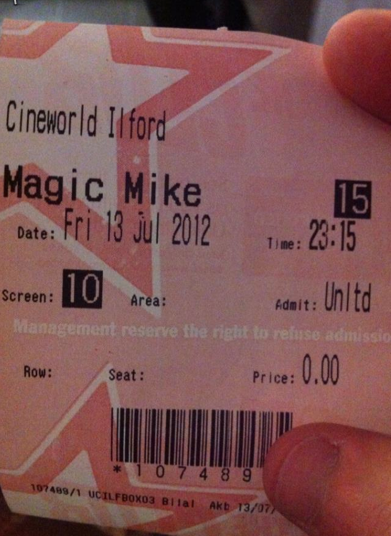 Magic Mike does the Disappearing Act

..what in THE HELL was that?
Myself and my friend Emma (yes, another occasion where I didn’t go to the cinema alone!) were quite excited for Magic Mike XXL. We’d seen the first one and were ready for some slick hip-pumping, raunchy fun.

What we got was a dull, tedious movie dragged out with almost completely irrelevant dialogue between characters. And I’m not exaggerating either; a perfect example is where Mike stands on a beach front, peeing. A young woman approaches him from out of the darkness, and they begin to talk.
And talk.
And talk.
And the talk wasn’t even anything interesting. At one point, Mike mentions riding a boat across to the island opposite and the female disapproves at this. And bang – on to their next topic of conversation.
My friend actually said out loud in the auditorium, “what IS this?” – to which (arms folded, eyed wide) I grunted in response. I wasn’t having as good a time as I’d hoped, and it appeared Magic Mike had performed the best trick he could possibly do given the cinematic situation – the disappearing act. Literally any buzz, any hype the first movie churned out was non-existant here. This movie was the fireman’s hose to a heated blaze, instead of giving the audience the type of fireman they needed. I mean, what on earth had happened? 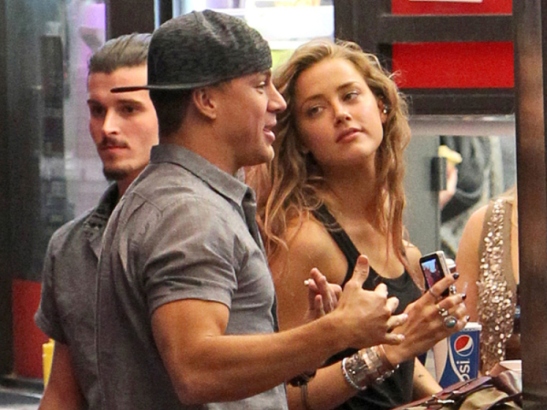 Another scene sees the group of strippers sitting in their vehicle as their chaperone drives them to the convention they’re about to perform at.
And it’s full of idle chat again. Topped with an impressively awful performance from Tatum, when one the guys throws his mobile phone out the window. His reaction and quality acting during this is that of ‘knocked the napkin off the table in restaurant’; his acting is just hideous. Any other actor would display a performance where the character actually cares – Tatum however, isn’t that passionate when it comes to acting. 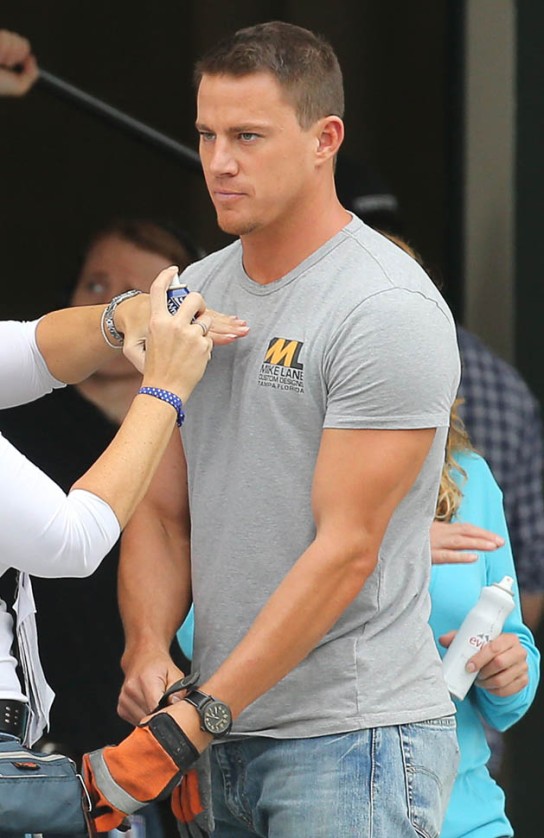 The movie continues with the boys travelling to the convention. Along the way, they stop at the house of an old flame of Mike’s (Pinkett Smith) who is hosting a house party of a different kind..

I must say, the action involving random women during this scene is brilliant. Many black women (not a racist jab – they genuinely are all black) having the time of their lives as various male strippers appear from the shadows to hump their way round the room – and the women. This scene was honestly the only scene in the movie I enjoyed. And that was because of the performances given by these unknown females. Yes, I was so unentertained by the main cast that in reverse, it was the backing support who actually won me over!
One (rather large) lady is targeted by a stripper during the scene, and it is hilarious. The way she tries to move herself about the table he puts her on had me laughing out loud. It then continues with a few other cash-throwing women who are thoroughly pleasured by the bulging men, and its screams aplenty for the next few minutes.

But the scene ends, and its back to the moaning guys as they continue their road trip.
Another comment from my friend: “what the fuck? Who wrote this script?!”
I had to agree. I was bored senseless by the lack of stripper action and irrelevant conversation on screen. This movie held none of the qualities that the previous one did, and I was considering leaving the cinema.. 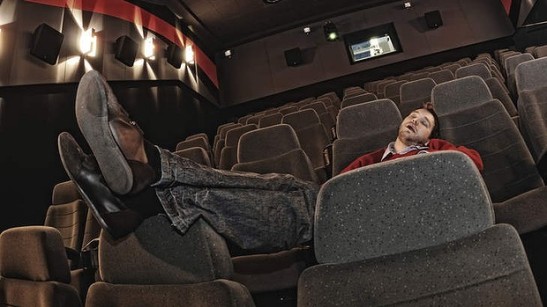 One thing this movie was great at was stirring up a bit of sexy dancing, before cutting it short and returning to a scene involving normal acting. The producers seemed to blow hot – very hot – then cold.
Dancing.
Chatter.
Dancing.
Chatter.
One scene sees Mike get down to some seriously sensual wriggling in his garage. And he gets proper into it – then finishes, and the movie switches over to a different scene.
Although the movie does contain some stripper performance, it doesn’t contain enough; what the boys give us is very short-lived and nowhere near as exciting as it should be. This is where the switching of scenes happens also, thus blowing hot and cold on the audience and leaving no time for them to get geared up. This is the reverse of what the first movie did. 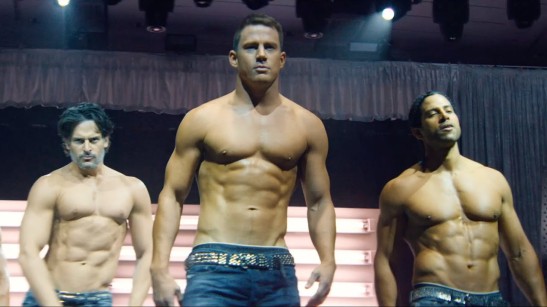 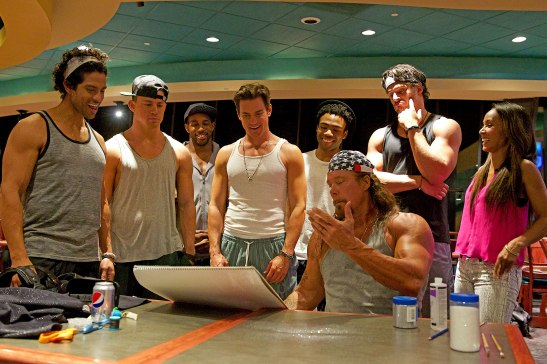 Magic Mike XXL was basically director Gregory Jacobs saying to Channing Tatum, “this is a movie about what YOU personally used to do for a living. So just have fun and bring it again, don’t worry about the acting”. Literally. I mean, let’s face it – Channing Tatum is no award-winning actor is he? The man displays nothing but sex appeal throughout any movie he stars in; he is on stage (or in front of the camera) because of his toned body, not because he can act. And this movie proved this perfectly. Especially during a scene where he gets up and dances for a crowd of women; Mike struts to the front of the stage and crouches down – then bursts into genuine smiles as Channing appears. As though the cameras disappeared, the actor began smiling as himself – and it was easy to notice. Movie gone, this had just turned into a documentary about Channing himself and how well he can move.
Watching Magic Mike XXL was like being back in Drama class at school; the teacher purposely putting one of the popular kids on stage to deliver what he (or she) is great at, instead of actually acting. Everyone is aware that the kid has a big background in dance or other skill, therefore the cheers go up the second he / she appears on stage – because it’s them. Not a character. No acting required, this kid overrides any need for dramatics – because they can. And they know they’ll be getting cheered on anyway. 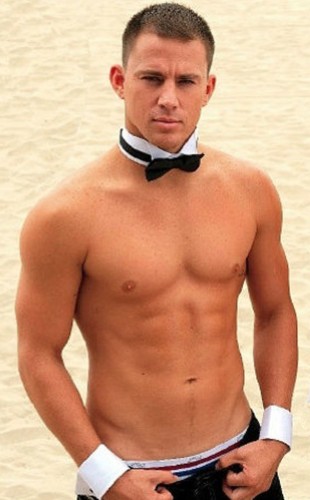 Channing Tatum used to be a stripper before he became an actor.
He needs to make us aware of this in his movies.

Magic Mike XXL was just shocking, from beginning to end. Pull down the thong of this movie, and what you’ll find down below is as flaccid as you’ll ever find at all. It was nowhere near as fresh and fun as the first and contained a lot of irrelevant scenes which were extremely tedious. Made up of lengthy dialogue between characters, this movie became something of a dull documentary focusing on the lives of male strippers and what they talk about when on the road, between gigs. A movie with this type of story should explode on to the screen with colour, action, and not stop until the gyrating and roaring women are have finished. Magic Mike XXL could have made the perfect hen night or girls night in flick – instead, it nose-dived spectactularly into the world of Mockumentary.

This was something else.
If you enjoyed Magic Mike and are looking forward to Magic Mike XXL – don’t get your hopes up. Oh the boys do get their shirts off and deliver some greasy movement, but unfortunately these scenes are more like clips during a documentary of tiresome proportions. I honestly haven’t got the enthusiasm to discuss this movie any further.

This entry was posted on July 10, 2015 by rickysfilmreviews.