A pair of femme fatales wreak havoc on the life of a happily married man.

Knock Knock gets into the action straight away. Once you’re through the cringeworthy family conversation between Evan and his kids / wife, the day quickly turns to night – and there’s a knock at his front door. And the twisted action kicks off. I had high hopes for Knock Knock. After seeing the trailer for it, I knew I was in for a sinister ride. I mean, what a story! Two young girls screwing over (and screwing) a happily married man and turning nasty as they practically hold him hostage in his own home. This movie had all the ingredients of a spine-chilling thrill ride..

..yet completely failed to win me over. 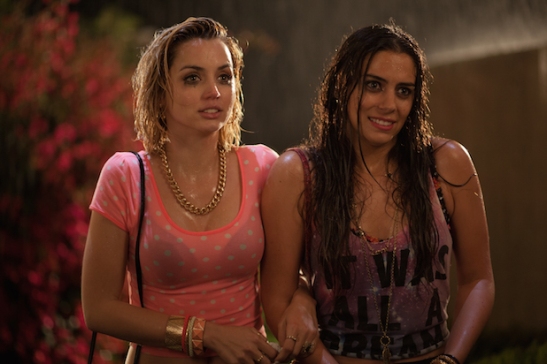 From the word go, I was focused on the screen and ready for action. And the action came – but with results of very low impact. Ultimately, Knock Knock is two young actresses being given a movie set as a playground with the director yelling, “JUST HAVE FUN GIRLS!” enthusiastically before the cameras start to roll. Whilst the story remains plausible and incredibly realistic, the quality of acting used to portray it is – well – a bit shit. Throughout the first hour, Keanu is like watching a man on TV present a documentary about fish; a dull personality delivering dialogue about a boring subject – boringly. He spends a good amount of time playing musical chairs when the girls first arrive, shifting from one seat to another (incredibly high number of chairs in his lounge) as Evan becomes increasingly uncomfortable by the presence of the sexy intruders. The actor only steps up at the end of the movie (roughly fifteen minutes before the end credits roll) when delivering an angry red-faced outburst at being left nearly for dead by Genesis and Bel. But even then he had the audience laughing – yes – laughing at his delivery of a distraught man. It wasn’t great, Keanu seemed to coast through Knock Knock purely by frowning and raising his voice. Not much effort on his part at all, which made me wonder..

..is Keanu Reeves a good actor? 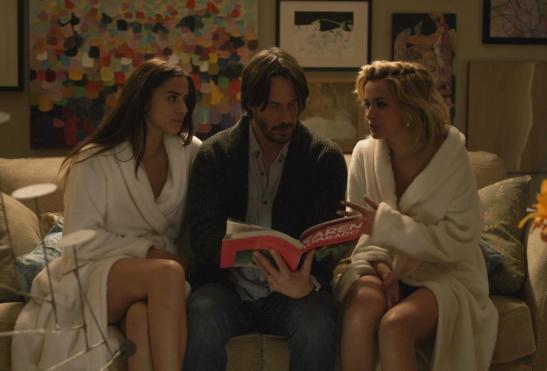 He doesn’t exactly knock ’em dead during this movie. I’m just not convinced. I may have to watch a few of his features to decide on this.

Lorenza Izzo (Genesis) and Ana de Armas (Bel) do a good job at being forceful, threatening sluts. They deliver the dirt with manic, immature characteristics which come across as slightly scary, however, the pair were also missing something. Very low on nastiness, they came across more ‘naughty school girl’ than psycho bitches – which is what I thought the movie would entail. One scene in particular – the morning after – sees Evan wake up to find the pair throwing food around his kitchen and devouring various substances (of food. They already had a generous helping of semen the night before), like two wild animals. This scene was too giggly to be scary or threatening, thus dissolving any lingering tension from the previous scene immediately. Not good. 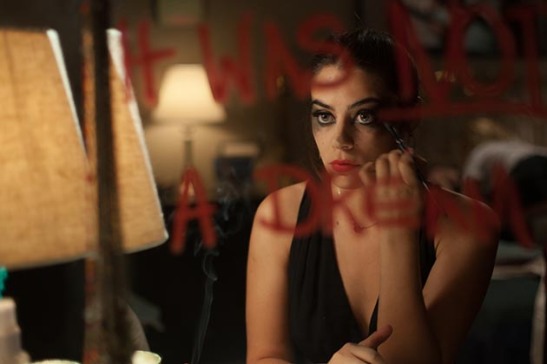 Izzo and De Armas fit the bill as two young naive young oddballs, but come across more St. Trinian’s than satanic. They needed to step up their act and be more nasty, there was way too much giggling involved and in the end they actually reminded me a bit of Paris Hilton and Nicole Richie in reality TV show The Simple Life; carrying out random acts of daily routine but messing around and making a mess of it. The pair don’t even come close to some characters I’ve seen in emotional torture movies in the past. When I saw the trailer for Knock Knock, I imagined some proper twisted and psychological action – like 2005’s Hard Candy. Now that was some sick stuff. Ellen Page turned the tables and did good there. Unfortunately, Knock Knock didn’t live up to the same sort of standard. The girls were quite tame.

What I found most surprising during this movie was the audience’s reaction. Laughing. There was plenty of laughing out loud from various audience members at certain points, including the more serious of scenes – which instantly pissed on and extinguished any tense atmosphere created. Two girls sat behind me were genuinely howling with laughter during a deadly serious scene where Bel and Genesis begin to bury Evan alive in his own garden. This quickly escalated into loud laughter all around the auditorium, as Keanu’s ropey acting came into play. His portrayal of a hysterical man being buried in the ground consisted of completely still head and hardly any facial expressions whilst just screaming. I really tried to zoom in and absorb the moment of the movie, but I couldn’t; the audience laughing out loud totally put me off and diluted any tension created. It wasn’t great at all.

Actually, as I exited the cinema I was walking a few steps behind the two girls who were sat behind me during the movie. One turned to the other and commented, “..it could have been really good?”. Sums it up really. I should’ve just used her comment as this entire review.

Every major element in this movie was forced, from the set through to the acting. Firstly, Evan’s house was way too overdone. Photos and portraits of his family hanging everywhere – and I mean everywhere. As the movie opens, the camera pans slowly through the hall and around corners before ending up in the married couple’s bedroom. Every inch of the hall walls are covered in framed photos of Evan, Karen and the kids. Or Evan and one of the kids. Or the kids. Or the kids and the dog. Karen and a bloody kid. It’s beyond sickly, and at first I thought it was some kind of joke; that director Eli Roth decided to swamp the house in (too many) family photos. It was almost farcical. And if it was a serious element of the movie, then it came across very unrealistic.

Next up was the whole ‘alone in the house’ scenario. Evan starts off being slightly puzzled about the noises coming from outside his house. This is then followed by a lengthy doorstep scene (complete with front door swinging open very slowly to reveal the predator’s faces) once the girls are introduced. Halfway through the movie, certain characters drop by the house as people do – but neighbour Vivian (Colleen Camp) comes across as too funny, mainly due to the way the actress delivers her lines and sarcastic facial expressions. I was actually disappointed by her appearance, because I found her funny. Surely the woman should be building up the edgy atmosphere?.. this breaks the tension barrier immediately, which Reeves has to pick up and re-build. And of course, Karen’s work colleague Louis – who comes by the house to pick up the sculpture she left him in charge of. The man is like an amateur comedian who walked on set by accident but was given a few lines to say anyway. He’s silly. Or should that be stupid? Stout and wheezy, the actor stands around adding absolutely no tension to the movie whatsoever, and in reverse, adds an air of total irrelevance.

Knock, Knock is shit, shit. I’m honestly finding it difficult to highlight something good about it. The concept is fantastic – it’s just poorly executed. This movie had exactly the right amount of the perfect ingredients to deliver a nerve-shredding fright fest. But somewhere along the production journey, the team got stuck and in complete reverse, the movie fell on its arse. The script is dull, the performances delivered by everyone are nowhere near tense enough, the plot feels empty, the audience were laughing instead of gasping. I was ready for something completely different – what I got was disappointing, which surprises me massively because Eli Roth has created a few features in the past which I’ve been really creeped out by. A perfect way of describing this movie is when a director who has created one or two very good movies, brings out a third – which is just awful and doesn’t live up to the standard of those previous. A failure.
This is Thelma & Louise – Nickelodeon style.

Knock Knock is worth a watch – if you’re incredibly bored one evening. And I mean bored. Do not go out of your way to see it because unfortunately, it is just not worth it.
A missed opportunity was this movie.

This entry was posted on July 2, 2015 by rickysfilmreviews.