Twenty-two years after the events of Jurassic Park, Isla Nublar now features a fully functioning dinosaur theme park, Jurassic World, as originally envisioned by John Hammond. After 10 years of operation and visitor rates declining, in order to fulfill a corporate mandate, a new attraction is created to re-spark visitors’ interest, which backfires horribly.

Let me make one thing perfectly clear:
Jurassic World is okay.
It’s not amazing, it’s nothing fresh out of hands of Hollywood that viewers haven’t seen before – it is just a standard action movie.
Before going to see it, I’d seen the trailer and listened to the hype. But it really wasn’t what most people are making it out to be. In fact, I think the reason many are speaking highly of it is because of the special effects used to create the dinosaurs. I admit, the graphics are great – but the rest of the movie is average. And to be honest, you can clearly see from the casting and production that the entire budget was fuelled into the jurassic beasts themselves.
I exited the cinema feeling absolutely no different to before I went in, sadly. Because I’d had high hopes this would be a smasher, a breathtaking thrill ride. When actually, the main thrill came from a cluster of pterodactyls escaping from an aviary and attacking defenseless tourists on the park. 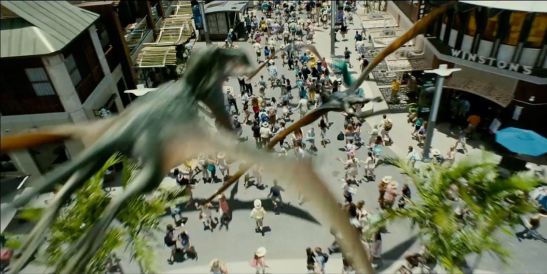 I shall begin with one particular actor who made it their sole purpose to be on screen purely to promote acting classes – due to her needing them so much..

Bryce Dallas Howard who plays Claire is just shocking. And it’s not just me who thinks so, apparently – during one of her scenes early on in the movie a few audience members actually laughed out loud at her performance. And it wasn’t even comedy. The woman stood there, shouting at another character in such a high-pitched panicked voice, it came across as a bit pathetic. Childlike. And so hideously acted, that it had the audience laughing.
I couldn’t fathom whether Bryce was purposely playing a ropey personality, or if she herself was actually ropey. Wide eyes and wobbly head, the woman brought an atmosphere of dumbfounded child, rather than the slick professional she should have been. She genuinely irritated me. Wooden is not the word – this woman was a slab of fucking cedar. 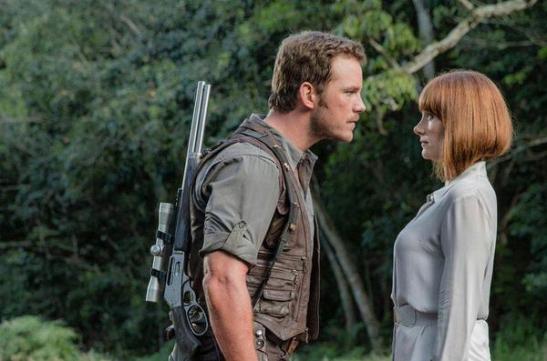 As a character, Claire is relevant. Much needed to pull the story along at a good pace. Firey orange hair and bright eyes the actress radiates a vibrant image; it’s just her performance which is a bit of a let-down. She actually looks a bit like Jessica Chastain (that American actress who is always in movies with strange storylines) – which is ironic, because during the scene where Claire clutches a bright red flare and lets a dinosaur out of its holding facility, she looks exactly like Murph (Chastain) during a scene in Interstellar where she lights a flare in the middle of a field.
I would elaborate further on Howard’s acting skills, but I think you get the picture.
She’s shit.

There are holes in almost every element of this movie; character development and relationships, the script, the direction.. and I’m not the only one to notice this; BBC film critic Mark Kermode mentioned this on his show last week.
Firstly, what I found highly irritating were the random characters being thrown around. Barry (played by Omar Sy) seemed to add a dash of overly dramatic wide-eyed tension whenever on screen yet only popped up at various intervals, making it seem like he was being all ‘Broadway Lion King’ for nothing. (this is not a racist slur, however, he does have the correct skin shade to be part of the Lion King cast).

Lowery (Jake Johnson) is the movie’s main irritant; delivering sarcastic one-liner’s with slowly-moving facial features which ultimately made him come across as – well – a twat.
These random characters give the impression that they are main characters, yet have no impact. Once the camera left Jake (leaving no time for his character to develop), it was back to Owen (Pratt) and his fight to save Jurassic World.. 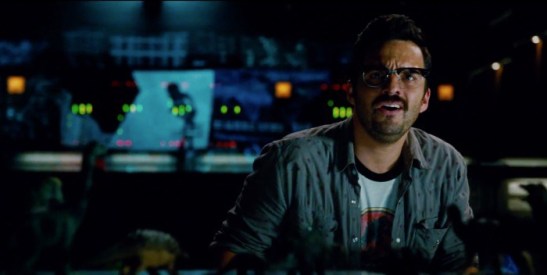 Realistically, this movie is a load of running through dark forest from dinosaurs and park visitors being pecked (and possibly killed) by pterodactyls. The story follows Owen as he leads his colleagues into battle with the beasts, eventually resulting in a ‘claw-off’ between human and dinosaur. The ending scene isn’t bad at all; it is very slick and happens quite fast, with just the right amount of stunts and screaming to make the finale atmosphere quite tense. The only factor which diluted this however, was the fact dinosaurs are no longer living creatures and the concept of man-against-dino was far-fetched, silly. Call me boring, but it’s true. Jurassic Park had its day back in the 90’s and was a refreshing concept – to have the story return in 2015 was just tiresome. 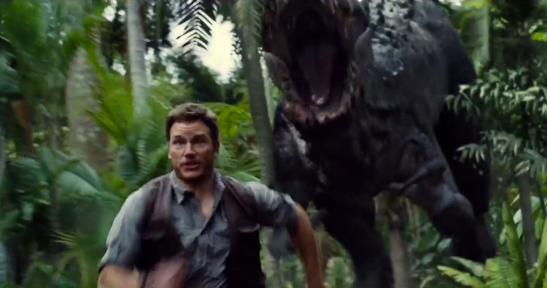 If it’s a standard action flick you’re wanting where the producers spend more money on visuals than time on story, Jurassic World is it. Any scenes involving the dinosaurs are very watchable and done with good effects / CGI, much better than the original Jurassic Park movies. I can’t fault the visuals.

The boys, Zach and Gray. For performing a countdown whilst atop a waterfall, whilst being chased by the Indominous dinosaur.
Yes, instead of grabbing hold of each other and jumping (or each not giving a fuck about the other one and jumping at the first second they can), they stop – stare into each other’s eyes – and Zach mumbles a few words before counting down, “okay, ONE…TWO…THREE!..” – and then the boys plummet into the watery depths below. The Indiminous arrives just in time to snap the air with his rather large teeth.

This would not happen.

A creature like that is inches from wolfing you for its lunch, and you stand counting down the seconds it takes you to prepare to jump. Yes, I know it’s a movie but things like this really get on my tits.
End of rant. 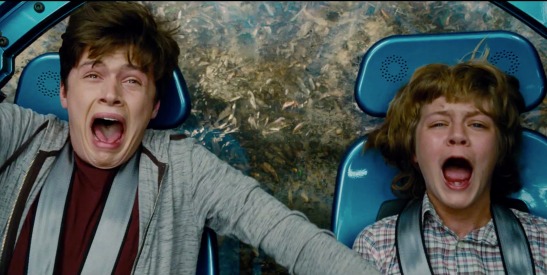 Towards the end of Jurassic World is when the shit really hits the fan, and dinosaurs go head-to-head in a battle which near destroys the park. And leaves a certain handful of humans caught right in the middle..

This scene had me interested. It was very fast-paced, contained a few ‘will they / won’t they’ moments. A lot of screaming and smashing here, but ultimately the best scene in the movie where two dinosaurs get their scales in a twist and have a saur-off. At one point, I did get slightly confused at which beast should win; they both looked the same as they thrashed around screen – I didn’t know ‘who’ I should be rooting for, and to be honest by the time it was over I didn’t give a shit ‘who’ won. All the same, a highly active scene with an engaging showdown. Not bad at all. 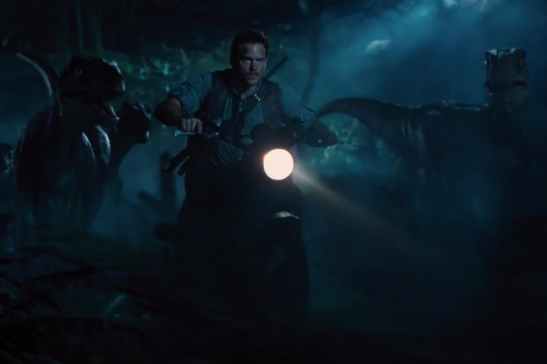 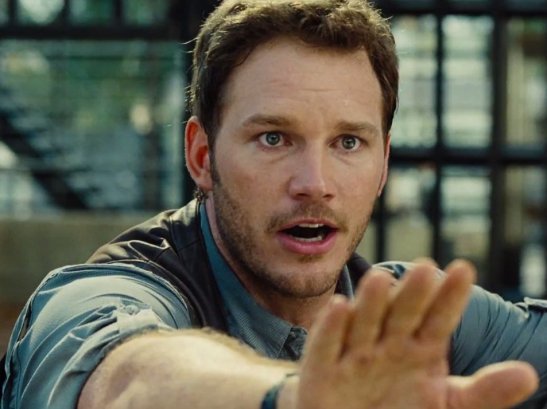 There was one thing – just one – I was craving.. the return of characters from the original Jurassic Park movies. It didn’t have to be all of them, just one or two – to revamp the story and add a welcome familiarity.
Actors from originals who return for a present day installment are brilliant; the familiar face, the on-screen presense which reflects the actor’s enthusiasm for coming back, etc.
I saw Laura Dern (Dr. Ellie Sattler from Jurassic Park) as Hazel’s mother in The Fault in Our Stars recently and recognised her instantly. The actress is still going strong, so having her or even actor Sam Neill return to shake things up – or just cameo – would have been amazing. But it wasn’t mean’t to be. Shame, that.

Jurassic World was alright. For what it was, it delivered well and although attack scenes involving dinosaurs and humans remained average, there was some excellent visuals used in portraying the attacks.
Having Judy Greer as part of the cast was a nice touch, she’s doing well lately – her ‘great aunt’ style figure being used in various productions. As for the rest of the cast, the boys did well – but not the most dynamic duo I’ve ever seen. By no means competing against these were the slightly irrelevant backing characters and of course, Howard – who was so plastic, she’d give Barbie a run for her money.

Casting aside, this movie uses great special effects to bring the dinosaurs to life in sheer colour snd clarity – and the beast which leaps from the water is quite spectacular. It shows though, what the director spent on graphics mean’t the rest of the movie’s structure went to shit.
Jurassic World is worth a watch if you’ve got nothing else to do of an evening, but don’t fall over yourself trying to get to a cinema to see it.
Wait for the rental instead.

This entry was posted on June 24, 2015 by rickysfilmreviews.