There once was a British sailor who fell in love with a Japanese peasant woman. Together, they had a child who they named Kai. However, Kai was soon to be shunned by the Japanese people for being an illegitimate outcast in their world, and sent to live by himself.

But when Kai grows into an adult, he joins a group of Rōnin – a group who wish to seek vengeance on Lord Kira. The murderer of their master and single-handedly responsible for banishing the Rōnin from his land.

The Rōnin embark on a journey.. a journey which ultimately turned this entire movie into a complete sack of shit, and ensured that I will never ever sit through it again.

I will begin this review by saying that this is in my Top 5 WORST Movies Of 2013 – I couldn’t be more sincere about this. Because when I arrived at the cinema yesterday to watch 47 Ronin, I whacked out my 3D specs and got ready for a healthy slice of slick adventure.

..what I got was duller than Hilary Clinton’s vagina, and more sleep-inducing than the first Lord Of The Rings movie. I shall explain why.

Have you ever fallen asleep in front of a very dull film that is on the television – somewhere in the back of your subconscious, you know the TV is still on, but you drift further and further into a cozy slumber…

..BANG!  Suddenly, a loud noise in the film jolts you awake. Your eyes snap open and you look over at the TV, before reaching for the remote to switch it off.

This is exactly what 47 Ronin would do to you if you sat down to watch it on television, I’m sure of it.

Its sleepy, dark atmosphere and painfully lengthy dialogue almost sent me off to sleep in the actual cinema – an effect no movie has ever had on me in a public place. Getting comfortable in the cinema was not an option – because this movie ensured my body went into complete shutdown within the first 20-22 minutes of its screen time. 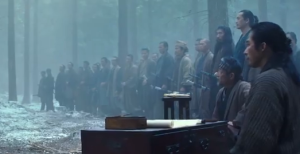 The set and costumes were the elements of the movie that made it special. I can’t fault them at all. Colourful to the extreme, you are surrounded by traditional Japanese homes and gardens. Wispy clouds billow around Bonsai trees, the moon sits gigantic in the dark sky, etc.

The battle scenes between the enemies are steeped in rich tapestries, bright outfits and hundreds of weapons. This is all cradled in some lovely set; a massive battle ground lays the scene splendidly. And of course, costume..

Traditional Japanese clothing is displayed with sheer elegance. The women in kimono’s, the men sporting some lovely knee-length boots and dapper shirts. Everything you could expect from this aggressively quaint country is on show; from ladies jewellery to the mens swords.

If you’re a fan of Japanese culture, you may be wowed by what’s on offer.

I must say, the scenes involving the witch Mizuki were fantastic. Played by Rinko Kikuchi, she has to be the best character in the entire movie. She’s smooth yet sly – and deliciously evil. Everything about her glimmers with such dynamics. Not only does she wear some beautifully coloured clothing, but the character inside these clothes is amazing.

Praise to Rinki Kikuchi for bringing such a character to life; everything about her is performed with a wonderful energy. Her slippery body language expresses a smooth little lady you want to trust.. but who you know could turn vicious at any given moment. She enters and exits a scene with such atmosphere, that I could imagine her on stage in a Pantomime – she carries that exact personality which would extract a “boo” and “hiss” reaction from audiences.

Unfortunately for Rinko, she was cast in 47 Ronin. A complete waste of pure talent. Like sticky-taping a red ruby to a cardboard crown.

Although set in deep Japan – and 99% of the characters being Japanese, everyone speaks in English / American.

Yes, I’m aware this may be a Hollywood smash featuring Keanu Reeves, but the fact is: watching Japanese people – in Japan – speaking English – was just stupid. Perhaps if the director actually let the cast speak in their native language and subtitled the movie, it would have been slightly more enjoyable. At least with a subtitled movie I know its purely foreign, therefore know there is a certain boundary – and may enjoy it more for its foreign quality.

However, Ronin 47 is basically an American movie set in Japan, with the Japanese speaking English. Director Carl Erik Rinsch seriously missed the target here; bringing us what could have been a unique foreign film, but bringing us half that element – with the foreign taken out.

At one point I sat narrow-eyed, head in hand, bored out of my skull – and then the witch made an elegant entrance. And her scene made my eyes light up..

Anything she did – from casting spells to morphing into animals – was visually stunning. At one point, she creates a spider which scuttles off and leaves a trail of purple liquid across a character’s lips. The CGI used was excellent and the rich colours were dazzling.

Mizuki turns into a gigantic dragon at one stage. She sweetly strides along the ground as a human, before spinning around on the spot and morphing into something terrifying; as her clothing flaps and swirls, it starts to levitate and then snowballs into one hell of a scary dragon, which then looks down at Kai (Keanu) before swooping in for the kill.

And then of course for a more subtle creature – she becomes a glowing white fox.

So quite literally, the only special effects worth watching, all centre around this spellbinding woman. Whether she’s hanging upside down from the ceiling, or her hair floats in the form of little snakes, she’s the most brilliant element of the movie. 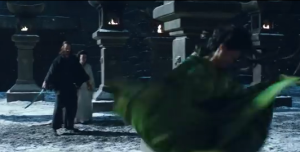 What Am I Watching?

Roughly 50 minutes into Ronin 47, I sat there (arse numb, eyes closing) wondering what the frig I had come to watch. Long speeches and hundreds of background extras dressed as warriors ensured boredom kicked in rather early on. I honestly thought I had come to see a Japanese war film.

Resembling a scene from some famous computer game like World Of Warcraft, the hundreds of background people began to kneel, as the main ‘bad guy’ character raised his sword – and the ‘good guy’ stepped in to ‘defend his people, before moving on to discover…’ blah, blah, sodding blah.

So if you have an older relative – Christ, even a Japanese relative – who likes a bit of war genre, sit them in front of this. They might enjoy it. 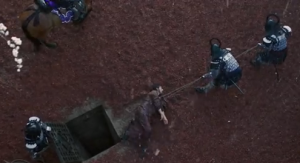 Overall, 47 Ronin failed. In every aspect except special effects. Its dull story, even duller characters and attempts at being funny in scenes which clearly were not, secured its place firmly in the ‘Complete Shit’ category. I have searched online for reviews of it – and believe me, people out there don’t have many good things to say about it.

Sorry Keanu – I know this may have been your big “hey guys, guess who’s back?!” smash – but you should have sliced the bloody script in half at first reading, instead of the bad guys in the movie.

This entry was posted on January 1, 2014 by rickysfilmreviews.