Irving Rosenfeld is a slick, successful con man who lives a rather interesting life. But things are about to take an even more interesting turn, when he meets FBI agent Richie DiMaso. Because Richie is about to force Irving and his seductive partner Sydney into working for him.

Richie puppeteers the pair in the dangerous world of Jersey powerbrokers and mafia. But the strings are about to be cut, as what starts as a mission soon spirals into chaos when lies becomes truth, enemies become friends, and people become – other people…

Firstly, the energy that carried this movie in excellent. Its the core of American Hustle, and ensures the feature moves with good fluidity. The main source coming from Lawrence & Cooper.

The pair are incredible, albeit unrelated and having totally different roles. But in their own separate situations, they are wonderfully full of life, lighting up the screen with the dynamics the movie needs.

The energy in this movie is great. But its as if it doesn’t stop – at all.

Scenes between Bale and Lawrence, or Bale and Adams are spot-on and pump more life into the movie as it goes along. The tension between Sydney and Richie in some of their scenes is fucking incredible – more emotional than his laugh-out-loud scenes with Rosalyn. 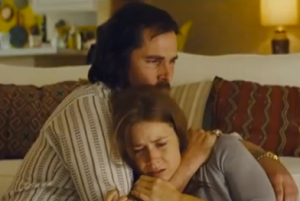 Throughout the movie we see Amy in various elegant outfits – most of which seem to hang loosely at rib-level; thus exposing a healthy portion of tit.. without the nipple. Yes, male viewers will get their money’s worth whenever ‘Edith’ is on screen.

Amy’s hair is great at one point; she has it curled and volumized – a look which she carries off like a proper slut. Its fantastic. I giggled as I thought of her in her Enchanted days. Remember that? Where she plays a sickly-sweet Disney princess?

Good God what a transformation.

One scene sees Richie and Sydney in a nightclub. Brad’s smooth moves kind got my loins stirring if I’m honest. The way he gyrates against Amy is hot.. and with his cream-coloured shirt unbuttoned & wide open.. Fuck me, its definitely a treat for the female audience. And this is before he and Sydney have even made it into the ladies…

Ladies (and some gents) wear a strong pair of pants.

Jennifer Lawrence is single-handedly responsible for many LOL reactions from the audience during American Hustle.

The funniest banana in the bunch, she added a wonderfully funny spice to the movie; be it her self-absorbed attitude, bizarre outlook on life, or immediate comeback lines, she is bloody hilarious.

She is quite different to her previous teen roles (Hunger Games, House At The End Of The Street) – and thank God. Usually whenever I see Jennifer Lawrence in a movie, she’s the lanky doe-eyed victim of heartbreak or some other emotional storyline. She kind of reminds me of the classic girl at school when you’re 15 or 16; tallest girl in the school (too tall for her age) who despite towering over everyone else and having overly tree-trunky pubescent legs, seems to blend into the background easily without drawing much attention to herself.

..only now of course, she’s drawn much more than attention to herself.

I’ve been waiting for Jenny to give us something fresh. Enough with the pre-pubescent girly shit – we want some fire. And boy, did we get it. In my honest opinion, she is the best character in American Hustle. She’s a bitch. A proper vamp, bordering on bipolar. And just when you think her screen-hysteria is finished with, she returns at the end of the movie.. and delivers a laugh one more time. 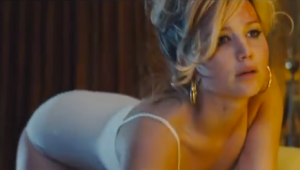 The era is captured splendidly; from clothing to cars, I was drawn into the whole 1970’s feel. The wallpaper in Rosalyn’s flat, vintage telephones and hair styles all bring it to life. And that’s without the gold bling dangling around their necks – brilliant. The movie opens with Irving stood in front of his bedroom mirror, applying his toupee. The scene is strangely long – I wondered why the director found this a situation worthy of being so lengthy, but then it did get a few laughs from the audience.

..so did the scary part where one of the characters yanks the fluffy thing off his head – the look on his face is fucking FUNNY.

I haven’t been this convinced of the time period since Lovelace, you just cannot fault the set. Those who grew up in the 70’s may get a nice feeling of familiarity.

Am I the the only person who adores Bradley Cooper’s teeth? I mean, look at them – a perfect row of gleaming beautiful ‘nashers. They may be real, they may be fake – but they are what us Londoners call “well fit”. As I sat watching American Hustle, I was reminded of how I’d love to wake up in the morning to a smile like that.. and with that hot wolfy look about him, he is definitely on my Ten Most Wanna Nail ’em list. 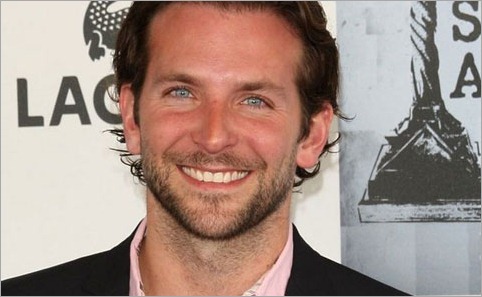 Christ, could you imagine if he didn’t have those beautiful chompers..

Two phrases stood out for me during the movie, spoken by the characters:

Richie: “the more you say no, the more they want in”

Sydney (to Richie): “you’re nothing to me until you’re everything”

How true, and deep.

American Hustle wasn’t all fast-paced and high energy. In fact, halfway through I lean’t back in my seat, switched arse cheek, and sighed. You know – that deep “fuck sake” sigh you exhale during tedious movie scenes..?

Although a consistent film which moves with fluidity, it also hits speed-bumps and skids in at certain points. If it didn’t contain the brilliantly funny script or scenarios between characters, American Hustle would have been extremely tedious because of its complex plot – I.E. the hustling of certain people and to’ing and fro’ing of their plans.

However, if you do happen to be a fan of these baffling movies crammed with crafty people and their illegal antics, then you might just love this.

I had no idea Rob would make an appearance. But yes – the borrowed old boot of Hollywood turns up halfway through as Victor Tellegio; a man who insists on one hell of a deal for Richie and Irving.

I actually heard one or two members of the audience exclaim in surprise when he made his appearance. I was the same. Whoever was sat near me got another FSOL (“fuck sake” out loud) – I mean, is there going to be a movie of recent times that he won’t be in? Nonetheless, he is generally typecast as a dark mafia-style bad boy, so I suppose it only fitting he pop in to help out the cast of American Hustle.

Why does Jeremy Renner remind me of Michael Douglas?

Honestly, there is something about him – every time I look at him, I’m reminded of Michael. Could it be the rugged looks? The face? Mannerisms? I’ve no idea, but its as if Michael got recycled – and out popped Jeremy. The Michael Douglas from a parallel world, Jeremy proper does it for me every time; he is rugged, smooth.. and looks fucking EDIBLE in a leather outfit (Avengers Assemble). You don’t get a lot of dynamic with the actor though – he seems to play the stone-faced smart guy every time. 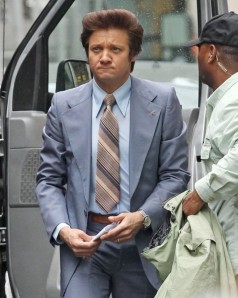 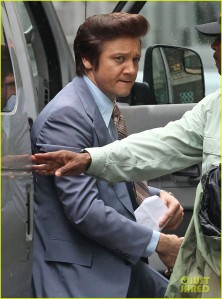 At one stage, we are introduced to the character of Richie’s mother. I say mother.. at first I thought she was his dad! I honestly assumed the deep-voiced woman was a very camp man at first. She is female – but has all the characteristics of a man.

See if you can spot it..

On a final note, I want to know WHY – why is American Hustle so hyped up by people? And how has it won various awards / oscars?

Is it packed with incredible special effects? – no

Do the cast perform emotion like we’ve never seen before? – no

What exactly is the element which is so oscar-worthy? Perhaps its just the fact it has 5 very well-known celebrities making up the cast. The poster displaying these fresh faces has instantly got people thinking, “incredible. Just incredible, this movie deserves oscars”

Overall, American Hustle is very enjoyable. And this is all thanks to the humour and emotion displayed by its five very strong main actors. It has a good plot, a great script, superb talent. My only gripe is its length – much of the movie could have been condensed down and saved a lot of time, because had the script not been as funny as it is, I would’ve been bored shitless. This movie is smart and slick, and very witty.

Fans of these classic hustling movies should give it a go.

This entry was posted on January 3, 2014 by rickysfilmreviews.