But for those of you who are unaware, Matthew Keith Hill is a British author, comedian and television presenter famed for shows such as Harry Hill’s TV Burp and You’ve Been Framed.

Although slightly irritating in appearance, he maintains his ability to keep audiences everywhere chuckling merrily with a surreal, almost narrative humour. And of course, a juicy little career fact about him..

He is a doctor. And he is still on the General Medical Council’s list of Registered Medical Practitioners. So up until now, he has entertained with force in the world of Television – but has now released his own movie. And what is this movie like?..

The Harry Hill movie is in a world of its own. Almost a pantomime, its characters are completely bonkers – its story completely mad. But at the same time, it is incredibly watchable. You know that classic film which is total crap, but you let go straight over your head as you sit watching it? Where you really don’t have to focus on any aspect of it, because the actors literally shout out what is happening, like some school play shown to 3 year olds?..

Welcome to The Harry Hill Movie.

However, its not all fun in the sun because Harry’s twin brother Otto (abandoned as a child and raised by alsatians) has made a return – and has other plans in store for the hamster.

Otto will stop at nothing to steal Abu from Harry, and sends his two henchmen out (who pose as various people with different disguises) to complete the mission. 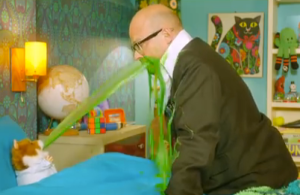 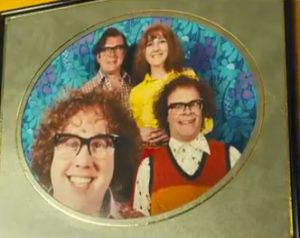 When it comes to playing the bent-backed old granny, there literally is no one better than Julie Walters. She’s almost famed for her squinty-eyed, wobbly-voiced ‘battle-axe’ characters. And in the Harry Hill Movie, she is absolutely faultless. Yet again, she plays out an old woman in the style only she can.

However, as great as she is, it seemed like her talent was wasted in this film. I’m assuming due to the nature of the production she was directed as appropriate – but this was honestly the most tame performance I’ve seen from her. She slides along with the film effortlessly and remains a strong lead character – but overall the film didn’t do her justice. She lowered herself a bit to star in this I reckon.

Julie Walters. She never fails to entertain in any movie or television series she is in. She is an incredibly versatile actress – even as Nan in the Harry Hill Movie, even though all she has is a curly wig, glasses and scratchy voice, you can hardly tell its Julie – she makes the character completely her own.

And of course, when you look at other things she has been in, its amazing – the transformation created for each character. Mrs Weasley in the Harry Potter series for example. Quite different to anything else she’s played before. Yes, even more versatile than your average waffle, Julie Walters is pure talent. 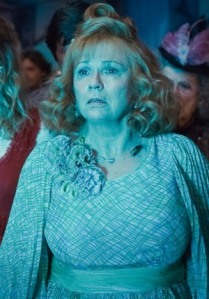 I was surprised at how little Harry Hill was actually featured. I mean, the movie is his own – but he takes a backseat for most of it. What I thought would be our British irritant sticking his tongue out stupidly at the camera, actually levelled out nicely between all characters.

Each character had roughly the same amount of air time, giving the cast a nice even scale of performance. I liked this – the fact it was Harry’s movie, but he didn’t clog up the screen with his antics too much. I wondered about this – getting ready for over an hour of white collar & specs. Nicely done.

If you’re fond of a nice bit of colour – you’re certainly in for a treat with this movie. Honestly. Its almost as if Rainbow Bright was called in on the morning of a hangover, and vomited all over the screen. And this is just at the beginning..

The movie opens with Harry trying to outride Nan on a mobility scooter – and as the race comes to an end and they both pull up outside their home, I almost felt nauseous.. the houses on their street are insanely decorated; sporting bright yellow brickwork, pink / red windows, green doors and blue chimneys.

Bright make-up and costumes, green gunk, pink candyfloss and underwater surprises, it all keeps coming in one gigantic splat. 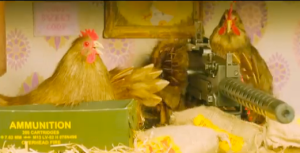 As I sat watching The Harry Hill Movie, I was reminded of a television programme I watched as a child. Here in England (unsure if it was shown anywhere else) from 1993 onwards, we had a show called Zzzap. Shown on children’s TV late afternoon, the concept of the show was a giant 18ft comic that had been brought to life.

The show centred around various characters each with their own two or three minute segment; basically a comedy, information or quiz sketch performed by each one.

I thought of this nostalgic TV show throughout Harry Hill (specifically the character Cutherbert Lilly) because of the things he gets up to. A boxing match, trip to the seaside, Nan fighting her way through ‘Nan-Fu’, comedy obstacles to be overcome. Everything was played out in such a brilliantly animated style – bodily gestures, facial expressions and sounds. 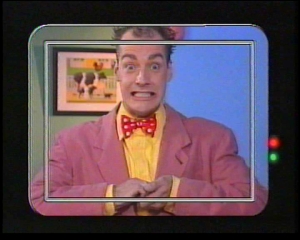 Children from 4 upwards will love this movie. For the little ones, its splendid – in every way possible. It is rated PG, but completely safe – its not as if Nan’s tit falls out or Harry ends up banging his love interest on screen; its pretty plausible. Even the scene where Abu becomes a giant hamster stomping along Blackpool seafront will probably be more funny for kids than scary.

Overall, The Harry Hill Movie is ridiculously entertaining. Wacky meets watchable the second the screen lights up – this is definitely worth a watch. And it is pure Pantomime all the way. But I would highly recommend waiting for the rental – don’t pay bloody £9.80 to sit through it.

My review is based on its utter ridiculousness.

This entry was posted on December 23, 2013 by rickysfilmreviews.