The Hobbit: The Desolation Of Smaug

The dwarves, along with Bilbo Baggins and Gandalf the Grey, continue their quest to reclaim Erebor, their homeland, from Smaug. Bilbo Baggins is in possession of a mysterious and magical ring…

From the very first cinematic display of Lord of the Rings through to The Hobbit movies, I have not been a fan of this genre of movie. In fact I would never sit through this type of movie willingly. The dull grey settings, extremely lengthy narrative and tall statues bore the shit out of me. And this is before the protagonist has even left the village to begin his quest!

..when I left the cinema last night, I almost applauded – The Desolation of Smaug was fucking fantastic.

I think fans of the books and previous movies will bloody LOVE this instalment. From the opening titles, you are hit with continuous action and adventure. Its all given to us by some great characters in a variety of breathtaking scenarios. Many elements contribute toward this movie’s delicious success. And as always, I shall bring it to you chunk by chunk.

As always though, I point out the good and the bad – so saddle up and read on to get your fix of The Hobbit: The Desolation of Smaug…

I have nothing bad to say about the graphics in this movie. Mainly because they are incredible.

Vast snow-topped mountain ranges bubbling with cloud, sumptuous leafy trees and cavernous underground cities are just a few of the delights you’ll witness. At the beginning of the movie, Gandalf ushers the gang of dwarves to safety – and they take shelter in the home of skin-changer Beorn.. this part of the movie involves a rip-roaring chase as the skin-changing being takes form of a humungous wolf.

The dwarves are safe in a barn-like structure – surrounded by goats mainly – and its here we have a close-up of a very pretty house. Of course being dwarves the men are bloody tiny, so their heads just about see over the table top. The wooden beams which construct the house dip low, the furniture is grand and the atmosphere is as mystical as any Hobbit movie can be.

The movie continues with the men heading for Lonely Mountain and encounter one or two obstacles in their path..

One of the first scenes sees the dwarves enter a forest – and walking straight into the web of giant spiders. Legs clicking frantically, the gigantic creatures scuttle toward the men and a battle kicks off.

This scene outdoes any ‘insect attack’ I’ve seen in any other movie – its brilliant. The CGI used for the spiders is visually stunning and as for the spiderwebs.. Jesus, they’re good. I was bloody terrified watching this scene being a bit weary of our eight-legged friends anyway – but watching poor Bilbo get wrapped up in webbing.. AAARRRRRGGGH!!

Only slightly did this scene remind me of that bit in Harry Potter where the kids enter the Forbidden Forest and stumble upon Aragog and his children – that bit made my skin crawl. But this one is a whole new experience.. the leggy creatures drop down on thread, and scuttle over rocks to surround the dwarves – thing is, unlike Harry Potter, these fuckers are VICIOUS, and stop at nothing to indulge in a Dwarf Dinner…

If you’re something of an arachnophobe, you may be in for a shock. This scene will make your skin crawl.

One thing I noticed first about The Desolation of Smaug was the fact Bilbo didn’t steal the limelight. On the contrary, although a main character, he joined the dwarf troop and they all became one. And they remained very strong throughout.

At one point, I thought he’d packed his bags – or rather, stick & handkerchief – and done a runner as the main focus was on our heroic group of little men as they battled forward to their destination. Again, the limelight wasn’t stolen by Baggins – in fact the entire movie levelled out nicely, with each character given their own generous slice of the pie. Especially the dwarves. Which brings me onto my next observation..

Englishman, Irishman And Scotsman Walk Into A Bar…

Why do the dwarves all speak in different accents? Seriously. I felt miffed as I sat listening to one of the men speaking with a Scottish accent. Another ranting in Northern Irish – one pointing the way to Lonely Mountain with a Lancashire twang. And then another speaking in a proper sexy Essex accent.

What is the meaning of this? Is it because the actual actors chosen to play the characters are from these lovely parts of Great Britain and don’t bother to create their own dwarf characteristics? Is it because in the Hobbit story, the dwarves who unite are pulled across from various segments of the UK? To be honest, it does add a slight element of diversity to the whole thing; each mystical man with his own accent – I suppose if they all spoke in a flat monotone English accent, they would bore the crap out of us.

But yes, I was kind of miffed. It was the first thing I questioned as I sat watching the movie.

Wood Elves make an appearance near the beginning of Bilbo’s quest. Two of which are Legolas and Tauriel. They are both beautiful creatures, who create an impact on screen. Thing is, why did they speak to each other in Dwarf – then in English?

There was one point where Tauriel is stood on a hill, about to venture off into the woods and her male companion stops her and gives her a little pep talk. Now for some of The Desolation of Smaug, we do get subtitles whenever a foreign being is speaking.. with these two, we get a discussion in English – before breaking off into their Dwarf language. 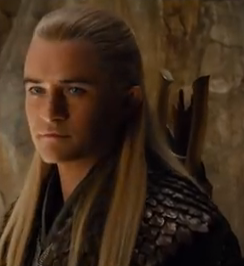 The most enthralling, entertaining scene of this movie has to be when Bilbo enters Lonely Mountain to retrieve the Arkenstone. But accidentally awakens Smaug..

When Bilbo enters the cavernous lair, he pauses in shock as he looks out across the gigantic money box. Gold, jewels and precious goblets fill the space from floor to ceiling. This treasure trove is sparkling, delicious – and the special effects used for the movie definitely peak in this scene.

As Bilbo sneaks up a pile of gold, a few coins drop and slide down the pile. And a giant eye appears – Smaug. This scene is fantastically tense as our main man tries desperately to find the jewel without waking the dragon. But when he does, thousands of coins fall to the ground as one hell of a creature rises from his slumber… 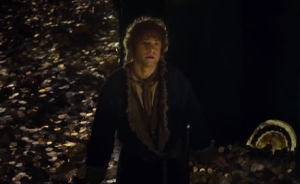 The dragon known as Smaug is epic, in every sense. The effects / CGI used to create this beast are just incredible. Smaug is displayed in such detail – from his huge scary fire-coloured eyes, to his sharp teeth, even the scales on his skin. Voiced by Benedict Cumberbatch, the deadly creature towers hundreds of feet above Bilbo as the defenceless Hobbit stares up at him.

At first, Smaug snakes his way through the cave nicely. In an almost friendly manner, he writhes around as he talks to Bilbo about the reason why he is there. But soon enough, the conversation turns nasty as Smaug pursues Bilbo and the poor little man tries to outrun the dragon, hide, and grab the Arkenstone..

This was my favourite scene, mainly because of the wonderful special effects and tense chase. Its as mythical and exciting as you’d expect. 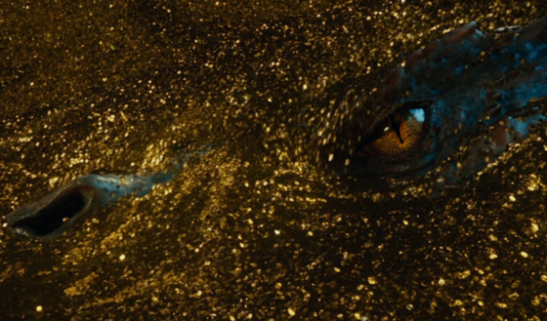 Esgaroth is the Lake-town where the descendants of Dale now live. The wooden shack houses are surrounded by the massive lake, sitting on top of pools of ice. Another lovely use of special effects here.

Bard – the last king of old Dale – smuggles the dwarves into Esgaroth in barrels of fish, lying to the gatekeepers that he is feeding the residents of town. And yet again, a muddle of accents appears.. Bard’s son being proper British and his daughter being Welsh?!

The scene where the dwarves scramble through the toilet and into the house in Bard’s bathroom was quite funny and got a few LOL’s from the audience.

Overall, The Hobbit: The Desolation of Smaug is fantastic. As previously mentioned I hate these types of movies, and hate sitting through them. But director Peter Jackson has brought us something wonderfully different this time round. An adventurous and mystical explosion of entertainment. Special effects are put to use to create beautiful settings and creatures, the cast work splendidly together without fault, and the movie moves with such dynamic force that the entire thing is wonderfully entertaining.

If you’re thinking of going to see this over the festive season – do.

And if you’re a fan of the previous films, Lord of the Rings, or any other feature in the Hobbit franchise.. you’re going to bloody LOVE this. Enjoy!

This entry was posted on December 25, 2013 by rickysfilmreviews.