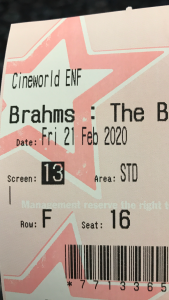 It’s just not worth watching, this second part of The Boy. It would have been ideal had the producers left it at the violent climax of the first movie, but no. Along comes a brand spanking new Brahms doll to cause some new casualties.

From beginning to end the story is petty and simple. It’s basically a couple who move to a big old house with their son, whose naive outlook means he quickly befriends an eerie doll instead of getting rid of the thing. There is clearly a backing story which is explained during the build-up to the family move, but it is portrayed in such a tedious way that it’s hard to tell if this lump of shite is a dramatic, emotional adaptation of a real-life family agony or an actual horror movie. Either way, I genuinely didn’t care – I had a Starbucks in my hand, I got what I came for. I was really only at the cinema to grab a latte and chill out for a bit.

It was just a bit of a shame Brahms: The Boy II didn’t give me chills and instead gave me tuts. I found myself eye-rolling and sighing for most – sorry – all of this movie. It has all the ingredients of a production that is the complete opposite of what you want:

– two parents; one completely oblivious to what’s going on and instead decides to blame the other – and the child’s – behaviour on recent stressful events. The other clearly affected by what’s going on but gets no support as they try and investigate.

– a weird man who lives nearby who appears harmless. Then becomes harmful.

– the family live in a house that is way too big for the three of them, and the nearest police stations is over five miles away.

– mobile phones that usually work suddenly do not work, and someone’s cut the phone line.

– the doll found by the family child allegedly talks to him. But nobody else ever hears this.

– the child’s parents casually accept the bizarre fact that he decides to name his new doll Brahms, even though the probability of him hearing that name anywhere is low.

– towards the end of the movie the child takes the doll’s side (that’s right, instead of standing up to a piece of porcelain he follows its every order), as his helpless parents look on.

– oblivious parent suddenly wises up and begins shouting instructions on how to escape the situation at everybody.

If you see Brahms: The Boy II on a shop shelf and think, “ooh, look, a film about a creepy doll” – PUT IT THE FUCK BACK.
You’ll regret it. And actually probably start to question how poor your taste in film is by the time the end credits roll.

This entry was posted on July 25, 2020 by rickysfilmreviews.