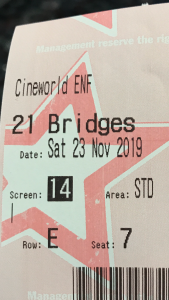 An embattled NYPD detective is thrust into a citywide manhunt for a pair of cop killers after uncovering a massive and unexpected conspiracy.

What on god’s earth was this pile of shite?!
I read the synopsis of 21 Bridges and noted how it beefed up the whole closing of Manhattan’s bridges. A clip from a cinema website reads:

I can categorically state that this movie is nowhere near as involved with said bridges it states. Imagine Titanic being titled Iceberg; with the same movie taking place but the iceberg only being shown / mentioned for a few seconds – or getting less screen time than it did in the 1997 hit (let’s face it, we saw it what, twice?). My point is 21 Bridges had no focus on the roadways that connect Manhattan with Brooklyn, Queens, etc. – this was simply mentioned in passing during the movie. Am I scrupulous? Maybe. But did I want the thrill of authorities yelling instructions as each bridge was dramatically shut down (action that would be unheard of and make a bizarre sight)? Fucking right. Sorry peoples, but if you name a movie 21 Bridges then at least incorporate a tiny bit of bridge. This plot goes down quicker than the Brooklyn Bridge in Cloverfield (2008).

The police characters in 21 Bridges are beyond mundane. Lead cop Davis is assisted in his mission to capture two suspects by a female (Miller) who has as much screen presence as Boris Johnson’s underpants. And you can tell there’s something strange about her from the start, it’s very predictable. And this isn’t the worst bit..

There is such a lack of excitement in 21 Bridges that it becomes almost domestic (literally – the lead cop ends up in someone’s kitchen at the end). Boseman spends a good 80% of this movie standing around, staring intently at things, whilst piecing together events like some detective under sedation – not a member of the authorities trying to thwart two wrong’uns. The camera zooming out over cop cars and him stood there coming up with theories / solutions with colleagues is fucking tedious. The entire thing seems like someone’s dull account of an evening they had whilst observing a police raid in the middle of Manhattan.

The only decent thing about this movie is Kitsch and James who play the two criminals. Between them their performances are brilliant; they bounce off each other effortlessly with Kitsch being the nastier (and slightly sexier) one. His spiteful and murderous demeanour make a gripping watch, and the movie passes for watchable whenever he’s waving a gun around.

And to be honest, the only scene worth sticking around for is when the pair end up in the apartment of a man who aids their plan to escape. It builds up to an explosive outcome which will have action movie fans on their toes. Good work here, even if the rest of the production went to hell.

I would rather deep-fry my own testicles than sit through this crap again.

This entry was posted on December 21, 2019 by rickysfilmreviews.