When a nurse downloads an app that claims to predict the moment a person will die, it tells her she only has three days to live. With the clock ticking and a figure haunting her, she must find a way to save her life before time runs out.

Tacky isn’t the word. This is absolutely diabolical. Its concept wins hands down though for being on another level of stupid: a smartphone app that kills the person who downloads it. Sort of.
Countdown is the sort of film you probably wouldn’t even intend to watch; it’s something you come across by accident when flicking through channels or rolling down Netflix. And Christ knows how it got released in mainstream cinemas around the UK. It’s made from all the elements you’d expect:

Cliché settings such as a high school, a hospital and a bathroom late at night.

‘The Oblivious’ – particular characters who suddenly forget recent deadly events and question why their friend / partner is freaking out. For example, they both get attacked – then later on when one of them has been stalked on their own, the other is incredulous and reacts with a “are you sure it wasn’t the wind you heard?” response or similar. The other character knows something strange has been going on – why would they think a further threat is just their friend’s imagination?
Irritating beyond words.

An oddball character who tries to be hilarious but ends up shattering the entire atmosphere. This comes in the form of a religious man (as seen in the trailer) whose wacky personality undoes the tension of any scary scene. His immature remarks and cartoon-like body language drain the horror from Countdown quicker than the app itself, turning it into a ridiculous pantomime. 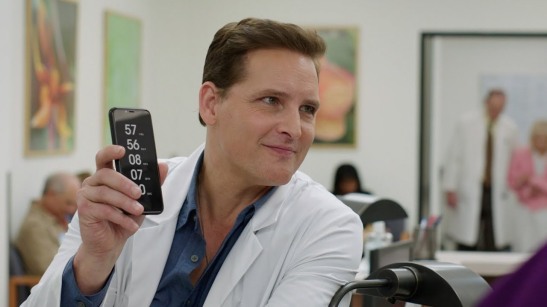 The opening scene was enough for me: barely any introduction or suspense, a group of people at a social gathering are talking – one of them mentions the app – and immediately everyone downloads it. It was beyond ridiculous.
This is one of those things where the trailer is considerably more enjoyable than the actual movie. With a bunch of randoms you’ve never seen before for lead characters and a hideously boring sequence of events following an app download, Countdown is one to avoid at all costs. Your first reaction to the trailer is probably correct.

This entry was posted on December 6, 2019 by rickysfilmreviews.