Following the events of Avengers: Endgame (2019), Spider-Man must step up to take on new threats in a world that has changed forever.

I generally dislike Spider-Man movies (ever since they seemed to wash over Tobey Maguire’s brilliant trilogy and start again). And I absolutely despised Spider-Man: Homecoming due to its juvenile ‘let’s give the world a glimpse of a superhero’s high school life’ attempt. Spider-Man: Far From Home won me over instantly. I bloody loved it.

Fans of Avengers: Endgamewill get what they’ve been waiting for in terms of plot development and closure. This feature continues on from events in the final Avengers movie, and may just quench fans’ thirst for more. Spider-Man: Far From Home carries a more mature vibe as it veers away from the teenage bullshit we’ve seen in Holland’s previous instalments.

Gyllenhaal swoops in to stabilise the movie and provide a solid character who adds an incredible burst of energy. He starts off shaking hands, being an admiration for Parker – then just becomes a total wanker. The anarchy Mysterio causes is engulfed in beautiful CGI at points; toxic green lightning bolts explode across the sky as the actor flies and swirls between puffs of smoke (this new super villain should have been named The Magician). And on top of the beautifully rich colour viewers get some spectacular scenes of famous architecture coming down.
Tower Bridge in London is one landmark to get the chop, and it’s quite an epic watch (I can confirm for the record, the bridge still stands. I sometimes pop to a bakery right near it on my lunch break, and the most dangerous thing happening to it is being spattered with pidgeon shit).

But a lot of work clearly went into the visuals for Spiderman: Far From Home, and if you have little ones I strongly suggest they indulge. Kids will love the high-speed action and colourful clarity it provides, and are sure to be fully engrossed throughout.

The downside to this movie is how it keeps on pausing the action and returning to almost polar opposite situations. For example, halfway through a bit where Mysterio is rising up above a city and growing in aggression..

..the camera pans back to the hotel Peter and his classmates are staying in and a scene unfolds that is delicately lit and carpeted. Big plush beds, throw cushions and chandeliers.. the atmosphere clicks from carnage to calm in under a second, thus diluting the action considerably. Peter’s chubby friend Ned also draws the poison from the scenes with his not-overly-funny dialogue. He is clearly supposed to be the comic relief, but is one of those characters you wish would just bugger off so the genuine entertainment can continue. He’s tolerable but boring. 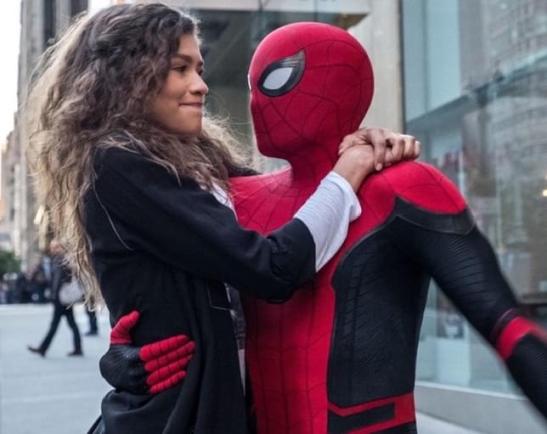 The main piece of publicity for Spiderman: Far From Home shows Peter along with Nick Fury and Quentin Beck poised in a stiff stance.
Is it just me, or does Holland look as though he had just taken a mouthful of water on set? I can see a member of the photography team yelling, “hey, Tom!” – and the moment he turned with a, “mmfph..?” – the flash went off. His face is slightly inflated on this poster, as though he has some form of liquid nestled in his left cheek.
Dentists be aware – you may have a potential high-paying client.
Gay guys be excited – looks like he can handle a lot in those cheeks. 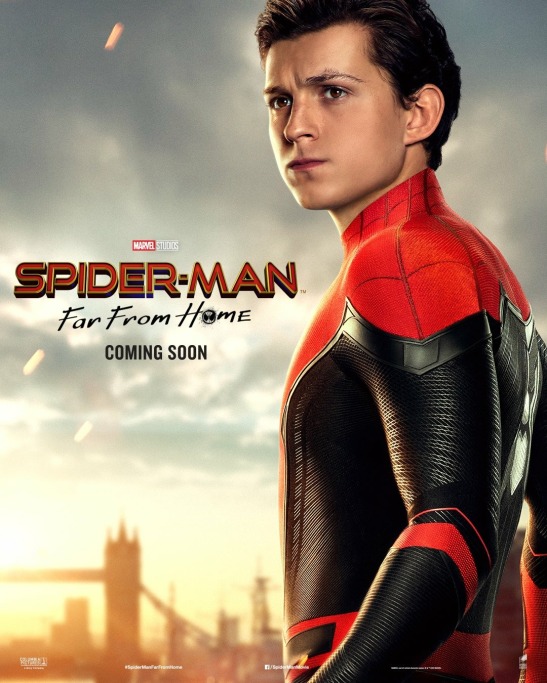 Spider-Man: Far From Home lives up to its name with some beautiful shots of Venice and London, along with excellent special effects. It’s entertaining and witty with a strong cast who gel together quite nicely too. Homecoming isn’t a patch on this slick adrenaline rush, and it’s an absolute treat for Marvel fans. So it pauses the action at points – but the rest of it definitely makes up for this.

Worth a watch whether you’re a Spidey fan or not.

This entry was posted on November 9, 2019 by rickysfilmreviews.