The peaceful town of Centerville finds itself battling a zombie horde as the dead start rising from their graves.

What a terrible, terrible movie. The first question on my lips as soon as I exited the cinema screen was, “what the fuck was that..?” – and not in a positive way. The Dead Don’t Die feeds off of the zombie genre to create an utterly baffling story of its own, which is mediocre at best. When I say baffling I’m being nice; in no other feature have I witnessed such a catastrophic mess of intertwined character stories and badly written scenes. The movie hops from one person to another whilst trying to be hilarious with dialogue – but there is nothing funny here. The actors (Swinton mainly) might use animated facial expressions and drop a dry line or two, but the ‘wit’ ends there as The Dead Don’t Die slowly becomes a stand-up for the actors and ditches the zombies.

During particular scenes it remains questionable whether or not this is an actual zombie film. Murray and Driver lead it into a dull drama based in the small-town police station as they and a colleague discuss survival plans, etc. Where the producers cast the line and reel viewers in is their advertising and cast list. The main poster hung in cinemas looked like this:

A total rip-off, copying the same sort of format as that of Dawn of the Dead, Evil Dead and Night of the Living Dead. This retro way of having Iggy Pop as a zombie with Murray and Driver superimposed on top echoes a 1970’s vibe  but is clearly not of that era.
The Dead Don’t Die is obviously a piss-take of previous movies whereby the dead rise and attempt to take over the nearest town. It borrows elements from the likes of Shaun of the Dead and Night of the Living Dead in order to give the genre a middle finger. Which, let’s face it, is a pathetic and unwanted gesture from producer Carter Logan. More evidence to prove my point comes in the form of ‘talky’ scenes between characters. The police station chat scene (mentioned above) mirrors an episode of The Walking Dead in which Negan turns up at Rick’s sanctuary – but almost the entire episode is them just talking at the gate. And if none of this was the producer’s intentions I will be extremely surprised.

A character beamed up into a passing UFO during a zombie swarm is the last thing I’d expect – and yet it happens here. The Dead Don’t Die is beyond strange, but in more of a stupid way than entertaining. To add to the cringeworthy screenplay, Driver’s character at one point suggests he and his cop colleague are actually in a movie. A line he drops about something happening being ‘part of the script’ just isn’t funny. It struck me as plain bizarre why Ronnie had to break the fourth wall. What the fuck was I watching? 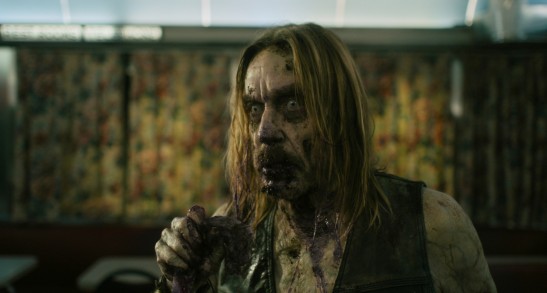 Christ knows how – or why – Tilda Swinton signed to be part of this movie. The woman has a history of decent performances (the incredible difference between characters in Suspiria 2018 and Trainwreck 2015 are incredible). Here she plays a Scottish funeral home undertaker, swinging a gigantic sword at any given opportunity. I genuinely felt sorry for her being cast here.

How do you dupe a load of people into watching a god-awful, poorly executed movie?
Plaster a poster of Iggy Pop emblazoned with a few popular names everywhere. That’s right – we’ve all been fooled. Avoid this movie at all costs if you have any respectable taste in the zombie genre.

This entry was posted on October 26, 2019 by rickysfilmreviews.