The story of Dick Cheney, an unassuming bureaucratic Washington insider, who quietly wielded immense power as Vice President to George W. Bush, reshaping the country and the globe in ways that we still feel today.

Half of this movie is funny.
Half of it is average.
All of it is very political.

If you sit down to watch Vice it would be best you are well up on current – and past – affairs. It bleeds an unstoppable flow of heated debate between top politicians and their peers throughout. Fortunately though this is mixed with some comic moments and insight into the life of Cheney as it plods along. Adams is the lead talent in delivering the story; her transformation into Lynne is brilliant with the woman looking the part and acting her socks off. She is made up to look older and a bit ropey which gives the movie an authentic feel, and a bit of comedy too.

Bale as Cheney is just brilliant. He gets well into character and smashes it with a highly convincing portrayal of the 46th vice president of the United States. Keeping a fine balance of comedy and seriousness his ability to steer this movie forward is faultless, so top marks here.

With the above said, something about Vice is incredibly shit. Not only is it clear to see it has been directed by someone who has spent way too much time in the pub with friends he studied at film school with, some of the gags are average too. Rolling the end credits halfway through the movie for fun is just plain weird – it’s not funny nor questionable – just weird. And it’s such a brief moment that it seems irrelevant also. As well as this some of Vice tries to be arty by containing cutaway clips of various events – presumably to prove a point when highlighting certain subjects – but it just looks overdone. 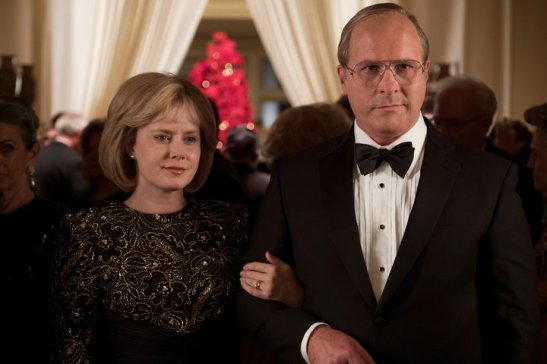 Of course there are going to be viewers out there who think this movie is the dog’s bollocks – not me though. My experience was more of glancing across the cinema at one or two older people – whose sense of humour is way more politically shaped than mine – laughing their heads off, and me wondering what was actually so funny.

This entry was posted on April 27, 2019 by rickysfilmreviews.