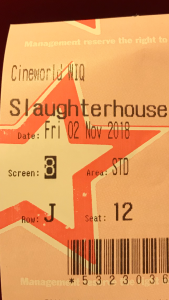 An illustrious British boarding school becomes a bloody battleground when a mysterious sinkhole appears at a nearby fracking site unleashing unspeakable horror.

Slaughterhouse Rulez is a shocking attempt at comedy. What begins as a young man being shipped off to a secluded private school slowly becomes an insufferable portrait of class life. The main focus is on relationships between bullies and victims, and between teachers and other adults. The problem here is that these stories wander off into something incredibly uneventful. It’s like watching a documentary about a boarding school unedited, so that all you see on screen are gatherings of children attending talks with the principal or sneaking round the back of the main school building for a cigarette. But just as I began to wonder what the point of any of this was, Frost appeared..

..but had just as little to offer as the characters inside the school. Woody, the leader of a group of frackers, is dull and not the slightest bit funny although you can see the actor is (half) trying to be hilarious he just doesn’t pull it off. It’s like watching subtle scenes being played out in an episode of Eastenders or something – only 100% less dramatic. Which made me wonder as I sat watching, why the hell this “movie” was actually a movie and not just a straight-to-TV type thing. None of the plot, characters, writing, actors or time spent getting Slaughterhouse Rulez up on to the big screen deserved to be there. Not one part of this uneventful feat warranted cinema time, and if I had to sum it up to anyone I would say:
A Tesco Value Harry Potter film.

Slaughterhouse Rulez contains practically all the substance of Harry Potter:

The school uniform is similar to Potter’s.

Slaughterhouse is divided into houses.

The classmate / peer demographic is the same.

I was convinced the second the ‘forbidden’ forest was mentioned that this film was a spin-off of J.K. Rowling’s creation. And if that wasn’t enough to render me unimpressed, the entire screenplay was beyond shabby. With a set that looked like it was ready to fall over at a single touch, and having the core story centered around a fracking site (yes – fracking site) mean’t one of 2018’s worst films was quickly becoming THE worst film of 2018.

It was about 25 minutes in I started to feel tedious with Slaughterhouse Rulez; you know that aching inside as you sit wanting something entertaining to happen. A silent sigh as you cup your chin in your hand. The folding of your arms in front of you. The “what the fuck is this?” reaction.

The only problem was the film continued as uneventfully as it began, an examination of school life and the murky histories and relationships of kids within the institution’s walls. Two girls wander around chatting the arses off the lads as though it’s a university Fresher’s Week. Two younger boys (obviously) are pranksters who enjoy a good explosion and other mischief. One character has to be stunning, with a less attractive friend. Another character has to be overly curious about the school, with a “I told you – DON’T go down there” friend.

The bullying prefect who feeds on giving people their marching orders.

The estranged parents who not one student seems to be able to contact, nor do they give a shit when a student does make contact on the phone..

This film is an insufferable cesspit of cliché characters and scenarios which isn’t saved by any part of it. I’ve seen films in the past that are awful but have been saved by a particular element, such as an effective actor or unexpected scene. Slaughterhouse Rulez however drills itself deeper into the shit – just like the frackers – with every passing minute, until it collapses into another ‘Frost and Pegg’ piece of garbage. Those two have had a few great films, and one or two terrible. This one joins the latter.

I don’t know what I was expecting, but it certainly wasn’t this. And Christ only knows why Margot Robbie got involved! Unbelievable.

This entry was posted on December 29, 2018 by rickysfilmreviews.