In a small town in Massachusetts, a group of friends, fascinated by the internet lore of the Slender Man, attempt to prove that he doesn’t actually exist – until one of them mysteriously goes missing.

Slender Man is based on the fictional supernatural character which seemed to take America – and a good percentage of the rest of the world – by storm. And as such, it makes a deliciously sinister story which is portrayed by a handful of young women who power it nicely. For what it is, Slender Man serves up a decent serving of high school horror – without the cliche stuff like blood-spattered lockers or gore. On the contrary, this movie takes the psychological route. It whips up an air of paranoia which mainly stems from the victims imaginations after they have watched the Slender Man video. Similar to 2015’s It Follows, this movie plays on the fact that something is stalking the kids that they can’t quite see – until they come into contact with a strange looking man..

This makes an interestingly twisted plot that is different to most young adult horrors these days, so it scores points in that area. 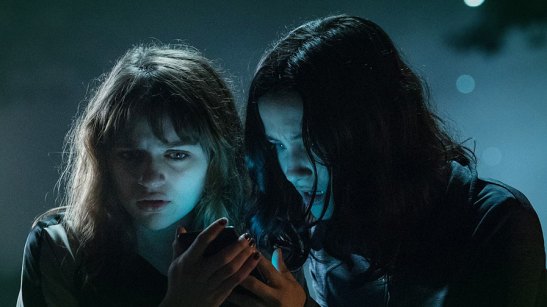 This movie was nowhere near as scary as I wanted it to be. I left the cinema neither disappointed nor satisfied. It had an average impact on me. At the same time as stirring an atmosphere of dread it seems to spiral into family strife and the niggles in relationships between friends. Dark in direction the main focus is on the four friends and the aftermath of their looking into the Slender Man myth. But as well as strange going’s-on there runs a tedious undercurrent of peer life; school crushes and predictable rendezvous between them. Alcoholic single parent. Sibling relationships. It’s almost as though someone merged an episode of Hollyoaks with spooky Halloween visual effects, which results in more of a drama than a shit-your-pants-scary horror film. I mean, I didn’t expect to fully shit my pants (although I had downed a Starbucks vente latte when I arrived at the cinema so anything’s possible downstairs), but I at expected at least a handful of, “oooh…god” moments provided by tense moments on screen.

Didn’t happen. Instead, Slender Man simply churned out the tale of a missing girl which led to one or two sinister happenings but nothing on the scale I wanted.

Slender Man is one of the lightest horror movies I have seen. It is a glass of water compared to a glass of Ribena – plain. Its scene development is fluid with plenty of continuous action, but equally it fails to bring genuine frights. It’s one of those weird ones; portraying the story of something nasty but in a way so subtle that the viewer is invited to empathise more with the characters, than sit in anticipation of the scary action about to happen on screen.

Maybe the tale of the Slender Man isn’t supposed to be scary at all, and this is in fact a drama created to make it more familiar with the world. Who knows.
Expecting the fright of your life? Don’t. Slender Man contains around 2-3 moments that could make you jump if you’e well adjusted to horror. Of course if the most tense you’ll go is an episode of Broadchurch then you’ll probably shit your pants.