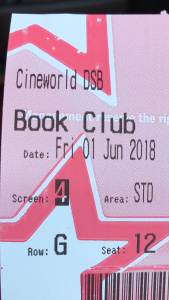 Four lifelong friends have their lives forever changed after reading 50 Shades of Grey in their monthly book club.

The only thing worth watching this movie for is..

..absolutely nothing. At all.

Book Club is a bottom-of-the-barrell-scratching attempt at entertainment with one or two of the leading cast – like their careers – clinging to their screen time for dear life. As one cringeworthy scene after another unfolds, the whole thing becomes an examination of how desperately needy some older women can become as their families go their own ways. And it’s really not a pretty picture. Book Club throws together four Hollywood actresses who are vastly different to each other and puts them on stage to portray women with issues:

A woman who either can’t seem to get dates or hasn’t felt the touch of a man in so long she’s forgotten what to do.
A woman with a super-power ego who seems to think she has men at her total control – but of course remains lonely and as fiercely independant and untouchable as possible.
A woman who thinks a jumper that practically covers her entire body head to toe is acceptable for a date.
And another woman who is in serious need of a laryngoscopy from an ENT (ear, nose and throat) specialist.

The final character description above may sound strange but I speak in jest – as well as truth. Steenburgen who plays Carol croaks her way through the movie so distinctly that every time she speaks it sounds like she’s stifling a cough. You know those moments when you’re trying to hold back a cough as you continue speaking to someone – she’s a bit like that. Even the scene where Carol stands watering a plant whilst reading Fifty Shades of Grey, she exclaims, “oh.. raaaooollw” which I assume should be “oh wow”. Sort it out woman.

If you catch a glimpse of an advertisement for Book Club your first reaction is probably correct. And that famous phrase, ‘don’t judge a book by its cover’ – reverse it. Do judge, because the artificial way on the main poster in which the group of ladies sit around a table with phony expressions of joy only paves the way to one of this decade’s most insufferable motion pictures. Its structure is basic, skipping from one scene to another subtly as possible and without any rise in dynamics or dramatic climax. Its script is basic and dry, lacking the sort of comedy which could potentially make the film very funny in places.
Its setting seems to be an upholstered paradise, each woman’s home being as chrome and silk-laden as the next from which they share their experiences (and flaunt their interior design skills). 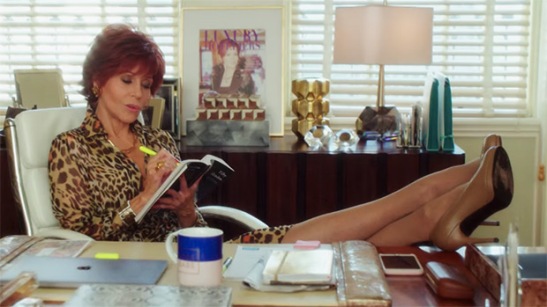 Book Club is like a knock-off Rolex watch; it’s shiny and sparkles like gold.. but underneath the pretty exterior it’s shabby and fake. Up there with the likes of The Big Wedding (2013), this poor excuse of a film brings nothing to the movie industry at all or consists of any elements that have much of an impact. Its flavourless story of desperation coated in sugary humour is mediocre at best, with the lead characters becoming embarrassingly needy rather than tackling their issues with an undercurrent of humour (be it dry or silly). Some films’ characters are likeable and funny, they deal with the story in ways relatable to those watching. Not this lot. These women deliver such a pitiful display that by the time the end credits roll you’ll probably wonder if the copy of Book Club you’d acquired had gotten mixed up with a promotional film advertising an over-50’s dating agency, complete with narrative of member experiences from first date to their first kiss in twenty years.
Just awful.

So were there any parts of this film worth sticking around for?

Whilst Book Club is a dull tale mixed with sexual discovery, its backstory of four lifelong friends who uphold a strong friendship is sweet. The film opens with (harshly edited) photographs of the young women who formed a bond many years ago, and never broke it. This heartwarming example of those connected meaningfully adds much-needed relief and stops Book Club from nosediving completely.

I am sure older viewers will have a great time watching this, it contains themes that they can relate to delivered by actors they are familiar with. I personally would never watch this film again. And god help those who come into contact with it the first time.

This entry was posted on October 2, 2018 by rickysfilmreviews.