A social satire in which a man realizes he would have a better life if he were to shrink himself to five inches tall, allowing him to live in wealth and splendour.

Ok, my first and most important observation of this movie: something is drastically missing.

Whilst exploring the theme of ‘fully grown human becomes smaller than a penis’ theme (when Damon’s character screams down the telephone that he is now “FIVE INCHES TALL!” a penis was all that I had spring to mind, the average tool supposedly being six inches and upwards), Downsizing misses the mark massively on the entertainment scale. Its story is easy enough to follow but lacks the action and adventure most people would anticipate the movie running on. Instead, it drifts off into total boredom with Paul coming into contact with a short-fused Asian woman who wants his assistance with her dying friend.

Like a shitty black hole, Downsizing implodes on itself and goes in the opposite direction to what it should. Its attempt at fantasy is a complete flop, mainly due to the fact the ‘shrunken human’ element disintegrates about half hour in to the feature. 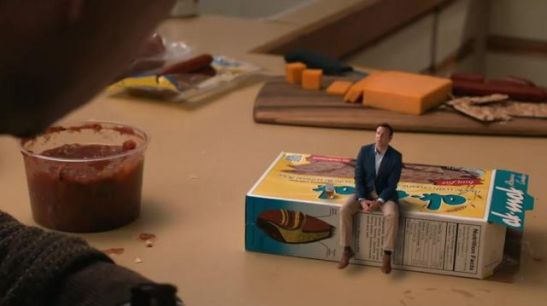 The fact all miniaturised people live in a land specifically designed for them takes away the tiny-person-meets-normal-person aspect. The movie focuses on how these newly sized people live in their apartments, meaning these apartments and gardens, etc. appear normal size like they usually would. There is very little / almost no distinction between normal humans and downsized humans. None of the two worlds colliding. No adventure involved like a small person becoming entangled in a dangerous scenario in a bigger person’s kitchen or something. No dangerous escapes from everyday items, or getting lost in a garden (to them a jungle) perhaps.. so in actual fact, Downsizing is simply a film about standard-size people because Leisureland isn’t looked at from a larger person’s perspective. The camera drops in on the characters going about their daily lives – with furniture and other home comforts being a size to match them.

There are one or two scenes at the beginning which do see downsized people mixing with big’uns, but otherwise the viewer is screwed if he or she is looking for an adventure.

I recently spotted this movie on DVD, sitting on the shelf at a local supermarket – and tutted. Sums it up. Downsizing is – ironically – a massive disappointment and seems to get swamped by its masses of cast and backing cast who are part of scenes which linger..

..and linger a bit more, until the lead character decides to move slowly on to something else. Downsizing missed the mark and could have been done so much better. I wouldn’t watch this again if you paid me.

This entry was posted on June 27, 2018 by rickysfilmreviews.