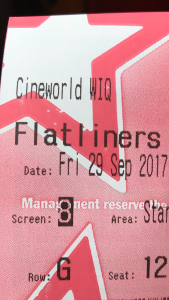 Five medical students, obsessed by what lies beyond the confines of life, embark on a daring experiment: by stopping their hearts for short periods, each triggers a near-death experience – giving them a firsthand account of the afterlife. 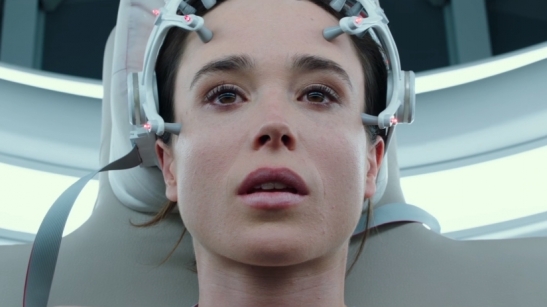 This movie scored a whopping 5% on Rotten Tomatoes. Says it all really.
There was absolutely no point in re-creating Flatliners, from a production point of view as well as story. Because guess what..

That’s right, Flatliners was one remake too far. We’re being smacked with all sorts aren’t we:

IT (there already is an IT)

Beauty and The Beast (remake)

Murder on The Orient Express (remake)

Jumanji: Welcome to the Jungle (why?)

Flatliners (god only knows why).

There have been a few more out there to continue a series of stories or to completely overhaul an original idea. And as we skid towards Flatliners, it’s getting too tedious. Hollywood is drying up at an incredible rate and in desperate attempts to keep the money rolling in, we have Universal, Columbia Pictures, Kinberg Genre, Walt Disney and many other companies all trying to cash in on the box office by throwing up their dinner from fifteen years ago and passing it off as this morning’s breakfast. 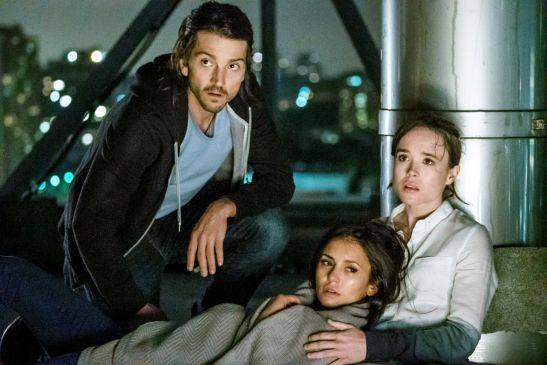 Not good. Decidedly not bloody good, and it’s most of us viewers who are paying the price when paying for a ticket with a, “hmm.. already seen it. Might as well see it again” attitude.

So, Flatliners. Flatter than Kim Kardashian’s personality – and here’s why:

The film moves at a good pace but in some places it’s too good to the point of dishing up the scares one after the other without any genuine plot / character development. Which is probably not required in a feature like this, but it still makes a dull watch: one person has their heart stopped – experiences the ‘afterlife’ – returns – few minutes of reaction – then the next person is up.

There is something truly unsympthetic about each character, I genuinely couldn’t give a crap about any of their histories or what was happening to them. The fact each one was played by an actor who looked as though he or she would rather be at home flicking through Instagram than be on set didn’t help either, and Flatliners was fast becoming a – well – flatline.

This is one of those movies which radiates a stale vibe; a movie you’ve seen or heard of before so you sit watching it knowing exactly where it’s headed – you’re just waiting for it to end..

Flatliners 2017 really is an awful recreation of the 80’s classic. Its scenes are abrupt, its plot already unfolded. If you’re a teenager sitting down to watch this and are wonderfully oblivious to the original movie then knock yourself out. Enjoy the story. However, if you’re twentys upwards and have seen the original – leave your eyes there. Avoid this version like the plague, it is just awful and almost embarrassing to the original concept.

..absolutely nothing. Flatliners is appalling.