A behind-the-scenes look at the life of author A.A. Milne and the creation of the Winnie the Pooh stories inspired by his son C.R. Milne.

Goodbye Christopher Robin was completely different to what I thought it would be. This biographical feature casts a dreamy net over the history of A.A. Milne and his child C.R. Milne. With misty sequences taking place in some sumptuous leafy acreage, the movie is a genuine pleasure to watch. And if you appreciate Winnie the Pooh and related stories, I am certain this will be right up your garden path. The movie digs deep into the history of Milne’s life at the same time as examining the creation of a number of his famous literary characters. This makes an interesting watch, especially during scenes where the  relationship between him and his son is fragile when the evolution of Pooh, Eeyore and Piglet is in full flow. This emotional undercurrent blended with the success of the man’s work means the movie splits into two directions and the viewer gets follow the protagonist’s success at the same time as witnessing progression of the often distant relationship between father and son. 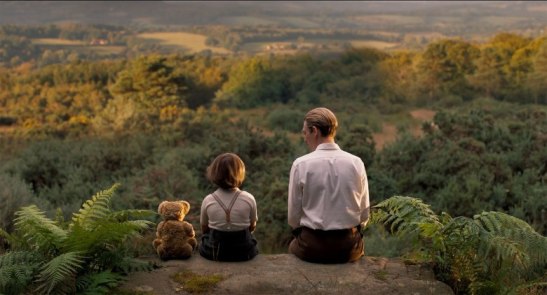 Gleeson slides into the role of 1920’s father brilliantly. He is fresh faced and plays a more sensitive role compared to other films he’s done recently. Some of his scenes are laced with a deep emotion as war-torn Alan Alexander tries to bond with his little boy. Cue gooey situations such as giving his son a bath; Christopher applies a bubble beard and the pair of them pretend to shave. What would usually be a playful moment to pass off swiftly actually strikes a chord, this small gesture between father and son radiates an air of happinness and sadness combined. It’s very sweet.

There is another scene where Alan takes little Christopher into the forest surrounding their home to play and come up with ideas for his next story. This is where the likes of Winnie and Piglet come in after he takes inspiration from his son’s stuffed animal toys. So amongst the pair’s bonding time the idea of Winnie the Pooh begins to form and take shape, with A.A. writing down his ideas as they come churning in and C.R. lends a hand by being his father’s inquisitive inspiration.

Goodbye Christopher Robin truly is a movie about channelling your pain into something good, where even the most distraught person can find the brilliant parts of their soul from the darkness they feel. This movie isn’t just a dreamy tale of the man who wrote Winnie the Pooh with book pages flapping about the place and squidgy yellow bears hopping around, it actually charts the personal journey of an ex-soldier involved in the Battle of the Somme and his psychological recovery of such tragic events. Alongside this is the emotional value of struggling to maintain family relationships. Milne’s literary works act as the undercoating for this narrative and glue both elements together perfectly. Praise to director Simon Curtis for capturing such raw feeling in an otherwise heartwarming story.

Robbie is fantastic in the movie as Milne’s wife, Daphne. Picture her running around with a baseball bat in Suicide Squad – and then watch this movie. You’ll be won over by the woman’s talent I’m sure. Sporting a rigid posture and incredibly posh British accent, Robbie almost steals the screen from Gleeson and little Tilston. Adding her to the cast of Goodbye Christopher Robin was a superb idea; she boosts the movie’s dynamic massively and I have a feeling that without such talent it would have been quite a dull production, especially if Daphne was played by a more soppy actress who is very bland to watch (A-HEM, Alicia Vikander for example). 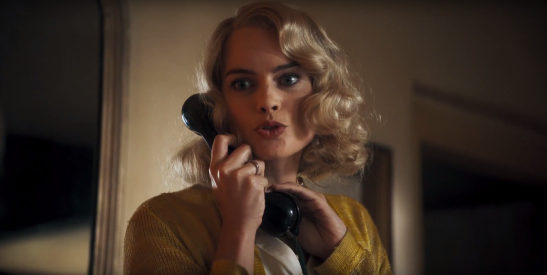 So what went wrong with Goodbye Christopher Robin?..

As mentioned above, fans of Winnie the Pooh will probably poo with glee. It contains everything the bear lovers could want. However if you’re not into the famous stories yourself, you will probably end up piss-bored by Gleeson’s constant miserable face and the old-fashioned setting. I have to say, if this movie didn’t progress at the pace it did I would have walked out. It is quite meek in parts, certainly not for viewers who like a lot of action.

Come, ye fans of literature and revel in this delightful tale of how one of the most famous books in the world was written. This movie has some gorgeous setting and scenery, along with a vibrant cast. Goodbye Christopher Robin isn’t bad at all, but as mentioned above steer well clear if you’re wanting something pumping with excitement.

This entry was posted on December 14, 2017 by rickysfilmreviews.