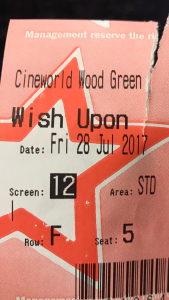 A teenage girl discovers a box that carries magic powers and a deadly price for using them.

Character reactions to deaths are just shocking. As in – there is no shock.
Have you ever seen a film whereby one – or a few – of the characters meets their end in a seriously gruesome fashion, but the reactions of other characters are very tame? Almost void of feeling? Like someone getting their head sliced in half, but the terrified witness hardly utters a scream.
You would expect them to at least gasp.
Cry.
Something.
I hate those types of films.

When someone linked to Clare gets caught up in a nasty accident involving a chainsaw, the girl trots away from the scene with all the anguish of a girl whose hamster was just found dead in its cage. I.E. sad, but you can always purchase another one. King’s acting is absolutely appalling during this scene. And it doesn’t help her two co-‘stars’ are just as shabby. I’m not the world’s finest stage performer myself but for fuck sake, watching these girls squish their way around the movie set was like sitting in front of Disney Horror – if Disney had such a channel. Poor performances all round.

That said, I cannot deny that there are a few moments which involve a bit of dramatics. It’s not all bad acting, fortunately.

The title. Let’s face it, a movie named Wish Upon is destined to be a total flop isn’t it. Just saying the name out loud makes me cringe slightly due to its abrupt, tacky wording. It sounds like a load of hormone-splattered bollocks doesn’t it. And I’ve seen titles like it before:

My Soul To Take.

That’s right, guys. You can tell what you’re in for just by the title.

Something was drastically missing plot-wise in Wish Upon. Scenes involving Clare’s wishes coming true seemed to play out like brief how-to‘s whereby the oblivious teen clutches the music box, wishes, waits, and then the subsequent scene reveals what happens.. this is one of those movies where the viewer is given very little to play with and runs almost like a kids TV show:

Character enjoys his / herself briefly.

There is a massive gaping hole in this movie’s substance as it hops along like the checklist of a gluttonous teenager. Something about Clare was really irritating. Squishy bird-like features are one thing, but the actress did nothing to add value to her character and came across just plain annoying (especially the pretentious scene where her character became ‘popular’). Imagine Mel Gibson’s on-screen daughter in What Women Want – only less energetic. Added to this was blubbering best friend June (Purser) who I refuse to even describe. Terrible. 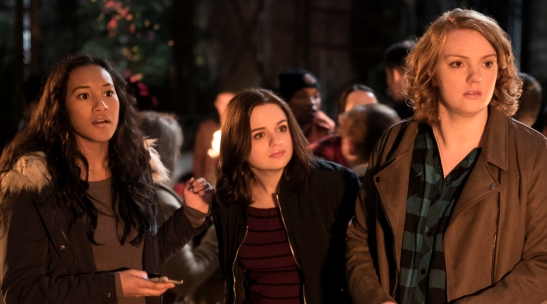 Wish Upon is beyond tacky. Tacky to the point of being strangely enjoyable, a guilty pleasure. This is a movie to put on and chill out on the sofa with. One of those where you’re texting away to a friend – suddenly notice something happened on screen – pop your phone down – pick up the remote – and rewind back to catch whatever it was. Absorb. React. Pick up your phone again and refresh Whatsapp, fully aware of what’s going on in the film (even though you’re half-watching) because of how thin a plot it is. This is a film that lacks so highly in viewer engagement it doesn’t require much attention. Perfect for an airplane journey I reckon. And its leafy, autumnal set gives it a softer atmosphere too.

The title says it all.

Steer clear of this one if you’re wanting an enjoyable, juicy horror film – Wish Upon simply doesn’t provide the goods. Sadly, what has the potential to be a freaky little gem is completely ruined by its immature, almost light-hearted approach at entertainment.
This movie is ideal for young teenagers – not just because most of the cast are – but because it isn’t as gruesome a horror as most. It’s a subtle piece of cinema those coming of age would enjoy, but if you’re a die-hard fan of the horror genre you’ll be sorely disappointed. Give Wish Upon a go if you are absolutely piss-bored one night and it’ll fill a gap. But for the love of god don’t go all out to see it.

This entry was posted on September 26, 2017 by rickysfilmreviews.