An American widow finds unexpected love with a man living wild on Hampstead Heath when they take on the developers who want to destroy his home.

I had to go see Hampstead. Had to. I saw the poster for it on the London Underground and was repelled instantly with a, “what a load of shit” reaction. But Hampstead is extremely familiar to me, being two tube stops from where I currently work in Brent Cross, North London. So I had to give it a pop, see if it used actual Hampstead as it is in real life and surrounding areas. Also to see if I would be nicely surprised given the casting.

Ok so it wasn’t unbearable, but Hampstead certainly wasn’t the most kicking of movies I’ve gone to see at the cinema.

I’d say shit but watchable. Hampstead is like visiting the library to rent a copy of Dan Brown’s Angels and Demons – but when you get there they only have Inception Point in stock. That classic “meh” feeling that you wanted something else, but at least you came away with something at all. Random example, but you get the idea: it’s a movie and it delivers. It just doesn’t have the desired effect.

I’m not sure where I stand with this one. It makes a quaint little production focusing on the story of a homeless man and a not so homeless woman in modern day London, but this story isn’t overly engaging. In fact, it was as though something had been torn from the script a few days before filming began, a sub-plot, which if left in might have given Hampstead the kick it was missing. But literally – all you get is a bored woman becoming even more bored to the point of studying the homeless man opposite her house.

Who then confronts him.
Befriends him.
They strike up a relationship.

And of course the cliché ingredients of a production like this are included:

The lead male character is tough on the outside – soft as shit on the inside; spends all his time being miserable and declines the lead female’s advances. Suddenly becomes a different person less than twenty minutes later when she has pulled a totally different man from his soul.

Disgust and contempt from the woman’s local friends. The classic invisible fence scenario where she is sat firmly on it whilst  balancing him and them.

In any other circumstances, she wouldn’t look twice at the vagrant. But in these circumstances he’s the best thing she’s ever laid eyes on, ever.

Brendan Gleeson gets on my tits.
There is something about the man I find irritating; his slouchy posture and same-old gruff voice.. I don’t think I’ve ever seen a film where he isn’t Irish. He seems to utilise the same “skills” as his previous movie each time, and the movie before that, it’s not good it really isn’t. He seems to waddle on to the screen, deliver a moody old bastard you would liken to one of your old teachers at primary school, and then buggers off again. The only movie I found him quite entertaining in was Harry Potter and the Goblet of Fire (as Alastor “Mad-Eye” Moody).

Hampstead is exactly the sort of production you’d catch mid-afternoon on television was enjoying a cup of tea and browsing the back sections of the Evening Standard (seems to be a lot of these lately). It’s subtle, soft, but doesn’t pack much of a punch. Its story consists of characters sat in quaint coffee shops or stood around big houses conversing about their daily lives. This is one of ‘those’; it delivers a story but it won’t leave you intrigued or reeling for more. It’s basically a fat-free Notting Hill, and like most twenty-something’s would enjoy features such as Friends with Benefits I think Hampstead will appeal to most over-fifty’s. It’s more their kind of thing. 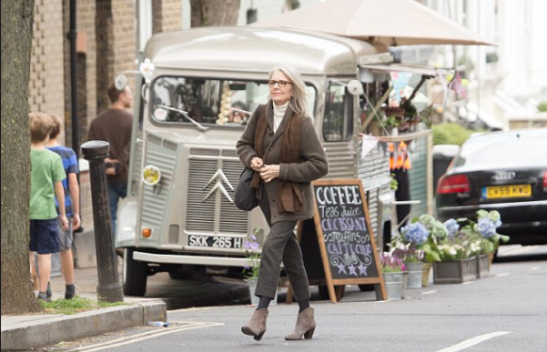 This is certainly a different stroke for Keaton, whose character spends most of her time being a piss-bored lady of leisure. Seeing the actress in a different environment like North London was interesting though. This gave the film a nice touch, despite being a load of old bollocks.

Don’t spend money to see Hampstead. Although it contains one or two endearing moments and paints Keaton a different colour, it’s no more exciting than watching the Queen’s Speech on Christmas day – I.E. not very exciting.

This entry was posted on August 27, 2017 by rickysfilmreviews.