Pirates of the Caribbean: Dead Men Tell No Tales

Captain Jack Sparrow searches for the trident of Poseidon while being pursued by an undead sea captain and his crew.

Halfway Across my Timeline

A particular person stood out for me during this movie. The second he popped up and spoke in his husky tone, I immediately recognised him – and he’s not even overly popular. The man is not an A-lister. B-lister. Or C-lister. He’s probably more an E-lister.

Many years ago during the school summer holiday’s of 1995, I was a huge fan of a kids TV programme called Halfway Across The Galaxy and Turn Left.
I remember switching on to watch it every morning, I bloody loved it. And Spence played the role of The Chief. A terrifying, towering, pale-faced enemy of the lead character. Freaky chap he was.
The actor has since been in various productions over the years, but none that I have seen. And here he is again. Twenty-two years later, halfway across my timeline and plopped on screen amongst the cast of Pirates of the Caribbean: Dead Men Tell No Tales. So strange, seeing him after so many years. And the scene he was part of proved highly eventful..

Back to the movie, and the opening scene which reintroduces Captain Jack Sparrow is very good. Even though I’m not a fan of the Pirates franchise, I was entertained nicely with speedy action and a touch of dry comedy. This scene sees Sparrow make his first appearance by bursting out of a vault covered in booty (both jewellery and female), to the horror of townspeople. As the scenario unfolds, the action speeds up and Depp keeps it going nicely with unwvering energy. Cue much running, jumping, sliding and being dragged along the ground dangerously by a moving vehicle – whilst dressed as a pirate. God only knows how his costume stays on throughout this swashbuckling scene, but it’s a treat for fans. 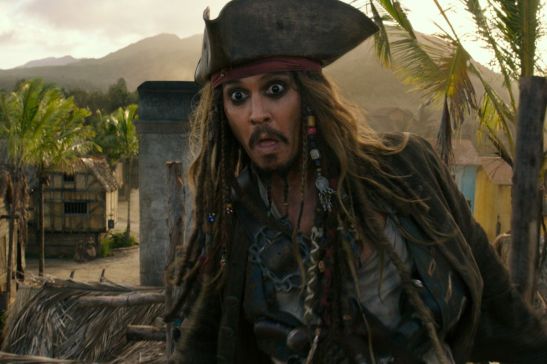 For much younger viewers this movie might be a bit too much to absorb as it (a-hem) barrells full steam ahead towards its under-sea conclusion, but at the same time it’s good in scene structure with the main action moving at a swift pace. There’s a lot of drunken babbling from Depp too – a trait which adds comedy flair to his lead role and has a nice authenticity about it. Hats off to him, the man can ‘do’ drunk.

I have to say, the CGI used in this movie is nothing short of brilliant. When it came to Armando Salazar I was impressed by the visuals surrounding his bodily features. More noteably his head. Sounds weird, but from the point of view of a person sat in a dark auditorium looking up at a gigantic screen displaying Bardem’s character, I found the special effects stunning.
Rich blues, greens and tinges of purple all blend together to emphasise his ghostly face and create a visually captivating lead role. Good stuff. You can tell it’s a Walt Disney Pictures production with all the sparkling accessories and vibrant animation.

And Salazar’s hair is wonderfully bizarre. He is given a ‘floaty’ look as his long locks waft around his head in slow motion. Imagine seaweed shifting about underwater. Same sort of effect and it’s quite a special part of the movie’s visuals, bringing the enemy to life in almost 3D style. Excellent.

So what got lost at sea?
What parts of this movie were so shit they made it almost unbearable to sit through?..

I can’t fault many elements of Pirates of The Caribbean: Dead Men Tell No Tales. For what it is this movie does its job and delivers its story, but if I had to pick something as a negative it would probably be how ‘busy’ it is at times. And the holes in the story.

When I say ‘busy’ I refer to a shitload of things happening on screen at once – in every element: number of characters, large set / surroundings, costumes, visuals.. the main elements. A scene towards the end of the movie is just like this; when Sparrow delves into the ocean floor to retrieve Triton’s pitchfork everything goes a bit mad. And it becomes such a bundle of sparkly nonsense that you’re best off just kicking back for a few minutes and letting it go over your head. Being the fifth instalment in the ‘Pirates series, perhaps it was the director’s way of popping the cork and spraying the audience in celebration with a combination of all films in the series. But to be honest, it ends up being your standard Disney tripe.

In addition, the story lacks something. The script flows, but the structure of character relationships and events taking place seems slightly shabby. Thank god for the special effects because dead men really do tell no tales.

Oh, and the way they portrayed young Jack Sparrow.. brilliant. I couldn’t tell if it was old footage, makeup, or a lookalike.

Rainy, grey day outside? Nothing going on? Curled up on the sofa inside, browsing the internet for something to watch? – this is your perfect selection. Pirates of The Caribbean: Dead Men Tell No Tales is fit for an empty afternoon when you need some entertainment. But don’t assume you’re in for a treat – this movie lacks the juice it needs to make it great. It’s not overly hideous, but it certainly doesn’t make much of a mark.
Let it drown.

This entry was posted on July 29, 2017 by rickysfilmreviews.