Manchester by the Sea

An uncle is asked to take care of his teenage nephew after the boy’s father dies.

Manchester by the Sea isn’t a bad movie. It’s not overly thrilling either though.
It is constructed well and uses a talented cast ensemble to bring the heartbreaking story effectively to life. It’s certainly not the most uplifting of productions, but at the same time carries a genuine air of raw honesty as its plot unfolds around emotionally-charged characters.
Affleck does a great job portraying drained handyman Lee. He’s no Oscar winner, but he certainly ensures scenes of absolute emotional torture and pain.
Manchester by the Sea is gritty in places, laying bare themes of death and destruction as well as heartbreak and near-suicide. DO NOT expect a witty watch, this movie doesn’t even involve dark comedy – it is pure pain from beginning to end.
Sadly, the feeling of being sat watching it was almost pure pain too; this is one of those features that runs like a soap opera. Shifting at moderate pace from scene to scene with one main character exiting as one enters, etc. Yes, it gets its message across but the shift in scene dynamics is dull.
And as for Williams – the ‘star’ of the show – the performer many people have been raving about as one of the lead roles – was she even there during filming?..

When I mentioned Manchester by the Sea to my sister a few weeks ago, even her first comment was about Michelle Williams being in it. And prior to this, I myself had heard a bit about it being one of her greatest movies to date.

..she appears for less than twenty minutes. 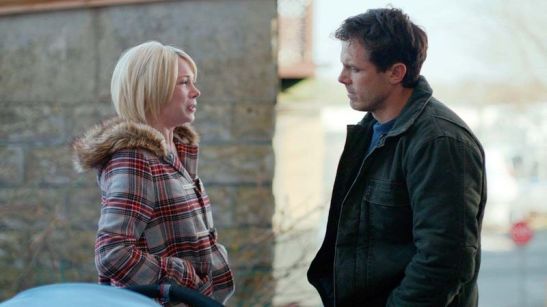 Ok, twenty four minutes – max. But still for an incredibly short amount of time.
Randi pops up mainly in Lee’s memories and then once or twice in person, but other than this the actress is barely part of the main action. Her screen time is way shorter than I thought it would be, leaving Affleck and Hedges to take over and carry the remaining 92% of the movie. Williams utilises her 8% well, but I wondered why she got the rave reviews when she was clearly – an invisible talent.

Manchester by the Sea is a gruelling account of one man’s struggle to accept and acknowledge particular events in his life. And it’s rough in places. But blended with this is a touch of light comedy (mainly involving Hedges as Patrick – entertaining chap), which literally only happens once or twice throughout. The audience in the cinema laughed out loud about two times during Manchester by the Sea; the rest of it is deadly serious stuff.