A titan of industry is sent to prison after she’s caught insider trading. When she emerges ready to rebrand herself as America’s latest sweetheart, not everyone she screwed over is so quick to forgive and forget. 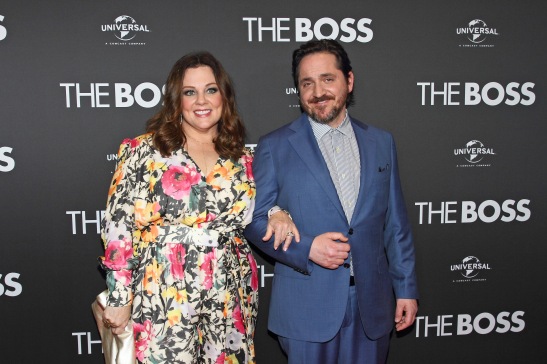 What a terrible movie!
Honestly. What an unenjoyable, tedious façade. I remember seeing the trailer at the cinema a while back for The Boss, and just how that trailer was constructed set Melarm bells ringing (no that wasn’t a typo – I actually mean ‘Melissa alarm bells’), because with Melissa McCarthy the movie she is the lead character of can go one way, or the other.

The Boss went the other.

I have mentioned this in previous reviews starring the brilliant comedienne; a movie she fronts can be bloody fantastic (Spy, The Heat) or nose-dive massively and become tedious (Identity Thief, The Boss). And I’ve learned with her that it all comes down purely to how the movie is directed. It must be. Because McCarthy’s humour remains the same bolshy and sarcastic sweary one-liner’s, and yet every movie she’s in is completely different from the previous or next – in a very good or very bad way.

It’s literally a case of being herself, or playing a character:

When Melissa is herself – a decent stand-up comedy performer – she delivers the gold.
When Melissa adopts a specific character – flamboyant costume, bizarre hairstyle, full of attitude, etc. she falls flat on her arse – big time.

Something about how she is directed in particular movies makes her less funny than others; I therefore conclude it matters how McCarthy is DIRECTED. It is down to this element of movie-making which sends her in the direction of failure or success.

I’m fed up of explaining this in most of my reviews, so I’m leaving that subject here. I’ll move on to exactly why The Boss was shocking..

The ‘single mother’ is a tired concept in Hollywood I reckon, and The Boss also throws this theme into its story – but it doesn’t help that Claire (Bell) is one of the most ineffective characters I have ever seen in a film. Bland in appearance as well as personality, the actress spends her time on screen literally carrying out her role instead of acting it. There is such a lack of effort performance-wise it was as though director Ben Falcone had shoved his theatrically inexperienced wife on set at last minute because the actress supposed to play Claire dropped out. Making this worse was the fact single mother Claire had a few funny lines – which just weren’t funny because the actress had a horrible lack of comedic timing. Kristen Bell was just not funny enough, bringing more of a dramatic approach to the script in reverse.

The supporting cast: none of the men or women on screen seemed to be ‘with it’. Glazed eyes and unenthused facial expressions ensured they evaporated into the background fantastically. An example being Claire and a macho security guard in the opening scene. The pair seem to stand there, lifeless, forcing McCarthy into taking charge of the scene. It was beyond bland, with the comedienne delivering moments (even when she wasn’t being overly funny) which came across as hilarious because the other two were as effective as a mannequin from River Island’s shopfront window. 70% of the actors in this movie watered the movie down due to having such little impact. 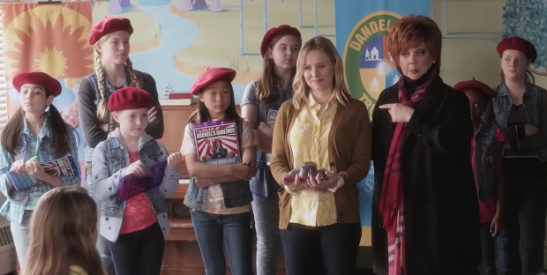 Ever seen a movie with a story that lacks so much action it may as well be a radio show instead of being on screen? Welcome to The Boss. This movie literally just – happens. Scene one blends into scene two, blends into scene three, into scene four. There are no big plot twists or major happenings to split the dynamics up or build tension, this movie seems to just ‘get by’. What we have here is McCarthy and Bell wandering around set, chatting. I would love to say there was more to it, but there honestly – is not. 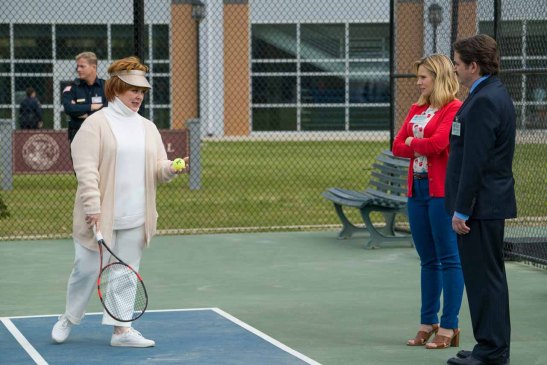 I can imagine looking in the dictionary for the word ‘implausible’, and seeing:
Synonyms: improbable, unlikely, The Boss, dubious…

Believe me, none of these synonyms come close to how far-fetched The Boss is. A prime example is Claire – a struggling single mother – walking out of her job, because she doesn’t like it.
Yes that’s right – she’s bored with what she does so she gets up and walks out. Even though she has an apartment. And a young daughter. This scene was so unbelievable, that I hardly even absorbed any of it. Although I had probably glazed over within the first few minutes of the movie, I honestly didn’t acknowledge any part of Claire’s walk-out because of how bloody ridiculous it was.

The Boss (amazingly) isn’t completely dire. It contains a handful of funny moments. Michelle having her teeth done by way of a bizarre tool which almost pulls her entire face back. Her army of girl guides beating the shit out of another army of girl guides, etc. There are just enough moments of comedy saviour which stop this movie from nose-diving into Hollywood Hell, luckily.

McCarthy is – as always – talented. Direction aside, the woman is very good at switching on and off the dramatics. The Boss is no exception and sees her go from clownish to crying when needed. This movie needed skill like hers, and it shows. 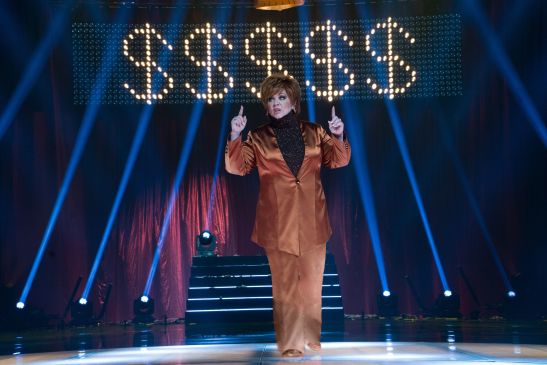 The Boss is incredibly average. Lacking highly in decent structure and plot, I’m not surprised it scored a whopping 19% on Rotten Tomatoes. This movie is like your favourite chocolate bar – with all the sugar removed. It is bland, boring, and does nothing for McCarthy’s career either.
This is not worth time or money being spent on. However, if you’re looking for something to stick on in the background whilst a Tinder date pops over for a ‘hot foamy one’ (coffee), it’s ideal. Let it run in the background. Because it certainly fades into the background.

One of Melissa McCarthy’s worst.

This entry was posted on July 3, 2016 by rickysfilmreviews.