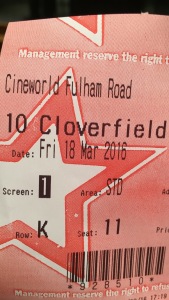 After getting in a car accident, a woman is held in a shelter with two men, who claim the outside world is affected by a widespread chemical attack.

Because 10 Cloverfield Lane is absolutely nothing to do with Cloverfield (2008). I can only assume (and confirm) that producers J.J. Abrams and Lindsey Weber simply fed off the title of the previous movie in order to make this movie sound intriguing, excite potential viewers, get audiences into cinemas. I’m certain I wasn’t the only viewer out there who was interested in seeing this movie due to the success of Cloverfield those eight years ago. And the whole mystery surrounding it was intense – J.J. Abrams did a great job at keeping the details secret, no part of the plot was given away other than the vague trailer. I must say I felt a flicker of excitement when I first saw the poster in the cinema; I bloody loved Cloverfield – the fact there was a sequel?.. wow. A must-see…

I wish I’d never gone to see it.
This entire movie is set underground in a bunker with three actors. Their characters eat, read books, sleep, shower, play board games, watch DVD’s. It’s like a recreational Big Brother where the housemates are filmed taking part in activities you’d see being played by the residents of an elderly person’s care home; each one voted out if they lose at a jigsaw puzzle or something. At first, I sat there and accepted the plot for all its claustrophobic strangeness. Michelle desperately trying to hatch an escape plan whilst Emmett wanders around talking complete crap about the things he never got but always wanted.. it really is dull, made even more dull by captor Howard and his constant post-apocalyptic ramblings involving technical and scientific explanations as to surviving the ‘attack’. 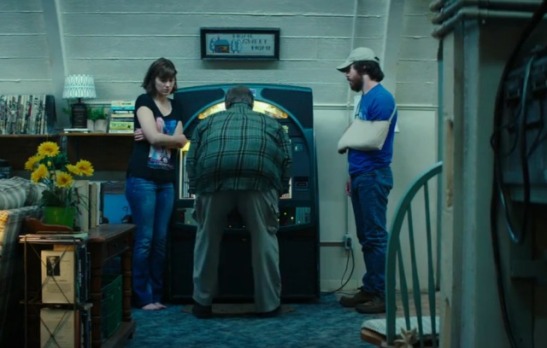 The plot is simple:
Michelle has woken in an underground bunker after a serious accident in her car. A strange man named Howard rescued her and brought her to his house so she could recover. When confronted, he explains an ‘attack’ has taken place on the country and that the air is contaminated – anyone who goes outside will start to melt as the effect of it. Michelle accepts his explanation but is dubious and insists on hatching some sort of escape plan, where she can get away from Howard and back in to civilisation.

– Michelle’s environment was fine (the air, civilisation, etc.) up until her car crash

– she is held almost captive in a man’s basement

The entire plot overlaps itself here, with Michelle being rescued from her accident but also the apparent attack on USA. The time it took for the end of civilisation to begin and Howard rescuing her must have been instant, and the way in which the stories intertwined felt weird. When exactly did the attack happen? Weird how she crashes her car in normal circumstances before everything suddenly turns – like a blackout in the plot which rolls over to the story of captivity.

10 Cloverfield Lane reminded me of a movie I saw quite a while ago. 2012’s Storage 24. Mainly because of how the plot turns out in the end.
After nearly 98 minutes of total disappointment at the lack of the monster or any related story from the first movie, this movie ends with Michelle escaping and discovering that there is in fact, some sort of alien attack.
But it’s not ‘it’ from Cloverfield. It’s something else. And no sooner does she come into contact with ‘them’ than the movie ends. Like Storage 24, the characters are sectioned off from the outside world unaware of the world going to shit. Then a character escapes, goes outside. And in the final few minutes of the movie the threat is revealed, giving viewers a quick glimpse of who or what has attacked the earth. And then the credits roll.
That’s what you get here with 10 Cloverfield Lane. Absolutely nothing, until the final few moments when producers throw an extraterrestrial or two at the viewers – in just enough screen time for them to wonder what is going on – before fading out and leaving them guessing..

I was raging.
Is there even a term or phrase to use when a producer feeds off the idea of a different movie in order to entice audiences in – but it has absolutely nothing to do with it?
I’m sure extreme fans of Cloverfield will try and find reasoning to make themselves feel better; I.E. the atmosphere being contaminated is due to ‘it’ from the first movie farting and releasing a poison gas. Or ‘it’ from the first movie falling out of one of the spacecrafts from the second movie and being marooned on Earth (hence wandering around Manhattan).
Even I can’t think of a reason because the plot of 10 Cloverfield Lane had such little to do with Cloverfield. They are not linked in any way, and I left the cinema beyond disappointed.
And whilst I’m in the spoiler section of this review – how exactly does a lit rag shoved in a wine bottle singularly destroy and crash an alien aircraft?
I was baffled about this, the ending is just ridiculous. 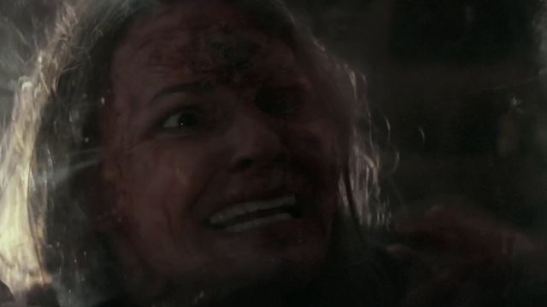 I spoke to my work colleague Tom about this movie who informed me another work colleague (Michael) had gone to see it; and he told Tom what a load of shit he thought it was also.
I’m glad my opinion can be backed up.

I wouldn’t be reviewing film if I didn’t give the negatives and positives.

The positive element of 10 Cloverfield Lane is the anticipation it creates. The atmosphere one person in the know, two people clueless creates. The entire movie is centered around the ‘attack’; something having happened above, but no one below knowing what, so stirs an air of suspense. You may wonder if Michelle will ever get out, and if she does – what exactly is it up there? This was the only element of 10 Cloverfield Lane I relished, the main reason I didn’t walk out before it ended. I wanted to see what she would actually find..
So on that scale, this movie excels. 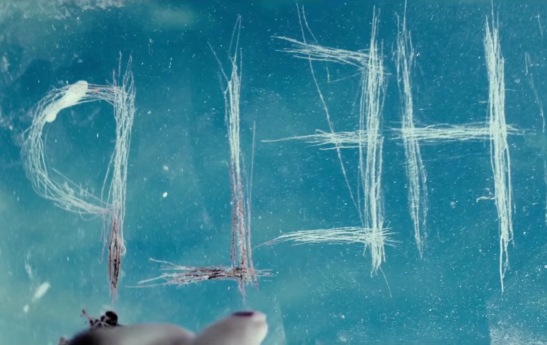 ..but I’m still not happy with it.
And if you’re a huge fan of Cloverfield from 2008, I would strongly advise you to steer clear of this. Because if it’s incredibly sinister monster action, survival situations or non-stop panic you think you’ll be getting, think again. Yes, I’m aware the lead male character is ‘a monster’ which lends a symbolic element to the fact the threat is a monster in a different form and doesn’t need to have scaly skin and a monstrous tongue, but for fuck sake..

I don’t think I’ve seen a worse sequel.
Ever.

This entry was posted on April 5, 2016 by rickysfilmreviews.