An American nanny is shocked that her new English family’s boy is actually a life-sized doll. After she violates a list of strict rules, disturbing events make her believe that the doll is really alive. 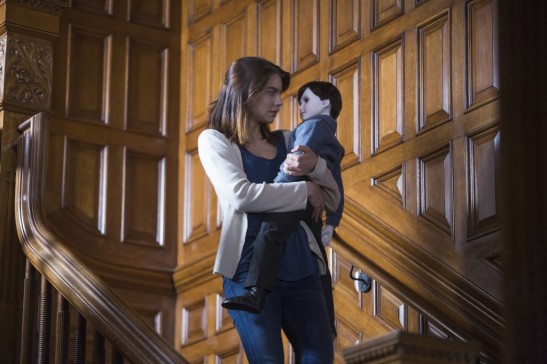 The Boy is bloody weird. Cheap. And very tacky. It’s the type of movie you’d expect to hold no substance whatsoever – and end up being proved correct. But albeit a cheap thrill, the movie delivers tension where needed. In a sense, The Boy is quite old-fashioned. It is very simplistic in production, using a grand old mansion in the middle of nowhere as the main and only setting. Long dark hallways, creaking floorboards, objects being moved around, thunder storms late at night.. all the classic elements which lend nicely to a story set in a spooky house come into play. And it works well.

Without straying from its filming location at all, it’s minimal and uses very little cast but it’s effective. The plot is simple and very easy to follow with some darkly sinister action thrown in for good measure – involving a milky skinned doll (Brahms) who whisks up a creepy atmosphere without having to do anything at all. Just by sitting on a chair staring into space the doll adds a weird feel to the movie; I personally didn’t find him the scariest thing I’ve seen in a horror flick, but there was something about his milky chops which made me shiver slightly. 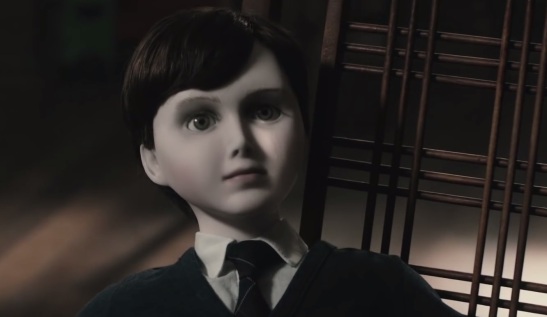 I think where The Boy excels is the suspense surrounding Brahms. I never quite knew when – or if – the doll would spring to life and scare the shit out of his babysitter. For example, the scene where Greta sits at the kitchen table opposite him and stares into his eyes. The scene is completely silent at one point as she does nothing but look at him.
He stares back.
She shifts in her chair slightly.
He continues staring at her.
And then she gets up, leans down over him and shouts, “BOO!”. 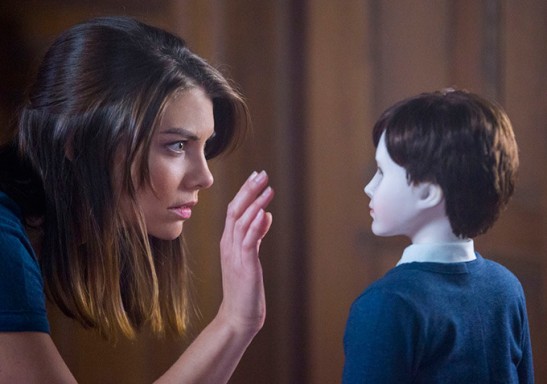 This scene was bizarre but fuelled with a subtle tension. I mean, I wasn’t gripping the arms of my seat and gasping loudly as with some other movies. But I was sat wincing slightly with my head cocked to one side.. waiting. I was loving the anticipation it created. I had no idea if Brahms would pull a ‘Chucky’ (Child’sPlay, 1988) and burst into life, swearing and spitting nasty expletives at Greta or not. And her “BOO!” moment made me quiver as I wondered if he would then pop up and “boo” her back. And that’s what you need in a movie; moments that make the viewer watch. Wonder. Nothing has to happen, but taking hold of a viewer’s attention as they question if something will develop is a good element to have. Subtle tension here, good stuff.

And yes, The Boy is tacky, but an enjoyable tacky. I actually found its old-fashioned structure refreshing. We seem to be getting hit with more and more vampires lately. Zombies. Masked killers, people taking betrayal one step further, entities crossing from parallel worlds to stalk people, even Facebook seems to be a launchpad for the paranormal these days (Unfriended 2015, Friend Request 2016), it’s ridiculous.
So this is probably the reason why I found The Boy refreshing. It’s a simple story which combines drama and horror, and throws in a creepy doll to lead the way; the second protagonist. Most movies introduce the enemy / monster by having the character appear and cause havoc pretty much immediately. 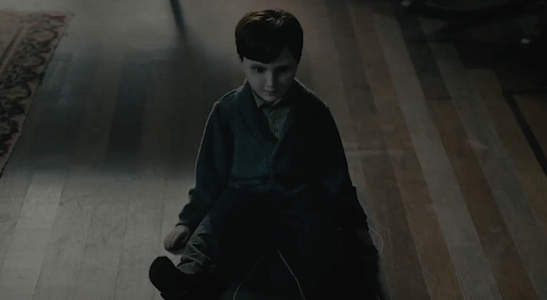 The Boy sits Brahms on a chair and leaves him there, staring into space. Things start happening, but all the while the little doll is just sitting there. Unmoving. It’s slightly unnerving, especially during moments where Greta’s face is up close next to his – her staring into his eyes.. he could do anything at any moment. Of course if it is actually Brahms who is responsible for the strange events taking place..

There were one or two moments I found strange during The Boy. I should mention that near the end of the movie, the real Brahms – a fully grown unstable adult – makes an appearance and pursues Greta and Malcolm as they try desperately to escape the house. It turns out he did not die like everyone was told, and has been kept in the attic by his parents. So I found it bizarre how when Greta got late-night visits and phone calls from Brahms, the voice of a young boy was heard.
One example is when she shuts herself in her bedroom as footsteps are approaching; a shadow of a small figure and a pair of shoes (Brahms) can be seen under the door. Then Brahms calls out to her in his sweet eight-year-old voice. He continues talking to her with brief, short sentences before disappearing.
Yes – the voice of a little boy.
It is exposed in the end that the adult Brahms is responsible for moving the doll around the house, but if he’s a grown man holding the doll outside her door, how does he manage to speak in a child’s voice? Strange. 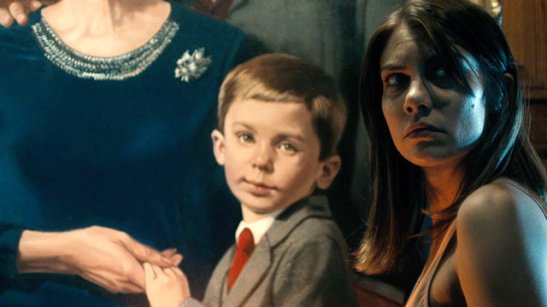 I didn’t mind The Boy at all. But I can imagine thousands of viewers out there will watch it and be very disappointed, because it’s slow and dull for about 70% screen time. The positives are the suspense it creates, the old-fashioned structure and the strange-looking doll himself. The negatives are slow-moving scenes and lack of exciting action. The Boy is also cliché in parts; Greta getting locked in the attic and delivering lines such as, “..Malcom, if this is you it’s not funny” – a line spoken by hundreds of other movie characters before her – is an example. And, “look, if somebody’s up there…” – another unfinished cliché horror movie line.

I personally would have liked to see Lin Shaye play the role of Mummy (Mrs. Heelshire). Lin is wacky and fits into messed up horror movies perfectly. And as this character, she certainly would’ve added a boost.
The Boy reminded me a bit of The Pact (2012). Proper tacky but very watchable, easy story but slightly disappointing. It’s a guilty pleasure. One of those movies you find on the cheap in a bargain bin, and don’t mind spending very little on.
It’s good.
It’s bad.
It is what it is.