A frontiersman on a fur trading expedition in the 1820s fights for survival after being mauled by a bear and left for dead by members of his own hunting team. 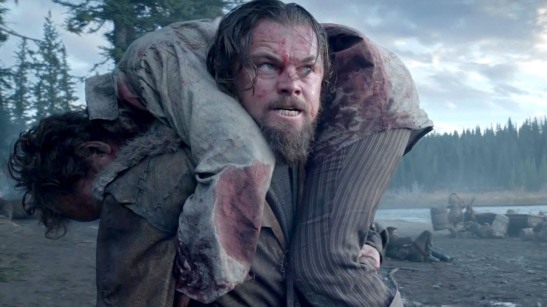 I think what I liked most about The Revenant was how sharp it was. Every scene contained great performances from its lead cast and some beautiful scenery. The clarity of graphics was flawless; be it lush green forest or endless snowy plains. And with this was up-close, grisly action mainly involving the slaughter of both wild animals and humans.
If you’re a vegetarian viewer I would strongly advise to avoid this movie as it contains scenes even I found unnerving – and I’ve sat through all three Hostel movies without feeling queasy at all. At one point, I actually felt my stomach heave as I watched Hugh slice open a horse and remove its (extremely) large organs. Slops of the animal’s interiors are on full show as he hollows it out to sleep in for the night. It really wasn’t nice at all. Fascinating I suppose, but not nice. Other bloody delights include man being impaled through his throat by a large arrow (which is very graphic), asphyxiation, stabbing and one of the characters being completely ruined by a wild bear.

If I’m honest, I sat watching The Revenant with a frown and open mouth for a good 60% screen time. Not in a bad way. I just couldn’t work out if all the the violence and pure aggression was unnecessary or not; this seemed to be a total gore-fest of a show – just because the director could.
The visuals overall were brilliant, no complaints here as deep dark colours added nicely to an often misty white backdrop. Rich purples and blues blended with bright white snow to offer gorgeous scenery, which at times seemed quite soothing. An almost Arctic atmosphere. I liked this. 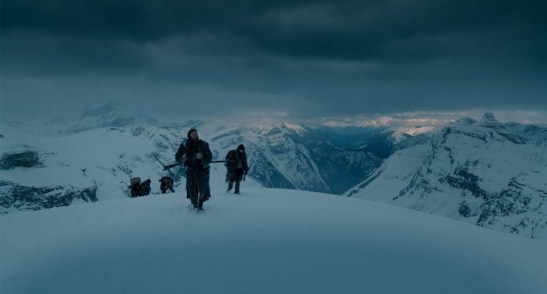 I discussed The Revenant with a work colleague recently, and her first comment was, “a friend of mine said it hasn’t got an actual storyline”. Which I have to say is just about accurate. This movie may be centred around a man who gets “buried alive” (I use inverted commas because he doesn’t actually get fully buried. Earth is thrown over him but only covers his legs – not as gripping as I’d hoped), but take him out of his shallow grave and the only remaining plot is him crossing baron lands on his way back home to get revenge on the man who left him for dead.

After resurfacing, DiCaprio spends the rest of the entire movie walking, running and swimming across Louisiana and neighbouring states, occasionally having a run-in with a bunch of nasty bastard indians. But that is literally it; a single man trekking cross-country to return home with a bit of bad weather thrown in to ensure icy conditions give the character something to do whilst on his journey. Believe me without the shit the weather gods cook up on Hugh’s journey, this entire movie would be about a man – walking. For a very long time.

The movie does save itself by shifting scenes between the Louisiana woods and the men back home at Fort Kiowa – this keeps it churning nicely, giving viewers a much needed break from branches, rivers and other leafy elements of the outdoors.

The Revenant reminded me slightly of the movie 300. A blasé feature which focuses purely on the aggression and violence of men at war with each other. Like 300, The Revenant leaves nothing to the imagination with up-close detail of bloody injuries and the portrayal of men at battle. Remove the animation-style graphics from 300 and you get The Revenant (especially the moment when Hugh slides off a mountain edge on horseback).

Oh, and not to split hairs but why the hell there was one singular English man – complete with heavy cockney accent – amongst a bunch of entirely American men was beyond me. It certainly sounded like one of those ‘randomly thrown in’ moments when he first opened his mouth.

Not Hard for Hardy

..sounds dodgy. And incorrect (I’m always hard for Hardy).
In all seriousness, actor Tom Hardy delivers an impeccable performance as Fitzgerald. He’s raggy, dirty, nasty, and very southern American. He certainly puts his acting skills to good use and brings a character to life with such dynamic, that it’s completely different to any other he has played in other movies. Of course other characters have to be different – my point is Hardy makes a serious effort. He doesn’t have to try hard at all, and is capable of playing a totally convincing role every movie.
And The Revenant is an example of this. The talented actor’s performance is absolutely faultless.

Not a bad movie, but I don’t think I could sit through The Revenant again. There’s only so many times I could absorb a man being thrown around by a bear, watching him foam at the mouth and his eyes turn white as a result.
This is the kind of feature that you watch once and really don’t need to see again; once you know what happens in the story there’s no point revisiting it.
Let it go.

This entry was posted on January 26, 2016 by rickysfilmreviews.