In the aftermath of a family tragedy, an aspiring author is torn between love for her childhood friend and the temptation of a mysterious outsider. Trying to escape the ghosts of her past, she is swept away to a house that breathes, bleeds – and remembers.

Crimson Peak was awful, one of the most uneventful movies I’ve seen this year. Why? Because it was empty, made up of literally nothing with just a very simple story for viewers to hang on to. This love story was the skeleton of the movie but with no flesh on it, no substance. And as a result, watching Crimson Peak was an incredibly mundane affair.
Man and woman meet – instant desire – stupidly fast relationship development. This story was cliché and cringeworthy from the start which was tedious, watching two strangers fall in love without knowing a single thing about each other. Seriously; no sooner has Thomas looked at Edith and realised she is a female with a vagina, then he’s whisked her off to his huge mansion to live.
And it doesn’t get much better. What I anticipated would be a jumpy horror filled with twisted ghosts, resulted in simple banging on doors and the occasional appearance from a wriggly black spirit. Edith’s reactions to it were pretty relaxed too, walking – yes walking – away from one particular spirit haunting the hallway as though it was an irritating housekeeper she wanted to avoid. During this scene she notices it, turns calmly, makes no sound or shocked facial expression and walks briskly back down the hallway. It was literally unbelievable. 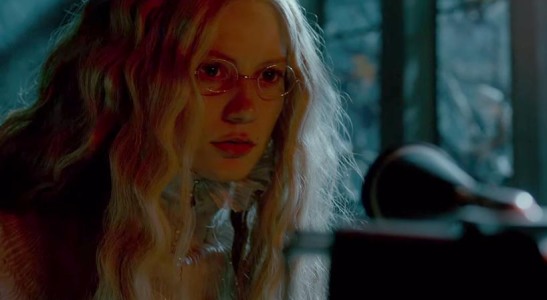 Man takes woman to live with him in his exquisite house. 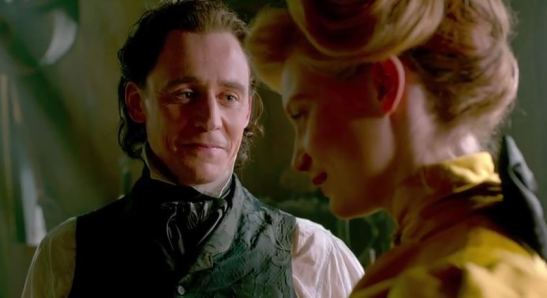 Disagreements between man, woman and man’s sister kick off which result in brawls and accidental murder.

That’s your lot, there literally is nothing more to it. And sadly, the ghosts / spirits are more of an undercurrent, thrown in to provide a bit of background atmosphere. I don’t think there was any aspect of this movie I enjoyed at all. The only effective things were the set and costume. The producers outdid themselves with the mansion; huge and scarily dark on the outside, the inside filled with winding staircases, arched hallways, gold framed paintings and other lush decor. Having Wasikowska glide through the property in her lovely long ruffled dresses, with jewellery and frizzy hair added to this glitz nicely. Great set and costumes. I can’t fault this at all, nicely done. 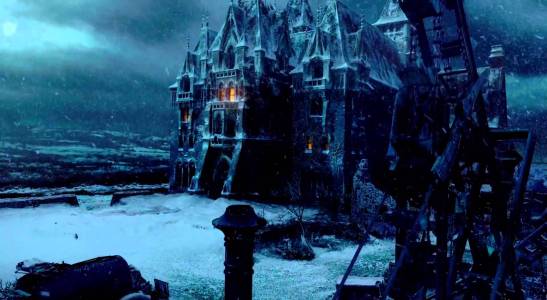 I rest my case.

Sorry people, but I refuse to talk about Crimson Peak any longer. It just isn’t worth my time.
The best thing about it: set and costume. And Jessica Chastain sporting different colour hair.
The worst thing about it: everything other than what I just said above.

This will go down as one of my top 10 worst movies of 2015, due to lack of plot and feeling and almost no substance whatsoever. During serious moments some audience members were actually laughing. Yes, it’s one of those sorts of movies. I’ll be honest – if you pay to watch Crimson Peak then you’re a bloody fool.
End of.

This entry was posted on October 22, 2015 by rickysfilmreviews.