Having thought that monogamy was never possible, a commitment-phobic career woman may have to face her fears when she meets a good guy.

Trainwreck is absolutely hilarious. I honestly wasn’t sure what to expect when I went to see it; I knew it was another creation from the man who did Bridesmaids so I expected at minimum filthy jokes and sarcastic one-liner’s. But what I got was so much more, and very entertaining. A brilliant mix of cast and very observant dialogue, Trainwreck displays nothing but complete honesty from beginning to end; its protagonist takes viewers on a journey which reflects everyday issues most of us face along the way – love, sex and sexual partners, disagreements with close family members, that classic indecision of whether to ‘be’ in love or just walk away from it..
The list is endless – but not a tedious endless. What this movie does is put it all on the viewer’s plate. Every emotion, each dilema, all irrelevance. I haven’t seen a movie in years (apart from recent The Diary of a Teenage Girl) that tells it like it is, be it raw and gritty or downright bloody hilarious. The characters Amy interacts with during the movie are just superb; each one holds his or her unique quality, it’s almost like a pantomime:

The witty homeless drunk who lives on the walkway outside Amy’s apartment and shares casual banter with her.

Work colleague Nikki who is a bit of an oddball, and appears to have a problem when she gets nervous whereby she cannot stop smiling – and it only gets wider when told to stop.

Hunky Steven, an extremely buff but slightly stupid gym addict Amy is dating who always says the wrong thing, and is riddled with a strangely homosexual underlayer. 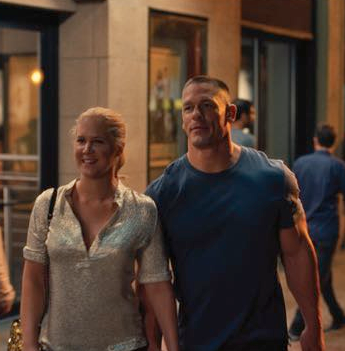 Gordon – Amy’s father. The man is so blasé and honest about life that he shoots comments (and often insults) straight from the heart. Whilst probably breaking other people’s. His character had me wincing at what was coming next. Brilliant.

These aren’t even a few of the people who make up the ensemble, there are plenty more. Frisky single guys, squabbling siblings, eligible but unwanted bachelors.. it’s a cast bursting with dynamics and this is definitely one of the best elements of Trainwreck.

Another thing that won me over was comedic timing. The script is juicy with one-liner’s, Freudian slip, and other dialogue. These are delivered with such brilliant timing that during certain scenes, it was as though I was watching a real-life documentary centred around a newly-dating couple. Amy in particular delivers lines with such comic precision that there is not one pause or breath out of place, she’s superb. So she has the upper hand being the experienced stand-up comedian, but I have to say the woman nailed it during Trainwreck.
Acting as pillars of support during the movie are the likes of:

Vanessa Bayer
The fact she has a very wide mouth and massive gums had me from the beginning, but appearance aside Vanessa brings an air of dry humour to the screen – it’s all in the facial expressions. As well as Nikki coming across as just plain weird which had me howling with laughter.

Bill Hader
The man helps carry the movie and makes a wonderful job of his role as sports doctor Aaron. Mature and driven, he is the total opposite of Amy – which makes for interesting and eye-coveringly embarrassing moments. The actor gives his character an air of adorable naievty in an effortless, swarve performance. 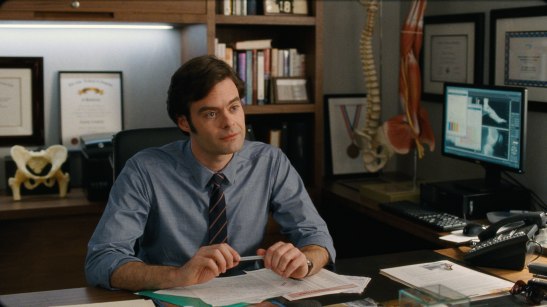 Tilda Swinton
Completely unrecogniseable as magazine editor Dianna, Tilda is just brilliant. Her sharp wit means her character is not to be messed with. I honestly had no idea it was Tilda Swinton until a few days after I saw the movie, she is that unrecogniseable. The woman is harsh. Cold. Direct. Boisterous. And above all, fucking hilarious. A comedy cocktail.

Amy Schumer.
American stand-up and director, and strangely a blend of both Melissa McCarthy and Seth MacFarlane.
I’ll explain..

In brief – Amy looks a bit like Melissa McCarthy when she pulls certain facial expressions.
And her dry, very observant humour mirrors that of Seth MacFarlane.
As I sat enjoying Amy’s flawless comedy Melissa McCarthy kept coming to mind; when she pouted or pursed her lips in a certain way or used similiar mannerisms to McCarthy. And by the time Trainwreck finished, I was convinced Amy was the woman’s neice if not daughter. The similarities between the pair are uncanny. See if you can spot what I mean.

Trainwreck is written by Schumer, and her material is spot-on. She nails it with regards to script that reflects real life; situations people find themselves in, how they deal with it, etc. I was very impressed by this. And in a sense, most of it reminded me of the material Seth MacFarlane comes up with in features such as Ted and Family Guy. Almost as though the woman is related to MacFarlane and carries the same ‘funny gene’, Schumer’s work bubbles with the same dry humour which is hugely funny simply because it is so real. It’s what happens to many of us. Top marks here.

One particular scene had me beaming with recognition, and it wasn’t even a major scene – it was simply in passing..

When Amy visits her sister Kim to talk through recent events, she confides in Kim about her feelings towards Aaron and how things are going. The conversation turns to “dealbreakers” and the subject of ‘The One’. Amy talks about Aaron’s quirks but that there may be guys out there who are better. Better sex. Better lovers. The honest scene lays everything about your current partner bare: what IF you’re happy with your girlfriend / boyfriend but there is someone out there who is better? Have you settled for second best when first best lives across the street? What do you base your relationship on – the sex or how happy he / she makes you feel? And most importantly – however well it’s going, your partner may have “dealbreakers”, in or out of the bed..

Superb. Just superb, everything coming out of the woman’s mouth was something I could completely relate to. I myself have experienced ‘mini crisis’ like this; feeling content with someone but realising I was stuck with that one person until it ended, therefore not being able to fully enjoy myself. And his imperfections; farting in bed or during sex (this angers me), adorable and conversational when alone together but piss-boring when meeting other friends.. and that classic, ‘he’s not bad at sex but what about that guy I met a few months ago who was incredible but had less personality?..’

This particular quirk is shown during Trainwreck when Amy is having sex with her gorgeous boyfriend Steven. As his smooth, bulging body seems to be doing the right thing grinding away, Amy appears to be totally dissatisifed at his lack of vocal abilty whilst going at it. She asks him to talk dirty but as he climaxes, he starts shouting out gym phrases and weight training instructions.

Whereas Aaron – pale, plain and nowhere near as fit as Steven – may not be a god of sex, but is highly intelligent and likes to hold Amy in his arms and talk after making love.

One may be hotter than the other, but it’s classic case ‘the hotter guy has zero personality to work with, the less hotter guy has a beautiful personality’.
I have personally experienced this plenty of times in life, and as I sat watching it happen in front of me on a movie screen I had nothing but a familiar feeling of ‘been there, done that’ whilst smiling. I love it when a movie can portray scenarios that people genuinely go through in life. Top marks here also. 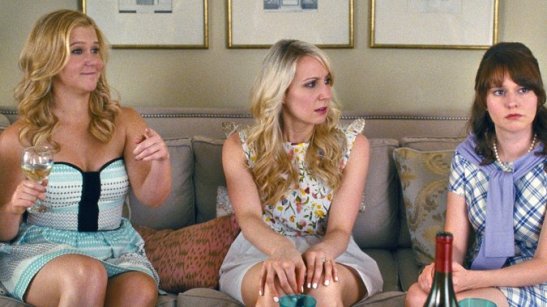 Trainwreck is just fantastic. From idle conversation between girls as they sit on the toilet peeing, to the uncomfortable atmosphere between particular people, the movie had the audience howling with laughter more than just a handful of times. And with laughter came stark realisation as the action being shown on screen became less theatrical and more genuine. More real. This movie radiated an air of truth all the way through, its observational humour and very funny script binding together to form a realistic presentation.
I wasn’t sure what to expect with this one – but I exited the cinema loving it.
If it’s a light and observant comedy you want, I recommend Trainwreck.
Feel good just felt better.
I will definitely be buying it on DVD upon its release.

This entry was posted on August 23, 2015 by rickysfilmreviews.