The Legend of Barney Thomson

Barney Thomson, awkward, diffident, Glasgow barber, lives a life of desperate mediocrity and his uninteresting life is about to go from 0 to 60 in five seconds, as he enters the grotesque and comically absurd world of the serial killer.

The Legend of Barney Thomson was another tediously dull affair at the cinema. I’ve had a few of these recently. Clearly Robert Carlyle thought he was achieving high standards by taking the reins and directing a movie himself, but his effort backfired wonderfully. This movie trailed along during its screen time with uninteresting conversation between characters and dodgy camera work which saw rocky close-up’s of the face of a worried Barney. But that wasn’t it, there was more – and it started right at the beginning..

The movie opens with Barney (Carlyle) talking about his daily life; his routine from leaving the house and going to work through to when he shuts up the barber shop in the evening. And this narration was hideous – almost inaudible, the actor waffles on about Barney’s life in a deeper than deep Glaswegian accent. I sat there staring at the screen trying to understand every word – I even looked away at one point so that I was looking into the darkness of the auditorium to focus on his voice, to try to understand it. It was horrible, a muffled stream of Glaswegian voice chatting away about complete crap.
Robert Carlyle may have done well trying his hand at directing his first feature but by Christ, he was awful at narrating. The man just doesn’t have the vocal quality in him and it showed.
No marks for this.

Wow.
Emma Thompson.
What a woman.
In all her talented glory, she waddles on to the screen as Barney’s mother Cemolina. And she had me hooked on her hilariously candid character from the second she spoke her first line. Almost unrecognisable from her usual self, the actress smashes through the other cast like a sledgehammer, outweighing the talent massively and delivering one of the most convincing characters I’ve seen in a while. It’s mainly down to her vocal talents; as Cemolina, Emma speaks with such a deep accent you’d probably think she was Scottish in real life if you weren’t familiar with the actress before. She’s fantastic to watch and listen to, I laughed out loud during certain scenes just by her uttering a completely normal word in that hilarious accent.

Emma Thompson wowed me and totally won me over just by being a good actress. She was the best part of the movie and sadly, mis-cast. Seriously, the woman didn’t deserve to be placed in such a mediocre film. She deserved much better, a film that had an interesting story and a powerful ensemble. She didn’t just carry this film – she made it – and if she wasn’t part of the cast lighting up the screen as she did, I might have waked out.

I just wanted to pluck her from the film and place her in something more interesting where her skills wouldn’t be wasted.
A very well done, Emma. You nailed it. 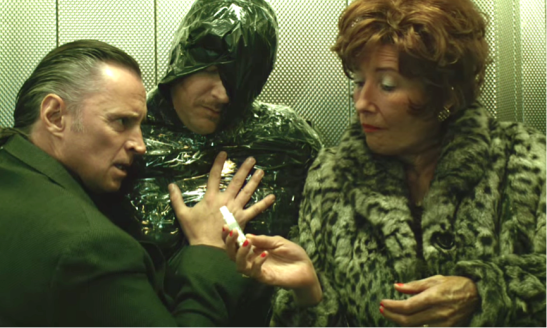 Ray Winstone.
British actor who has appeared in many films and television programmes as.. himself.

But in The Legend of Barney Thomson!..

..he was a gruff Londoner.

The man is just awful isn’t he. Yes, we all get the fact he’s a Londoner – but he just has to show us every time. In every movie he ‘stars’ in. I got fed up and bored of Ray Winstone years ago. For me, he’s joined the ranks with the likes of Hugh Grant and Simon Pegg – they very rarely (or never) put their acting abilities to full use and end up just playing themselves in everything they are cast. It’s boring. It’s really not entertaining. And it makes them look like simple ‘space-fillers’; actors wheeled in to pad out a movie instead of being genuinely cast because of the effect they’ll have on the audience – I.E. because they can act.

And what made it worse for Winstone during The Legend of Barney Thomson was the fact everyone was Scottish – except him. Barney’s colleagues in the barbers, the suspicious police officers, even the background extras were all Scottish. And then Detective Inspector Holdall comes strutting through the set, shouting demands in a cockney London accent. Proving once more that Ray Winstone is, quite frankly, incapable of acting and terrible at bringing a new character to the screen. Or perhaps he’s just unwilling. Either way, the man is as cold and unmoving as a gravestone.
The movie again loses marks for this.

..just when I thought the movie couldn’t possibly get any worse, the ending scene arrived. And it had to have been one of the most pathetic displays I’ve ever seen – even for a black comedy. Without giving the story away, it involves the detectives who are searching for Barney and Barney himself. And a gun.
Like a Shakespeare play gone wrong, the scene erupts in a frenzy of violence between the farcical characters, resulting in stupid ‘that wouldn’t happen – not even in a movie’ behaviour. I sat staring at the screen with my mouth open and frowning so hard I thought I was about to swallow my eyebrows.
It was just awful.
I wanted out.
I needed to exit the cinema ASAP.. 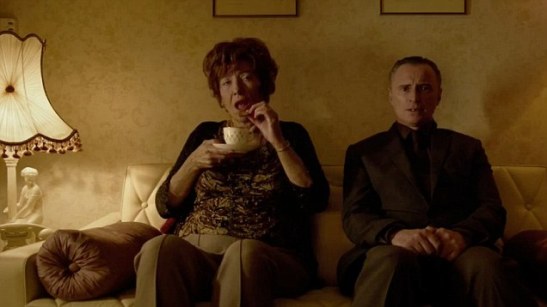 The Legend of Barney Thomson is a very bad film. Carlyle clearly thought he was on to something big when he was given the green light to direct his own feature, and got carried away. The man is a prime example of a person who is given something to play with but ruins it with their enthusiasm, resulting in complete crap. This movie was like a pretty ribbon-wrapped gift box with nothing inside when opened. Had Robert used a few more caricature-style characters to liven up the screen with bizarre going’s-on, this movie may have passed for ‘okay’.
I couldn’t find it showing in many cinemas and had to travel to see it.
Am I surprised about this?

This entry was posted on August 9, 2015 by rickysfilmreviews.