After young Riley is uprooted from her Midwest life and moved to San Francisco, her emotions – Joy, Fear, Anger, Disgust and Sadness – conflict on how best to navigate a new city, house, and school.

Let me make one thing perfectly clear:
This movie is superb in a psychological sense. From the opening scene the story delves into human emotion. In fact, it doesn’t just delve into it – it cracks open the human mind and examines the emotion in a colourful, humorous way. I found Inside Out very impressive on this scale, it is a brilliant way to animate the human psych. Like a film teachers should show in schools to their students during a psychology lesson, this movie would be an ideal way of ensuring the students absorb analytical detail by way of colourful entertainment. And it certainly is colourful..

Here we have Joy,

..four core emotions of the teenage human personality. They are situated in the mind of young Riley and react in synchronicity with her, steering her reactions to certain situations. And it’s interesting to watch, because the movie shifts from (as the title suggests) inside – to outside. Viewers are treated to teenage drama on the outside, and a funny but very true fantasty inside. Whoever wrote this movie hit the jackpot; he or she was clearly on the recieving end of some serious emotions or outbursts from various friends or family members, and wanted to explore them further – find out where it all comes from..

..and it worked.
This movie in my honest opinion, was fantastic. But not on a standard entertainment level; not because I warmed to the ’emotions’ or became wrapped up in their scatty adventure, but because of what influenced the movie, how it was made, and what it stood for. Inside Out is every psychologist’s dream, every cinema-goer’s entertainment. Which brings me on to my next point.. 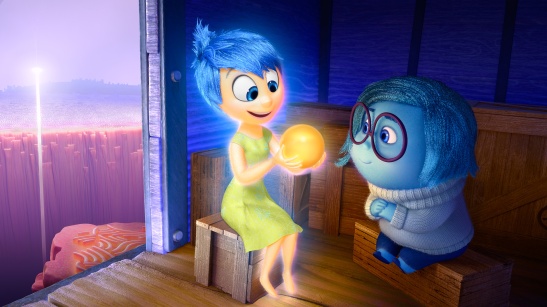 The atmosphere in the auditorium last Friday night was magic. It was a mix of adults and children when I went to this screening and both levels of human appeared to be enjoying the movie. In fact, the adults were responding more than the little ones during certain scenes. One guy sitting on his own down in the front rows was actually HOWLING out loud, which made the atmosphere that little bit better before another funny scene came around.

Call me too enthused about cinema but I honestly believe, like going to the theatre, audience reaction is a key element of the experience adding to the atmosphere of the movie being played. Laughter, gasps, the occasional scream, even people sniffling or squelching at upsetting moments, all fuel the experience nicely. It’s what cinema is all about I suppose. And Inside Out was a perfect example of evoking such responses. The audience loved it. 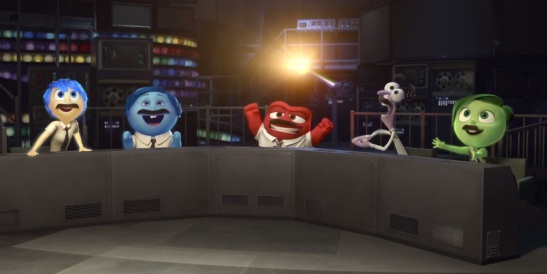 Like many movies, Inside Out wasn’t brilliant in every way, all the way through. It had its downsides. One of them being consistency. The movie seemed to trail off in a random direction at certain points – and this wasn’t in a psychological sense either (although the mode of transport between Riley’s stored memory and mind known as ‘Train of Thought’ was quite ironic).

The story involving Joy and Sadness as they journey into the girl’s consciousness to fix a major problem and restore her happiness flows with colour, mild humour. But it’s when the story seems to get lost in itself that the movie hits the skids. One scene sees the pair wandering around forgotten memories trying to find a way out. And this bit involves a lot of standing around. Joy trying to encourage Sadness with kind words, Sadness laying around on the floor. I had my arms folded during this scene, as I became slightly tedious at what I was watching (the audience were rather quiet during this bit too). It wasn’t great. And the irony of the characters getting lost and wandering off in different directions, before finding their Train of Thought was spot-on. The movie was doing exactly the same!

This is my main observation of the not-so-good element in Inside Out.

The emotions inside Riley steer her in various ways, almost as though puppeteering her. When they first stood at their control pad, I wasn’t sure how this was supposed to be working:
One of them saying, “I think they’re (Riley’s friends / parents on the outside) looking at us” made me think that was what Riley was then made to think. Were these colourful things basically vocalising exactly what Riley was thinking – because they were in charge of her thinking? The lines spoken by these emotions fell in line with what she was feeling or thinking, so I assumed they – however cute – were basically God compared to Riley. Another example of just how deep this movie delves, the psychological impact it has on its viewers. Interesting stuff.

There also underlies a few topical issues throughout the movie. It is laced with messages for children; such as following your heart, family relationships, pursuing your interests and reaching your goals. Oh, and the delicate issue of puberty arises as the movie nears its end with Disgust sneering down at their newly refurbished control pad and asking, “what is pub-berty?” (another howl from the guy down in the front row, along with a few others).
I would go as far as to say Inside Out is educational – great for getting its messages across, and in a very clever way. And that’s another element – the clever way some scenes played out. I was actually impressed at how the emotions each did something inside, to affect the girl outside. As I sat watching the tale unfold, I appreciated the cleverness more and more. Top marks here.

Inside Out is absolutely fantastic. And this is because of the messages it puts across and how it does so. This isn’t just a kids film which is full of colour and soppy moments, it’s actually a slick psychological examination of a human’s inner psyche – but brought to the audience with a sugar-coated story and fun characters. It does good in this style of delivery, because the subject could send most viewers to sleep – but it saves the day and its delivery makes it easier to absorb. It must have been not too simple to write a story like this, as you would need to create an exact situation / scenario where all emotions have to be used. If you’re into the whole subject of psychology and human behaviour, I have no doubt that Inside Out will be the right choice for you this week when you fancy downloading something to watch.

I was pleasantly surprised by this movie, its producers are to be applauded.
Great work. 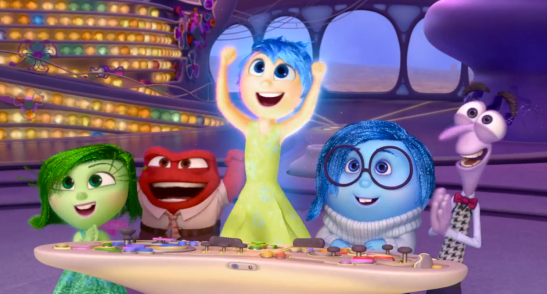 This entry was posted on August 1, 2015 by rickysfilmreviews.