Armed with a super-suit with the astonishing ability to shrink in scale but increase in strength, con-man Scott Lang must embrace his inner hero and help his mentor, Dr. Hank Pym, plan and pull off a heist that will save the world. 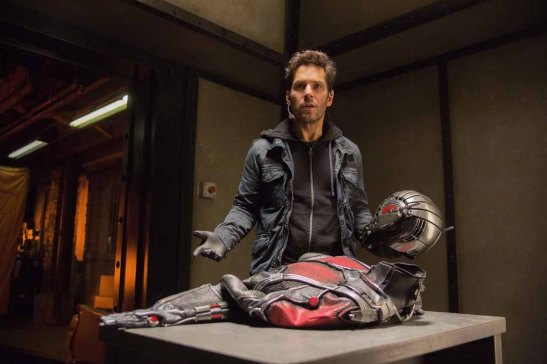 Honey, I Shrunk The Rudd

We haven’t had a movie like this in years; a man who owns a machine capable of shrinking objects – or people – to milimetres in size. Or in reverse, able to expand their size into gigantic proportions. This was the underlying theme of Ant-Man and the main element I enjoyed. I have to be honest – I have never heard of Ant-Man. Not comics, cartoons, nothing, which is why I was surprised when Marvel released this movie. But hey, I gave it a go. And boy, was it different..

Ant-Man is an extremely simple concept; deadbeat father given a super-powered suit and the ability to fight like a soldier whilst being the size of – amazingly – an ant. It contains the obvious; ex-wife and child. Archenemy. Unsuspecting friends. But although cliché, the movie works. It doesn’t get dragged down by lengthy scenes or dialogue, it flows rather quickly. But a little too quickly perhaps – because no sooner has our protagonist made his first appearance and discovering the suit – he’s suddenly saving the world. Ant-Man delivers enough entertainment to keep the viewer going, but feels rushed somehow. Everything kind of happens immediately, as though it was shot in one take. Still, I kept watching. I wasn’t bored or tedious which was a good thing, and a few parts made me laugh out loud. I was nicely entertained.

As I mentioned above, the whole ‘shrunk’ and ‘blown up’ element was fantastic and something we need more of in movies these days. I mean, how many of us have fantasised about this? I was instantly reminded of Disney classic Honey, I Shrunk The Kids (and its sequel) as I watched Paul Rudd get his atoms zapped. His first experience is when Scott stands in his bathtub and activates his newfound outfit. He goes from standing behind the shower curtain to sitting in front of a bath plug which he could easily climb like a mountain. My eyes widened. I loved it.

And to mirror the old Disney classic, viewers even get Rudd flying around on a giant insect during certain scenes. These scenes where Scott became tiny got reactions from the audience – laughter mainly. Most of them seemed to be enjoying his ass-kicking ride from big man to small man. 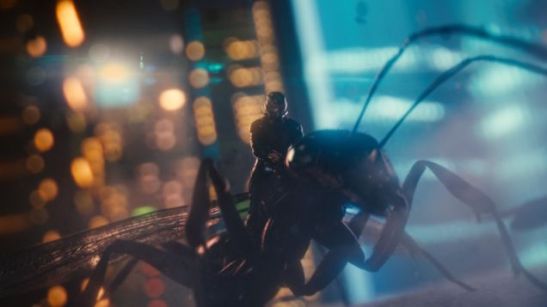 One fight scene between Scott and Darren is set in Scott’s daughter’s bedroom, and sees very speedy action take place amongst the toys. One of them being Thomas the Tank Engine which Scott accidentally zaps into giant size. The train goes smashing through the window and into the street, Thomas’s eyes rolling left to right as it continues peeping away. The audience loved this, it brought a lot of laughter to the auditorium – and the ant who gets enlarged also.. great entertainment.

I can’t fault the imagination behind Ant-Man, the movie is slick and colourful. It’s filled with hi-tech gadgets and machinery. Laser guns which turn people shot into a tiny blob of (what looks like) jam. Gorgeous metal suits. And of course, ants. The movie wouldn’t be complete without ants. And the visuals used to portray the cute things are fantastic. Yes – I actually just referred to ants as cute. In any other situation I fucking hate them, but in this movie they are nothing short of adorable, as they cluster together to aid Scott on his mission to stop Darren from potentially destroying the world. And they’re not just ants. They come in various ‘styles’. Firey ones capable of creating bridges and pathways by huddling together, soldiers who spread themselves around their victim like guardians who omit a lethal poison if pissed off, and normal ones who are just plain helpful. During one scene, Scott sits at Pym’s dining table and is offered tea. It is poured – and then Pym manipulates a few little ants to pop sugar cubes in. The insects push the cubes towards the cup – Scott refuses the sweetner – and the ants quickly turn around and push the cubes back to the bowl. Cute! I loved this bit. And it’s an example of what you’re dealing with when you watch Ant-Man; comedy mixed with fantasy mixed with visuals. It’s not bad at all. 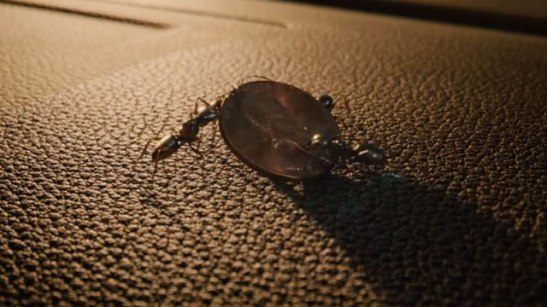 Paul Pulls it Off

A few people I’ve spoken to about Ant-Man have come back with the same query: Does Paul Rudd pull it off? He isn’t exactly super-hero ‘material’? And this is vastly different to anything else he’s done before.

Yes. He pulls it off nicely. Although this is indeeed quite different to what the actor has delivered before, Paul portrays Ant-Man / Scott Lang with great energy. He’s sexy and has a slick attitude which actually makes for a different kind of super-hero: one who has a genuine air about him, down to earth. Paul gives us a dedicated family man character played with total passion (you can see it in his eyes during scenes involving his daughter) and blends it with swish robotics during the rest of the movie. I think Paul manages to pull it off due to being so different, he steps up and brings a refreshing new form of hero to the cinema screen. He’s not arrogant like Iron Man, a bit simple like the recent Spiderman, nor does he throw his weight around like constantly frowning Thor. He’s just an average guy with issues in his personal life who is given a chance to shine. And it works well. Good stuff. 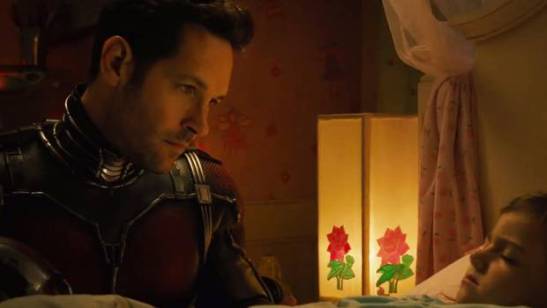 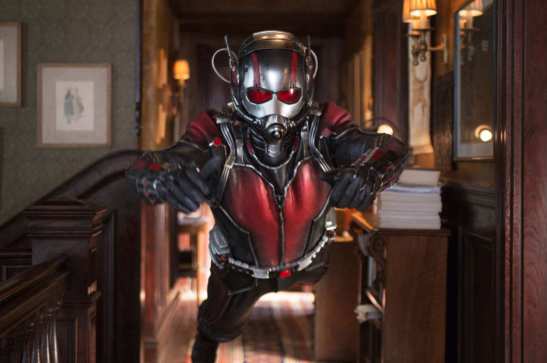 Instead of a feature-length movie, Ant-Man felt like a Doctor Who one-hour special. Sinister entrepeneur with an evil plot, robotic insects and technology, a hero and his sidekicks, exploding conference buildings..

It was good viewing, but I couldn’t help thinking it would have been better condensed into a popular sci-fi television episode. As well as this, there was something missing in the format of the plot. Although Ant-Man is written and filmed quite differently to your standard Marvel flicks (which is a good thing obviously), it has a drawback. And I think it’s the way the story unfolds; it all kicks off pretty damn quick with little build-up of tension. Viewers are thrown immediately into the action – good thing or bad thing? And then a series of disjointed scenes follow; Darren’s business meetings and plot hatching, Scott’s fight training, etc. The movie jumps back and forth between fantasy action and Scott’s family at the same time, giving a whole lot of plot – but in an untidy order. There’s substance, but it’s all over the place.

Something else was missing here too. I can’t quite pinpoint what it was but a particular element was absent, unused. Yes, Ant-Man was produced differently to other Marvel movies, and that wasn’t a bad thing. But something else was. There was room for improvement on this movie, I’m certain. 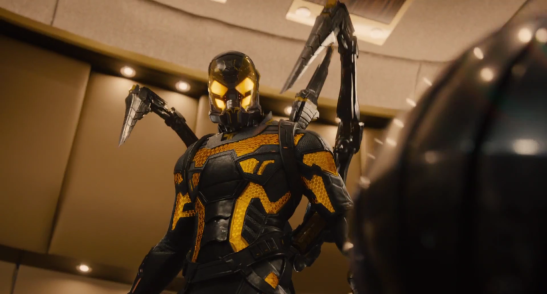 I’d like to know if anyone else found the opening scene with Michael Douglas as interesting as I did. The movie opens in 1989 when Hank Pym storms into the HQ of S.H.I.E.L.D. and makes a drastic decision upon discovering they tried to replicate his Ant-Man shrinking technology. But I wasn’t interested in what was happening on screen, I was hardly even listening – I was staring directly at Michael Douglas with my mouth slightly open..

The man’s face was incredible. As though the producers had time travelled back to his Basic Instinct days and dragged him into 2015 for Ant-Man. His face was as fresh as it was back then; clear skin with tight facial expressions. Slightly leathery, but still quite fresh. I don’t know how they did it but Michael looked nothing like he does these days. A good thing obviously, seeing as this scene was set back in the late eighties but still – the way in which they made him up was fantastic. Top marks here. 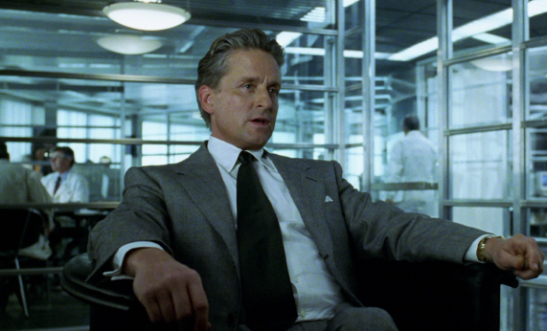 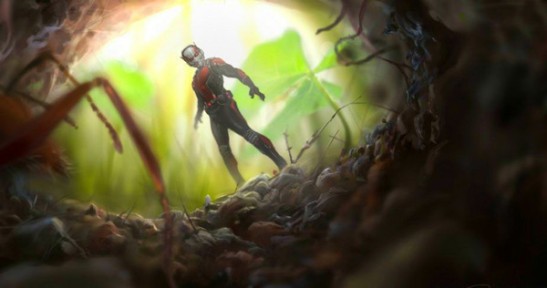 Judy Greer is in this movie, she plays the part of Scott’s ex-wife Maggie. And again, it was nice to see her. Although..

When is she going to be given a main part in a movie? Directors seem to be “using” her lately. Put in Jurassic World as a mother again. Placed in Tomorrowland: A World Beyond as an unrecognisable bit part. She was even used as a female ape in Rise of The Planet of The Apes. She does good in anything she’s in, but I want to see more of Judy – not just ‘extra’ parts. The woman is actually a very talented performer, it’s just a shame she’s only borrowed for small roles in these movies. When she popped up in Ant-Man I felt a comfortable recognition; she’s like the big sister of Hollywood, it’s great. But come on people, she deserves more than just ‘in and out’. Sort it out Hollywood, you’ve got talent there. Don’t sneer at Greer.

With massive imagination and a refreshing plot, Ant-Man is a great little action movie. Marvel cooks up something new with this, something simple yet incredibly effective to rival those other hero movies. The Avengers, Captain America, Thor.. they’re all too processed and pretentious, whereas Ant-Man is not as overcooked. Plausible plot and bizarre antics make this a pleasant watch. Paul Rudd is fantastic as the lead role and the fact it is very different to what he’s done before makes this movie all the more enjoyable. It might not win any awards, but Ant-Man passes the time nicely with decent special effects and some witty dialogue shared between its actors.

As mentioned above, there are slight plot holes – but don’t be looking for an in-depth story when you sit down to watch this and you won’t be disappointed.
Not a bad movie at all.
Nice one.

This entry was posted on July 19, 2015 by rickysfilmreviews.