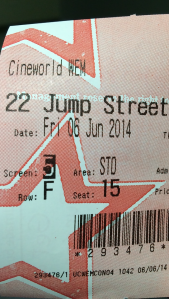 Schmidt and Jenko made it through high school – twice. And now it’s time for college.
Following a massive craze for the drug ‘Why-Phy’, the pair are sent deep undercover to expose a drug lord at the college he / she attends.
But when personal circumstances get in the way and jeopardise their operation, Schmidt and Jenko realise they may have BIGGER problems in store… 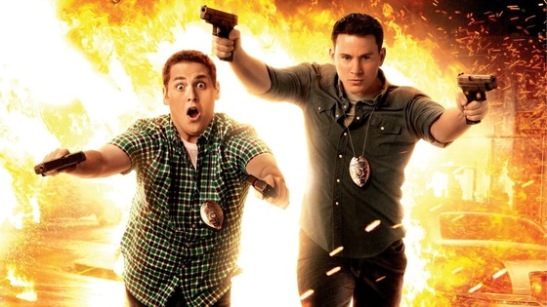 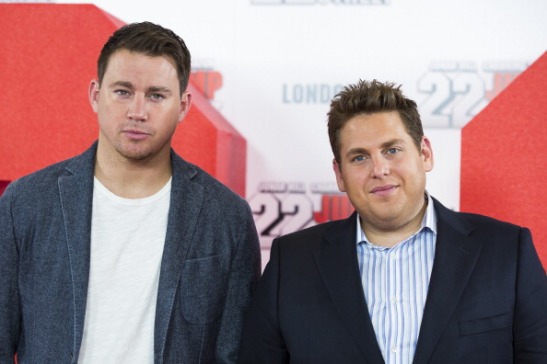 My first observation of this movie is that it isn’t just watchable – it is beyond watchable. One of those films you leave running whilst doing your nails, etc. – for me personally it’d be running in the background whilst I was having a text conversation with a friend about the filth I got upto the night before.
Yes, it is that capturing.

What we have here are two guys running about acting like idiots whilst college students party around them. It is a tale of an undercover mission to bust a drug dealer but ultimately, is Tatum and Hill thrown on set and instructed by the director to be role models for immature people. I can imagine the director yelling, “be as funny as possible guys, lose yourselves in the wild script and above all – just. Have. Fun.”
One of those pep talks which basically says to the recipients: “just improvise. Not a lot of acting required”.
And boy, did the duo follow suit. 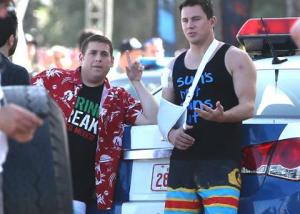 But far be it from me to slate a movie in its entirety; as always I bring you the good’s and the shit’s. So let’s get on with it..

Many gags and one-liner’s delivered by characters during the movie got absolutely no response, and in fact brougt nothing but silence when he / she dropped the ‘funny’ joke. For example, during one scene Jenko is faced with questions from Captain Dickson and during answering one, says, “I thought it was Cate Blan-chett?.. oh, carte blanche?”.
A play on words which got no laughs from the audience.

Another scene sees Jenko and Schmidt walk into a situation they have to deal with – one says, “let’s not get ahead of ourselves”.
“we’re not, we’re next to each other” the other responds.
Silence in the auditorium.

And I’m afraid the flops just kept coming. There were gags which had the audience giggling on and off but the bad jokes were like pissing on a healthy bonfire, completely extinguishing any humour which if written and delivered in the right way may have actually been quite funny. 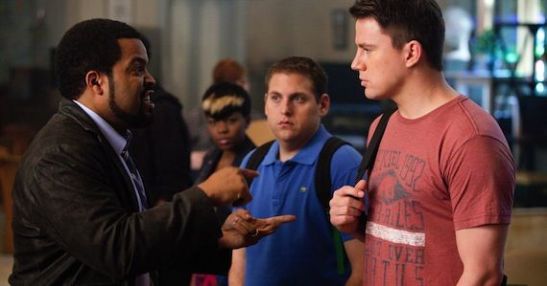 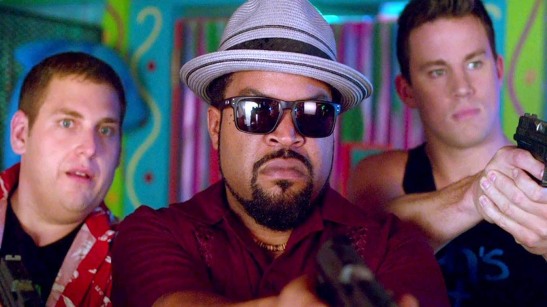 There were flaws in certain scenes which didn’t fit properly. The first being the octopus attack in the back of a warehouse delivery truck; Schmidt opens a container and gets smacked in the face by a wriggling octopus. As he tries to tug the slippery thing off of his face, it squirts a load of ink over him. The black ink is spattered down the right side of his face.
The camera pans across to Jenko – then back to Schmidt, and voilà! The ink is gone!

The opening scene sees the pair involved in a chase with a group of bad guys, atop a moving truck. When Schmidt is tossed over the side of the vehicle, Jenko pulls him back up. The transition between Jonah hanging down and then rolling over on top of the truck is bloody awful. I couldn’t tell if a stunt man was used or not, but the way he casually rolled over looked as though no physical acting / comedy had been used at all.

On more than one occasion I didn’t just roll my eyes – my eyeballs literally looked up and over to the side, as I mumbled “fuck sake”. 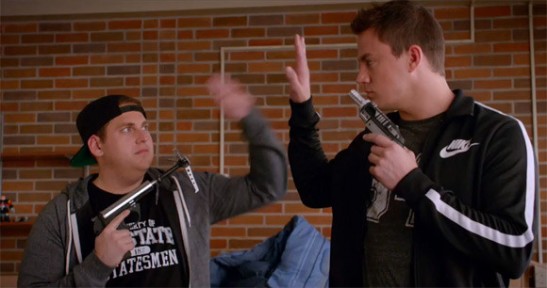 A car chase kicks off betwen the group of bad guys and the two undercover agents. Jenko and Schmidt jump into a vehicle shaped like an American Football helmet and speed across the university campus in the hopes of a quick getaway. But as the smoke pours from the engine, conversation turns to how rocky the pair’s relationship has become. That’s right, instead of focusing on the fact they are being shot at from somewhere behind and might die, one of them starts talking about how they should both “go our own seperate ways”.
It was the tackiest ‘getaway’ I have ever seen. Nothing about it created tension, excitement or comedy.

The bad guys in pursuit of the boys are nothing more than a bunch of Pantomime villains; the tall one, the short one, the leader, the joker – the group are the most tame bad guys I’ve ever seen in a movie. 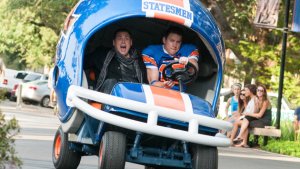 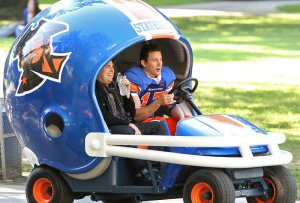 Channing Tatum. He’s not a comedian. He’s not the best emotion-portraying actor. In fact, he isn’t overly effective at all. Directors stick him in movies and the man seems to glide through them effortlessly (literally – not much effort) whilst ensuring his biceps are on show constantly.

In 22 Jump Street, Channing really isn’t overly funny. Jonah seems to carry the script with his naturally comedic style but Channing appears to be the ‘hunky older brother’ standing next to his on-screen partner with disapproving looks on his face. Oh the man can coast his way through any production, that’s fine – but he lacks substance. Depth. Other Hollywood actors have certain qualities about them – I.E. Melissa McCarthy is hilarious, Liam Neeson is intense, Meryl Streep is brilliant at characterisation.
Channing Tatum – is hunky.
That is all. 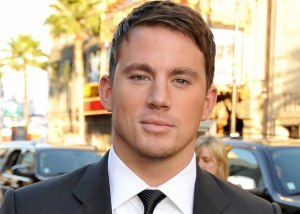 Lines he delivers (which if delivered properly by any other actor would’ve been hilarious) fizzle out immeditely, and any attempt at being funny falls flat on its arse. Channing just isn’t funny. But hey, the guy has managed to slide through Hollywood nicely by being the cliché token hot dude, so well done to him I guess. 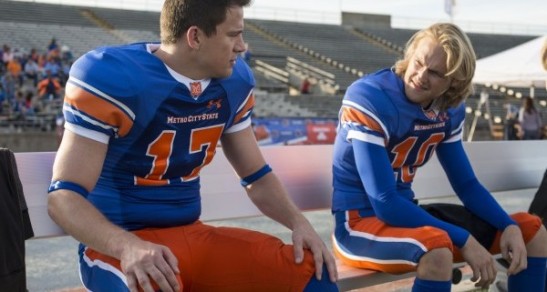 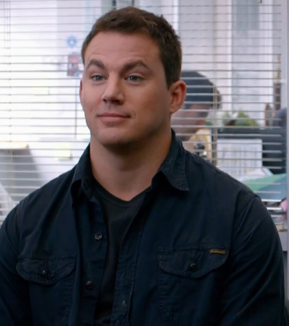 The possibility of this movie NOT being made.

On a serious note, the helicopter scene at the very end of the movie was good. It was literally the only bit I enjoyed. 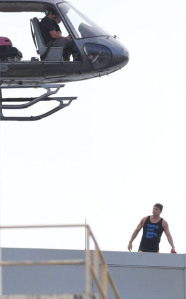 I really liked the first movie, but this one was like an empty shell – the concept was there but the producers didn’t manage to fill it enough and this let it down badly. I wouldn’t recommend ANYONE to sit through this tripe. Avoid it at all costs, it really isn’t worth paying to see.
Christ, if I spotted it in a supermarket bargain bin for £1.00 I still wouldn’t give it a second look.

This entry was posted on June 7, 2014 by rickysfilmreviews.