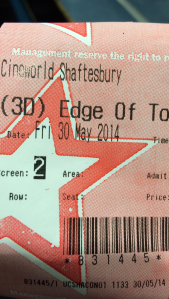 An alien race has invaded planet Earth and is beginning to swarm across the globe, and Major William Cage is quickly called to London to help fight in the war against the creatures.
Until the day he dies.
..then wakes up again.
Then dies.
Wakes up again.
Dies.
Wakes up. 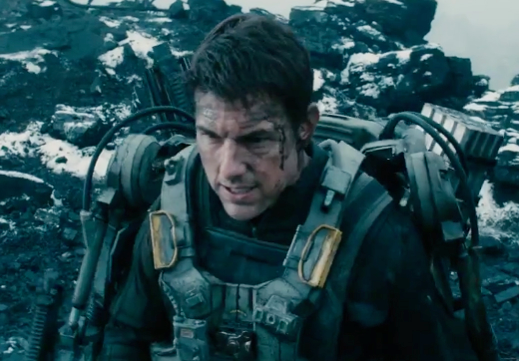 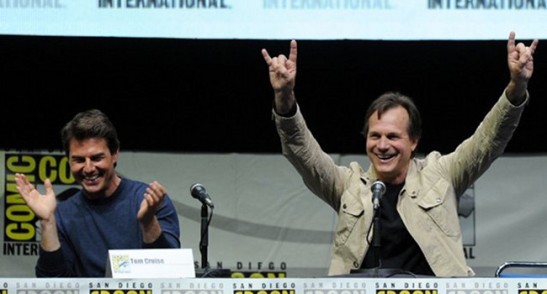 I won’t lie – I found myself wanting to fall asleep within the first twenty minutes. And I don’t usually do that during movies. As Tom strut around the set delivering half-arsed facial expressions, I felt my eyes get heavier..
I was bored.
I quickly checked the Cineworld app on my phone.
Read the synopsis.
Sighed.
The movie detail referred to Cruise’s previous flick Oblivion in classic, “if you liked that, you’re gonna love this!” kind of way. 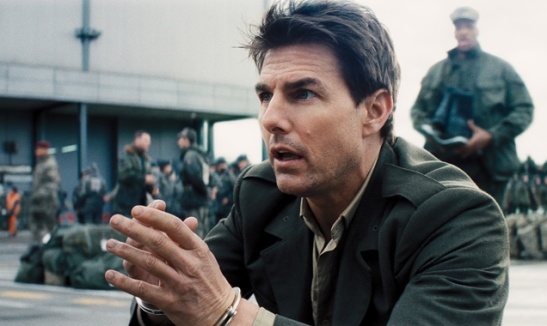 The good thing about Edge Of Tomorrow is that it gets going immediately; the opening scene being Cage dropped off in Central London by helicopter (namely Trafalgar Square – a part of London I’ve ended up on many occasion, although never by helicopter) before jumping straight into the action under orders of a stern military leader. The sinister situation then begins when Cage is killed within minutes of entering battle between his men and the Mimic’s. Because he suddenly wakes up back when he was given orders and shipped off to war. Living out the same day again and again, Cage needs to figure out how to destroy the alien invaders.
Its War Of The Worlds meets Groundhog Day as a bizarre series of events unfold – and repeat. 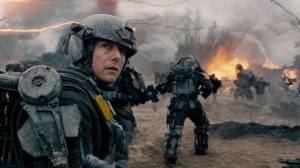 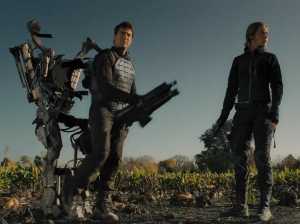 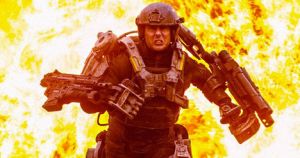 The graphics in this movie are great, very effective. A good effort has gone into the Mimic creatures – the main one is a nasty bastard who kind of looks like an octopus on acid – with nice use of colour / lighting.
Although the effects were great, I did have a slight headache at one point. The battle scenes are very quick, soldiers and monsters jumping all over the screen with sand and other crap flying about.. there was so much on screen moving so fast all at once that it was actually mind-boggling. Tom jumps, Emily jumps, a Mimic spins across the screen, sand flies toward the camera.. I honestly felt a bit nauseous.
Although the Mimic’s are the main threat, much of the focus is on Cage and his unusual situation of time-jumping.

Filming locations used are mainly Central London. Trafalgar Square moves over to Blackfriars Bridge, and you get a nice view across the Thames – before the water starts to ripple..
It was strange having Bill Paxton announce “this is Heathrow” – but nice all the same. I love it when London is used for filming, the beauty of this diverse City needs to be focused on more; instead of the skyscrapers of bloody Manhattan.
Quite literally the only use of special effects / CGI webt into the Mimic creatures; the rest of the movie is a load of people in metal outfits, strutting around. 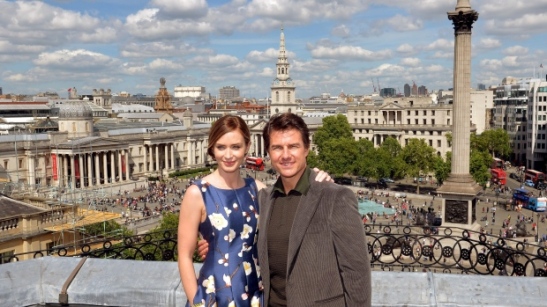 From the opening scene up until the aliens make their first appearance, Edge Of Tomorrow was watchable – but boring. Troops are seen exercising, socialising and training. Sergeants are stood around, barking orders.
But what I first noticed was the lack of detail. There was absolutely no mention of the battle Cage and his team were about to undertake, instead conversation centred around the soldiers they had lost, and how good this bunch were going to be.
The characters talk purely about themselves and their situation, rather than the Mimic’s and the invasion. It was all so incredibly vague that I found myself immediately losing interest in the enemy – not good.

The overall concept of the war between human and Mimic was good, with the potential of erupting in some fantastic action scenes. But I was bored with it all. The main fight scenes just didn’t quite cut it, they were nowhere near as effective as they could have been – again, the action on screen whizzing and splatting about behind a haze of grey smoke was so fast that I literally gave up. I sat back and let the movie go over my head rather than remain captivated by it. 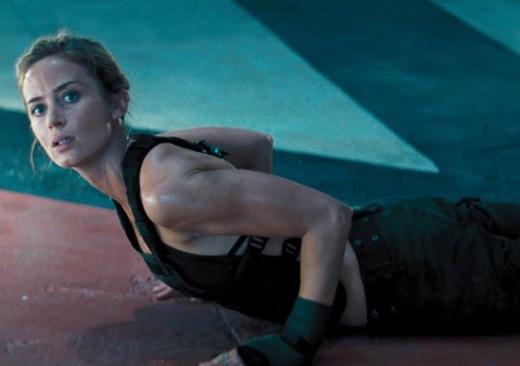 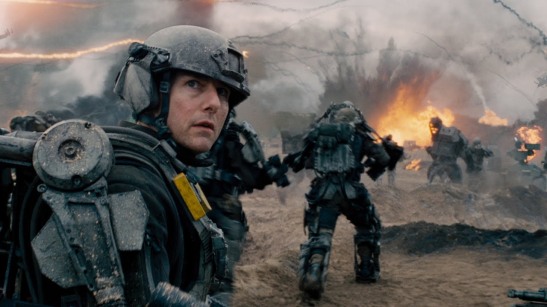 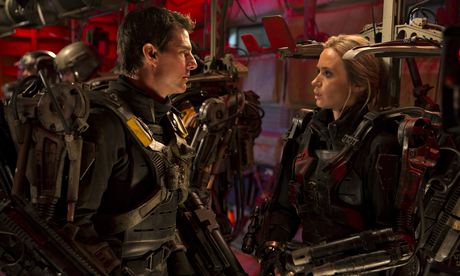 The most irritating aspect of the movie was Cage’s team.
When he first meets them, they are weary of the new arrival and remain distant. So how do you break the ice and have the team put their entire trust in you?.. tell them you can see the future of course.

Yes, instead of running away from Cage, they all suit up and await his orders, putting their lives in his hands. There is a very quick scene where the troops are sat huddled discussing his intentions, and immediately decide he is legit – because he knows minor details about each one of them. The slightest bit of personal information could slip out of someone’s mouth (when drunk, sleeptalking, etc.) therefore being knowledge for someone else, which is then passed on to others. But no – Cage’s absurd story immediately becomes believable and the troops put all their faith in him. 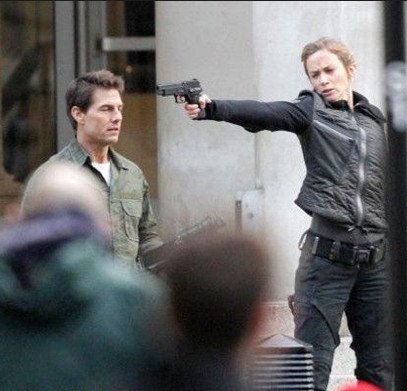 Even though I thought “what the hell is this? Time travel or a war?” halfway through, I have to admit the whole thing is incredibly watchable. So one or two bits have their flaws, but other than that Edge Of Tomorrow remains easily watchable from start to finish.

Apart from looking as though she’s suffering from severe hay fever, Blunt is a strong supporting actress throughout. This isn’t one of her best movies though – her acting remains on the same level constantly, as Cruise takes charge of the screen. I’ve seen her perform much better. 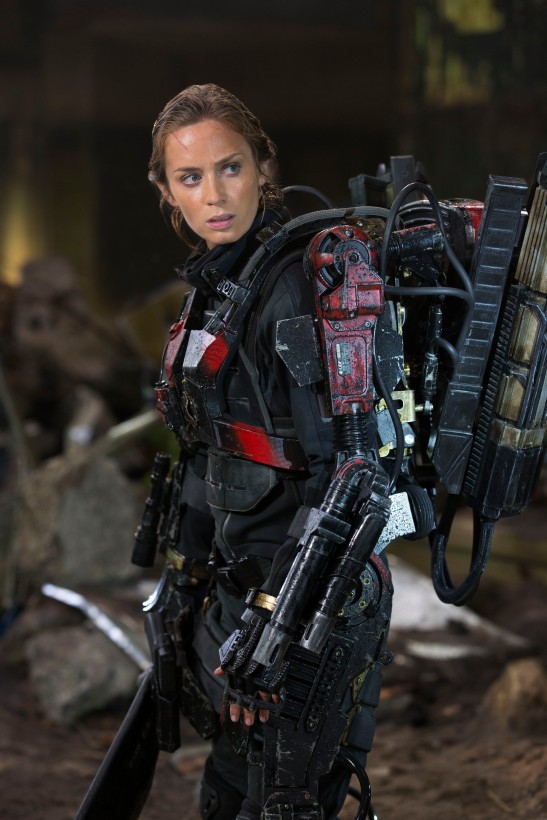 On a random note, I couldn’t help wondering what happened to all the Tom’s.
His character has to die before the day is out every day, and it left me wondering where (whenever Blunt blasts his head with a gun) his dead self ended up.

..maybe they try stacking them on top of each other to see if they can make Tom average male height.
You never know. 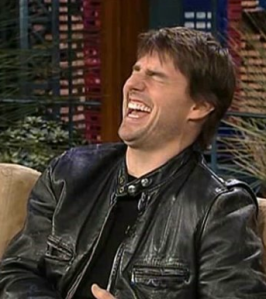 Overall, Edge Of Tomorrow was watchable if slightly boring.
Its concept is interesting and contains a simple story which is easy to follow – my only complaint is that it doesn’t focus much on the main enemy at all. Had the director included the Mimic creatures in the action more, the movie may have been a lot more entertaining.
This movie seems to have made a lot of hype for itself, but it really isn’t ‘all that’.

I seriously wouldn’t pay to see this – wait for the rental.

This entry was posted on May 31, 2014 by rickysfilmreviews.