X-Men: Days Of Future Past

The X-Men send Wolverine to the past in a desperate effort to change history and prevent an event that results in doom for both humans and mutants.

This movie was very watchable. I’m not a huge follower of the whole comic-turned-film thing but I was kept entertained all the way through X-Men: Days of Future Past.
It contains elements that would appeal to any age range; superpowers and great special effects for kids, involving storylines and a bit of romance for the young adults, as well as some adult humour for the older generation.
This was proven as I sat there, when a little child clapped his hands and vibrated with excitement – and then during a scene a while later, his father roared with laughter.

The story gets going almost immediately; no sooner has Wolverine made an entrance is he then sent back in time by Kitty where the action kicks off full throttle. And it plays out rather well, the action flowing at a nice speed throughout.
This reminded me of one of those films you lay on the sofa watching on a quiet, rainy evening – remote control in hand as you could quite easily switch channel and watch something else.. but the movie is entertaining enough, so you leave it running.
Overall, I was satisfied with the amount of action and witty dialogue Days of Future Past provided.

Hugh Jackman nude. Fucking incredible.
The scene where Wolverine first wakes up in 1973 sees him laying in bed with a pretty woman. But when he pulled back the covers and stood up, I swear I felt my anus pulsate..

Hugh stands up to reveal a chiseled, ripped body and beautiful tight butt – he literally looked like something from the Bible which would drop out of the sky fluttering its angelic wings. At this point, the father and child in front of me were completely silent – the only noise coming from me as my mouth hung open (wider than normal) whilst releasing a sort of, “uuuhhnnmmmmp..phf” sound.
I can confirm I felt satisfied.

So cross your legs girls and guys, Hugh displays so much beautiful veiny flesh, it’ll make your pelvis give way.
Lucky fucking wife, that’s all I can say. 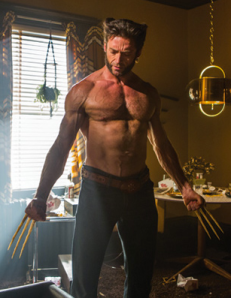 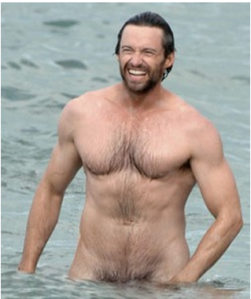 I honestly cannot fault any aspect of the special effects used in this movie. The producers nailed it. Colourful CGI effects bounce across the screen throughout the film – be it in the form of fire and ice, crumbling buildings or main characters.
My favourite scene has to be ‘on the wall’. An interesting scheme whereby Logan, Charles and Hank call upon Peter Maximoff for help inside The Pentagon when they are faced with gun-wielding guards. Time becomes suspended as Peter (a mutant who has the ability to move blindingly fast) whizzes round the inside of the room they are all in, animating the guards into various positions which would mean them firing at each other rather than at the X Men.

He jumps up onto the wall and runs around it at light-speed going about his business whilst Jim Croce’s Time in a Bottle plays. His speed blended with frozen time created a brilliant show of slow motion graphics which glimmered with clarity; and with the 1972 hit blaring out, the overall atmosphere was surreal. The audience were actually laughing out loud during this scene, which also gets points from me – it was very entertaining.

Another scene sees stubborn boy Magneto (Fassbender) use his powers for more heavier lifting. When President Nixon unveils the Sentinel prototypes on the White House lawn, Magneto lands himself in the middle of the Robert F. Kennedy Memorial Stadium. He uproots the entire stadium with a flick of his arms and floats it over to the White House where he then brings it crashing down to form a barricade. I quite liked this. Again, the special effects were faultless and very effective – so it didn’t make me go “wow” but it certainly made me go “whoa”. 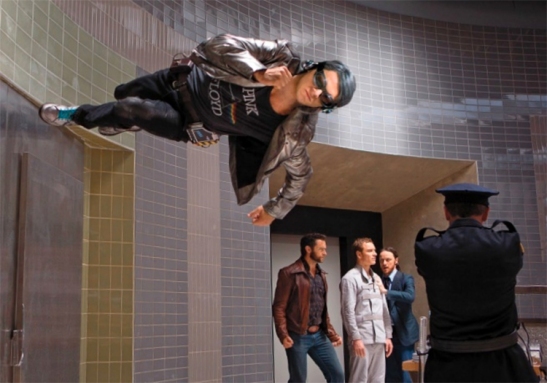 The cast who carried the movie were great, I can’t fault any of them. No one was overly bad, even the mother of Quicksilver managed to get a laugh from her exasperated “what has he done NOW?” as she throws open her front door.

Halle Berry – looking much older, this is clear to see – but nice to have her back

James McAvoy – as vibrant as ever, delivering a very effective performance which is completely natural no effort at all for him

Patrick Stewart & Ian McKellen – good to see the old faces return for this instalment,  they complete the ensemble nicely in a sort of neighbourly way like familiar friends

Ellen Page – even with long feminine hair, still looks like a raging lesbian

Evan Peters – brings a cute, fresh face to an otherwise fully-grown adult cast. Nice to have him thrown into the mix.

X-Men: Days of Future Past wasn’t a bad watch at all. So it may not have been the best thing I’ve seen, but it kept me entertained for its entire screen time (especially Hugh’s arse).
Its special effects are its winning formula, bringing the movie to life on the big screen fantastically, with a slick, witty story running alongside. It is these two elements which seal the deal and make for a good watch.
Fans of Marvel and the previous movies will no doubt love it, and I’d urge anyone else to give it a go if they’re stuck for something to rent on a Saturday night.

This entry was posted on May 27, 2014 by rickysfilmreviews.