Story of a young man desperate to be a musician, who runs away with an eccentric pop band.
The band is led by a man named Frank – who appears rather shy..

There was only one question on my lips throughout this movie..
“will he take it off?”
You know – the head.
As bizarre as it was, I actually got used to the head – it became part of the furniture, part of the character. A prime example of something you find bloody weird at first but as it becomes more constant, you get used to it. And the way Fassbender’s voice resonated inside was rather sexy – deep, husky. Woof. The whole concept of ‘the head’ created an element of intrigue throughout the movie, will he take it off or not?..

The very first moment I saw the poster for this movie, I felt a shiver.
When I was a youngster in the early 90’s, we had a colourful array of children’s television programmes. One day during one of them, a certain character strutted on to the stage.. and scared the crap out of me.
Big oval-shaped head, eyes that didn’t just look in your direction – but engulfed your entire head, and a raspy, almost snooty voice escaping from the hole in its mouth.

WHAT THE FUCK WAS THIS THING?!

And now he’s back. Although nowadays I find the head more boring than scary; when you think about it, it has to be one of the most subtle pieces of paper mache ever. No effort went into that thing, it was simply squished into a ball – and then had obvious facial parts painted on it. But somehow it became famous. (but then hey, certain people from Big Brother became famous and look at them).

My only query was why? Why did the director – sat amongst A-list celebrities and Hollywood filmmakers – reach over to the U.K., select a random TV character from the 90’s, and drag it back to his studios to produce a new movie with it? Apparently co-writer Jon Ronson was part of Sidebottom’s band and this movie was inspired by the character himself. But its still a bloody random idea.

This was my main rection throughout Frank.
I found myself completely baffled by the going’s-on, yet there was something which remained incredibly endearing about the story. Frank (played sweetly by Michael Fassbender) brought a lovely, almost adorable presence to the screen just by delivering the script. His naive way of pausing before speaking as if thinking hard about what he was about to say was so cute. And it was rather incredible how a man no-one had ever seen managed to capture hearts, inspire people.

This movie was strange – but as much as I sat frowning, I was smiling. 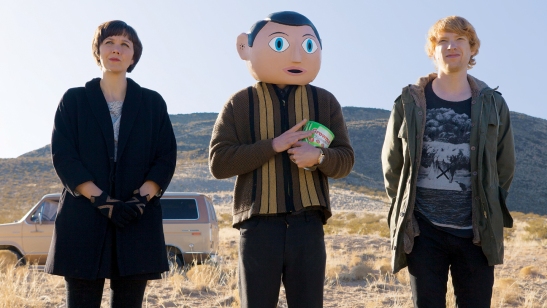 94% of this movie is absorbed in music, how the group try desperately try to record and release their first album. Half-helped, half-hindered by Jon (Gleeson), the band shut themselves away on a remote Irish island for over a year as they spend every hour of every day playing, singing, recording.
A lot of focus is on the instruments they use, with one or two scenes being rather special.. At one point the group venture into the woodland outside and strike up a percussion symphony, using random objects such as plastic, grass, paper, etc. So if you’re a musician or just heavily into music, you should gain more than enough satisfaction from watching this lot perform. (however tuneless one of them may be..).

Toward the end of Frank, I felt a little emotional.
One of the final scenes sees Jon travel to the home town of Frank himself, to speak to his parents. And it is quite sad.
After running away from the band, a brutal collision with a car causes Frank to lose his (outer) head, the man is now fully exposed. And when Jon finally faces him (pun fully intended), the emotion accelerates and pours from the screen nicely.

Jon sits talking to Frank’s parents in their lounge, as he lurks in the background, head bowed sadly, sipping a carton of juice through a straw. And suddenly, his background is revealed. The man suffers from a mental illness at the same time being slightly facially disfigured.
The vulernability of Frank as he looks sadly at the floor whilst sipping juice was heart-wrenching. A little later during the final scene, the group – without Frank – are up on stage performing in a small bar. He walks in. Is given a microphone. And very nervously starts improvising / singing a song.
Tears stream down his face as he does this.

I was almost heart-broken. The emotion displayed by Fassbender was fantastic; his shiny eyes glaring up to the stage from the dancefloor below, crying as he sang. It was a very powerful moment.
A moment to be embraced.

During the movie one of the characters dies. So what does the rest of the group do?.. stick the body on a raft and send it burning down a river.
That’s right – no need to report it to the authorities or deceased’s family, just burn it and bingo – person is now removed from the world, without leaving a trace.
(although the subsequent ‘scattering the ashes’ scene was funny and had the audience laughing out loud).

Jon seemed to grate on me. His unbelievable naivety was neither endearing nor interesting. The way he threw away his savings to be in a group he knew nothing about was plain stupid.

The movie seemed to portray musicians as completely bonkers; some of the dialogue was “WTF” material which seemed as though the group members were on drugs or insane, instead of simply being passionate about their music. 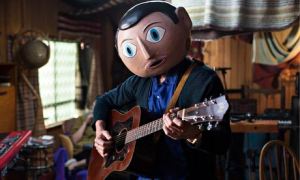 I didn’t want to, but found myself singing Frank’s closing song as I exited the cinema.
It is one of those catchy pieces of crap that somehow sticks in your head for a good twenty or so minutes.
A strange yet endearing piece of tat. 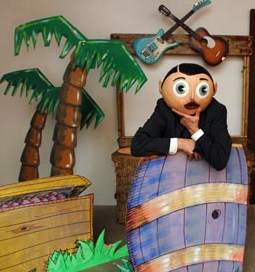 Overall, Frank is different.
It is strange, yet wonderfully endearing whilst touching on some serious subjects as it progresses.
A dark and grungey undercurrent runs in the background as some odd dialogue and antics are displayed – but its not all serious – the audience seemed to be enjoying it as they laughed out loud at random intervals.
The most precious element was the emotion which only seems to be displayed during the final scene – but a lovely performance from Michael Fassbender.

I wouldn’t watch this movie again, once was enough however emotional it was.
There really isn’t much to it.
Endearing but irrelevant.

This entry was posted on May 11, 2014 by rickysfilmreviews.