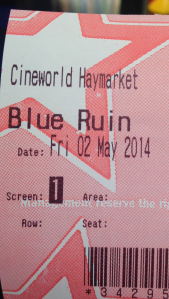 Dwight is a beach vagrant who leads a seemingly quiet life, living out of his rundown car.
But when a policewoman pulls him aside one day to inform him the man who murdered his parents has been released, Dwight’s life is turned upside down – again.
Dwight returns to his home town to confront the recently released murderer – but sets into motion a dangerous cycle of events. Because when confrontation leads to more murder, things start to spiral out of control..

..and Dwight is about to learn that revenge is a dish best served SCORCHING HOT… 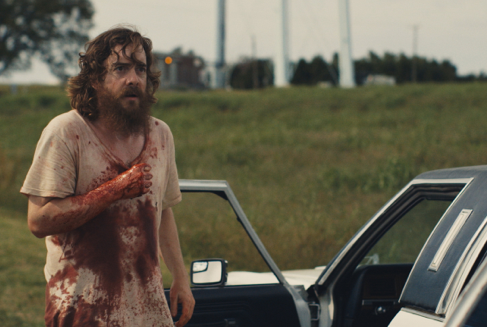 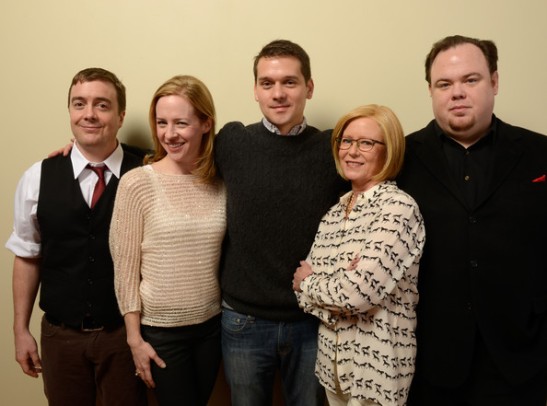 Well that was just fucking weird.
Although the plot is very simple, the movie as a whole is a dull piece of cinema.
Quite literally you get 88 minutes of Macon Blair running round small villages, whilst holding a gun and swearing revenge.
That is it.

Amy Hargreaves is superb, and delivers an excellent performance.
As Dwight’s sister Sam, she is only in the movie briefly but captured me the whole time she was on screen.

Dwight returns home and pops in to see his sister; she takes him to a local cafe where he brings some shocking news – and she bursts into tears. The acting quality in this scene was tense and fantastic, I just couldn’t fault her. It would have been better had she been in the movie more.

Macon Blair comes across as very dull, almost invisible. If he was a supporting actor (third of a group, friend who pops in occasionally, etc.) he would have washed over me completely, and been totally forgettable.
It was only because the camera was focused on him as the protagonist that he made any sort of impact in my memory – he is that plain; like the ‘Ready Salted’ of the crisp world. I was neither won over or entertained by the man’s performance. 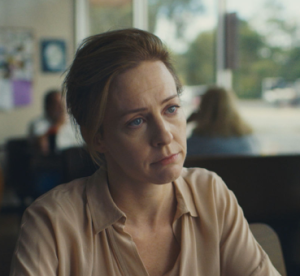 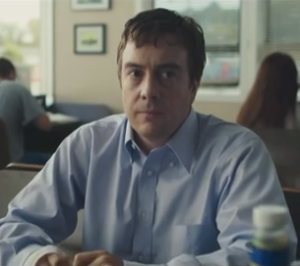 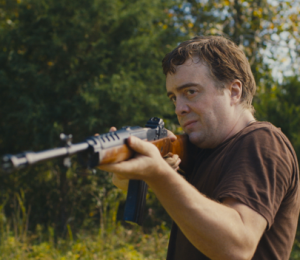 Blood Is Thicker Than Ketchup

If you’re the type to squeam at gory strings of blood or flesh, then Blue Ruin may not be for you.
One scene sees a man get shot in the face – literally – you see the bullet come into contact with his head, and the subsequent facial eruption. And then you see him laying on the ground with his entire head resembling some form of squished fruit.

Another scene sees a confrontation in a house living room; I’ll simply say this: it gets nasty.

On the subject of blood and red stuff, the ‘man seeks ketchup’ scene was bloody random. The scene where Sam takes Dwight to a cafe for lunch sees them both sat at a table, talking about something horrific he has just done.
Just as Sam is about to respond to something he says, a black dude on the table opposite leans over with, “you got ketchup on yours? I haven’t got it on mine”.

..Sam grabs the bottle of saucy stuff on their table, and hands it to the man before returning to their conversation. The man returns to his food with happier tastebuds, and is never seen again.

By God, that must of been exciting to write into the script. 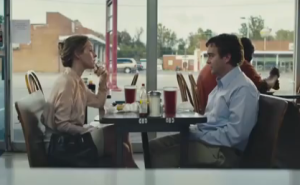 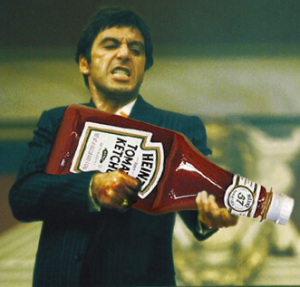 The filming locations used in this movie were actually very nice. Had I the enthusiasm and interest to look the movie up online, I would – but I have not. Therfore I can only guess that it was filmed in the Southern States of America – and filmed well.
The scenery in this movie is gorgeous; vast stretches of grass, long roads in the middle of nowhere, even quaint wooden shacks.
Although made on a very low budget, Blue Ruin managed to capture the beauty of some amazing sights. So keep your eyes peeled. 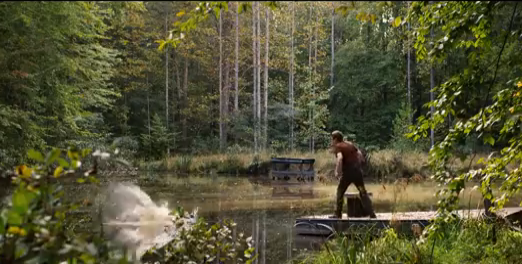 The movie opens with Dwight sitting in the bath, having a nice soak.
But suddenly a car pulls up outside..

..the owners are home.

Yes that’s right – it is not his bath. He has broken into the home of a complete stranger to enjoy a few bubbles. His escape is even more bizarre, as he smashes through the bathroom window, grabs a few bits of clothing off the washing line, and gets dressed on the go. This breaks the world record for ‘most bizarre beginning’ out of any movie I have ever seen. 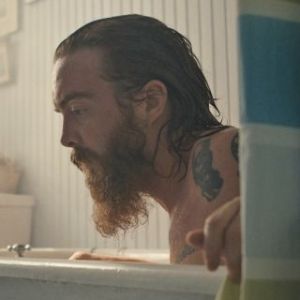 The audience laughed out loud at random intervals, almost creating the atmosphere that this was a black comedy. As far as I know it isn’t, but it certainly felt like it when one of the older men sat in front of me roared with laughter.
I was half-smirking, half-frowning at this.
..and then looked up at the ceiling as I wondered what the fuck I had come to see. 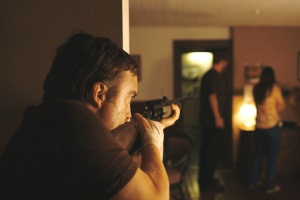 Overall, Blue Ruin is bloody awful, its only saviour is the acting quality.
If I was to see this again, it would be on television – and even then I’d be switching channels (and wouldn’t stop to watch).

This entry was posted on May 5, 2014 by rickysfilmreviews.