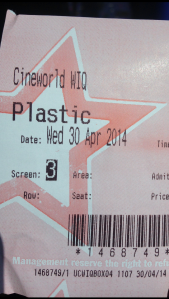 Sam and Fordy are university students who appear to be doing well in their subjects, although behind closed doors they run a highly illegal credit card fraud system.
Their friends Yatesey and Rafa are also little law-breakers – although one night these two commit a crime which puts them ALL in jeopardy..

The foursome have two months to pay a quick-witted, clever gangster £2 MILLION – or the boys will be underground in the freshly-dug makeshift graves he has created for them.
Silly boys.
They’ve got themselves into a lot worse trouble than handing an essay in late – because the dangerous situation about to unfold will change their lives forever.

Essays are irrelevant.
Exams are pointless.
Graduating is history.
These boys have more pressing things on their minds. 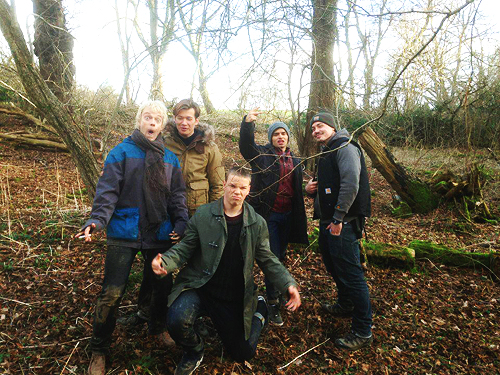 I pushed open the cinema doors, mumbling “that was fucking BRILLIANT”.
Feeling completely satisfied and entertained, I fucking loved every second of this movie.
Allow me to elaborate..

Plastic has all the elements of a decent heist / hustle movie; speedy car chases, snidey impersonations, action with a spritz of excitement, adrenaline-fuelled situations, panic, threat..

My first observation of this movie was that it is has similar elements to American Hustle – except for one striking difference – it is so much damn better.
With American Hustle you have the stunning Bradley Cooper holding open briefcases of money with confused expressins on his face and Amy Adams strutting around in a frizzy-haired “I won’t love you unti you love me – let’s be overly deep about this situation” stupor.
Whereas in Plastic you have a robbery gone disastrously wrong and a panic-drenched plan of pure revenge, which goes BANG BANG BANG and is delivered with perfectly slick timing.

I have to be honest, when I first saw the trailer for this movie my instant reaction was, “great. Another piece of teen bollocks where a bunch of lads with attitude swear their way round the set whilst having just one thing on their minds  – vagina”.
And I’m pleased to say I was proved wrong, because Plastic was brilliantly opposite. 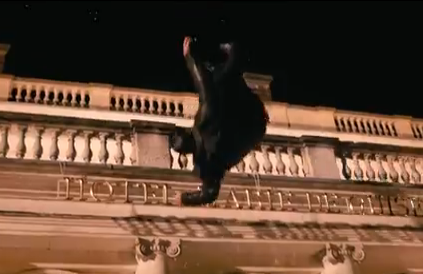 From the opening scene where Ed sits in his van making a dodgy jewellery purchase on a complete stranger’s credit card, I was hooked.
The story kicks off quickly, introducing the plot and getting underway with the action.
At one point the boys head to Miami as part of the ‘payback’ scheme they have created – which provides excellent tension when two or three scences in which they are relaxing, are turned upside down and become terrifying. For example, a few glasses of Champagne in a strip club results in a manic chase through the streets of Miami.

The movie oozes dynamics by balancing the stress levels; one scene sees Sam and Frankie cozied up on the beach kissing in front of a warm fire. This blends smoothly into Fordy, Rafa and Yatesey sitting in the strip club – where Yatesey uses a ‘forbidden’ stolen credit card.. the bar staff tell him it declined – and one hell of a street-chase kicks off.
Up and down, the adrenaline surges through this movie nicely making it very watchable and entertaining. Hustling, GPS, guns, car pile-up’s, diamonds, street chases, forgery, important men deposed.. the action is non-stop and well received. 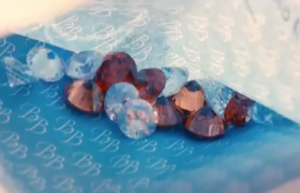 Naivety Is The Greatest Weakness

How simple it is for Frankie to get drawn into such illegal action is beyond belief. The girl works for a major credit card finance firm, yet she is easy as pie to turn he back on them, break the rules and possibly land herself in jail..

Of course, a quick snog from Sam and her vagina walls have completely caved in, leading to the activation of ‘wool over eyes’ switch inside her brain. The girl is too easy to persuade which removes any form of anticipation on her half, however interactive her character is. Oh, she’s got an attitude – but the brains are at absolute zero.

During the ‘yellow and black diamond’ scene I was shocked to the point of laughing in sheer entertainment at how naive the director of the jewellery store was; a heist takes place – steered rather nicely by Allen and Speleers – whereby the director (played by Graham McTavish) sits in the back of a speding Limo screaming (in a sort  of “YAAAGHK, YAAAGGGHHK!!” tone) – the events leading up to this scene were baffling; he approaches a vehicle where Rafa (De Souza) is sat in the back dressed in a fake costume – and without questioning a thing, hands over a briefcase containing MILLIONS of dollars worth of diamonds.
I tutted.
I couldn’t believe how naive the bloke bloody was.
The cars are subsequently seen speeding off with blank facial expressions on the chops of the “security” men who appeared as though they were out on a mid-evening drive. 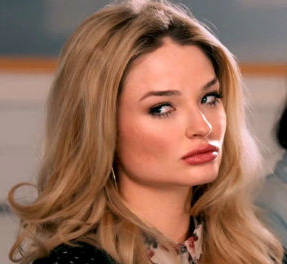 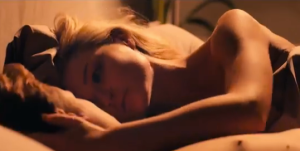 Filming locations used in Plastic included London – and a bloody lot of it. One minute we got a panoramic view of Canary Wharf (where funnily enough I was sat watching the movie – across the bridge on West India Quay), the next – they were speeding through Hyde Park, around Bank or through St.Paul’s.
Without sounding uber-patriotic, I love seeing London grounds being used in movies; not only does it feel familiar, but it carries a different dynamic.

We are all used to watching Liam Neeson speed round the streets of Manhattan, fuck – even the Ghostbusters ended up infiltrating the crown of Statue of Liberty. But its when I see Jeremy Renner and Rose Byrne limping across Westminster Bridge (28 Weeks Later), or Franka Potente running through the tunnels of Charing Cross underground station (Creep) that it feels different – less Hollywood, more Heritage. 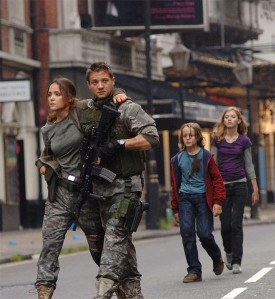 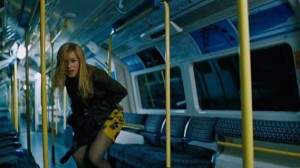 This is where Plastic went right – using the streets of London for the boys to be let loose on, rather than using the cliché smooth streets of New York for example.
When it came to Miami, the director seemed to focus on the classic panning shots of the beachfront and car-crusing streets – very minimal scenery other than sand and water. Pretty nonetheless.

Plastic has all the anticipation of a US blockbuster, but with a Cockney London undercurrent. 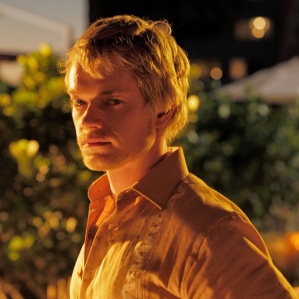 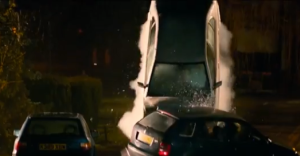 This movie captures the essence of university life perfectly.
There is not of focus on university life as a whole – you only get one (few second) glimpse of one of the boys in class. But otherwise, it nails the characters.
Our boys manage to display that classic ‘too smart for his own good’ mentality, where they pull stunts full-time working, mature adults wouldn’t dare. Clever attitudes, etc.

One scene sees Fordy trying to flog stolen merchandise; the two lads stood infront of him sum up university boys perfectly: well-spoken toff’s whose voices radiate “mummy and daddy paid for my course” – which is then made apparent when one of them announces, “mum isn’t down until the weekend amd I’ll be fucked if I’m doing my own laundry”.
They also have the ‘polo tshirt collar up’ look and “I’m extremely well-mannered & groomed but I’m not gay” attitudes, its uncanny.

I remember this type of guy back when I was at university – I wondered how these sorts of guys had sex; you know – do they lay on freshly-vacuumed rugs, wear silk dressing gowns and socks during the build-up, before carefully sitting the female down and omitting such phrases during careful intercourse such as, “oop – there we are – this is easier than cricket” and “hold tight darling, I’m entering you, and you may feel a slight tingle.. tally-ho”.

Keep your eyes firmly peeled toward the end of the movie, because there is a scene where a male and female pair are on a date in a restaurant.
The man is the absolute double of UK parliament’s Ed Miliband, I swear to god. I had to look a little closer, as I thought he may be appearing as a cameo role (it would all fit, seeing as a majority of the movie was filmed around Westminster / City).
It turned out not to be him, but fuck – the bloke even has the same oddly-shaped nose!
See if you can spot it..

..actually whilst I’m on the subject of lookalikes, I also noticed Yatesey (Alfie Allen) looks like the result of sexual intercourse between Norman Reedus and Imogen Poots – he has similar facial elements. 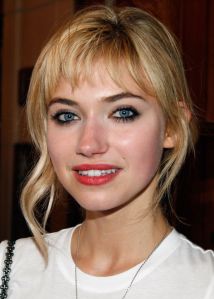 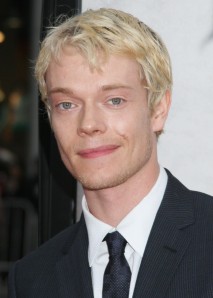 When Marcel delivers the boys a ‘shopping list’ of (very expensive) items he wants, the panic soon sets in; Sam, Yatesey, Rafa and Fordy are in deep shit – and it is played very well.
But just when the boys think they’re out of the red.. they enter fucking crimson.
The acting is brilliant, the atmosphere is full of dread – and the clock is ticking. I was loving these parts; the storyline seemed to accelerate quickly and had an air of excitement about it too.
The best thing about all this was that the movie never got held up by dragged-out scenes; everything hapens quite swiftly, making it a very enjoyable ride.

I was intrigued by the scene where the group make a fake phone call to jewellery experts Aba Dablam – the crafty style in which they carry out the prank was deliciously intriguing, however simple it was.
And a scene near the beginning rang a bell in my brain; Sam makes a fraudulent purchase with a man’s credit card – the purchase can only be delivered to the address registered to that card – so the next morning, Sam parks outside the fraud victim’s house..

..nips into his garden, grabs the recycling bin, and pretends to be the owner of the house when the delivery man turns up with the package.
Genius.

..I never did carry the plan out however.
I had to make do with wanking over a specific scene of my Terminator VHS, whereby Arnie struts muscly-arsed into a bar.
Nude.
Was as though the finger of God himself had twanged my g-spot I tell you.

The build-up to the end finale is brilliant; lots of action and tension used – with some nice expletives thrown in for good measure.
The shit hits the fan royally, and as the panic rises, the boys suddenly begin to realise they may be well out of their depth..

My eyes were on the screen constantly as I murmured comments such as, “shit” and, “oh Christ, no..”
I was loving every second. 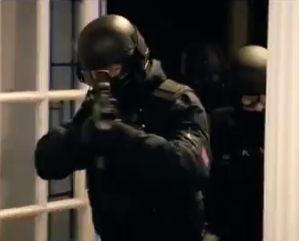 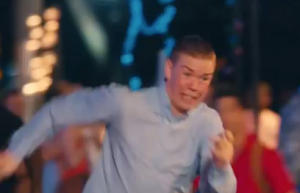 The only thing I found slightly deflating during so much action, was how relaxed the boys became.
A nasty foreign man with two meanies by his side is still at large, and there the boys are – yawning as they cruise down a motorway in their car. This was the only flaw in the story – the way the panic situation suddenly became a chilled situation; not long after the enemy has threatened to bury each and every one of them, they are in their car laughing and joking – and one even lets out a long, loud yawn.
This instantly dissolved any atmosphere the story had built up so far – but luckily, it was easily piece back together again toward the grand finale.

Plastic was – well – fucking brilliant, basically.
Boosted even more by the fact it was based on a true story, the movie flowed at a great speed and pulsated with an enjoyable atmosphere.
A good cast delivered a brilliantly clever plot, with some excellent acting in one or two parts.
The action and the speed at which the cunning plans took place blended well together, creating an atmosphere of various emotions; desperation, fear, love, death..

I was hooked on the screen throughout the entire movie – Plastic wasn’t a Hollywood blockbuster, but at the same time it delivered superbly by itself on the streets of London.
Not once was I bored, but more intrigued and entertained.

I wouldn’t hesitate to watch this movie again.

Ironically, I was at Bank station myself last night – and spotted this poster on the wall.

This entry was posted on May 1, 2014 by rickysfilmreviews.