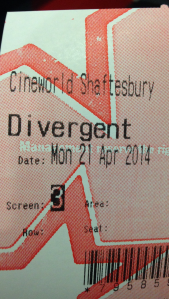 Earth. The near-future. A catastrophic war has destroyed the entire world.

In a small world divided by factions, a certain young woman discovers she is ‘Divergent’ – and she won’t fit in anywhere. But when she also uncovers a plot to destroy all humans who are Divergent, Tris must find out what makes this category of human so dangerous – before she herself, is destroyed..

Veronica Roth’s bestselling novel is brought to the big screen in this post-apocalyptic adaptation.

As the movie opened, I uttered the word “wow” – the graphics had already won me over.

What were the previous skyscrapers of Chicago had become derelict, unoccupied shells with gigantic whirring fans stuck on the side – and cables hanging between each building. A town within a town, small houses (literally concrete square blocks) are dotted around a section of the Chicago area, giving the habitat an otherworldly appearance. A bloody MASSIVE fence secures the perimeter of ‘Old Chicago’ which seems to be buzzing (clearly electric, so that any intruder who tries scaling it gets their fanny cooked).

On the other side of the fence is ‘what was’ – basically the remnants of a war-torn Earth. Not much over there really – just an old cruise liner covered in mould. The graphics weren’t groundbreaking, but were effective enough. I wanted more though – in particular, more focus on the outside world. Divergent used limited imagination by having the cast running arond the inside of warehouse-type training grounds and refugee areas, never elaborating on ‘that world out there‘.

In a sense, the director didn’t give a shit; didn’t feel the need to explain the preceding events leading up to the creation of this new world. The movie just opens with Beatrice announcing, “there was a war. After this..” 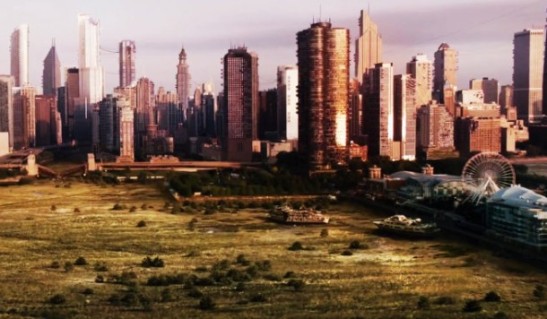 Its the same in nearly every teenage futuristic flick isn’t it: the female protagonist undertakes a journey, encountering various personalitites along the way – one of them being a hunky yet aggressive male she despises.. yet just cannot stop herself opening her heart and yanking down her knickers for him.

Its mad – watching a female being treated like shit by the aggressive guy, yet still she falls for him, because “deep down, he’s not a bad person. He’s been hurt”..

Sadly though, this type of façade happens in real life; the guy is a total wanker yet the girl stays with him – because he’s hot? Or because he’s got control of her? No idea, but its bloody boring to watch. When Trice meets Four, it is clear he is closed off and nasty. This is proven at the dinner table one night during her first few days in Dauntless, when she says something to him and he turns around and asks who gave her permission to speak to him.

..later on in the movie (Four now familiar with Trice but still a little cold) he tries to help her solve the ‘challenges’ the way a Dauntless would. A split-second scene sees Trice slice her hand and Four help patch her up; 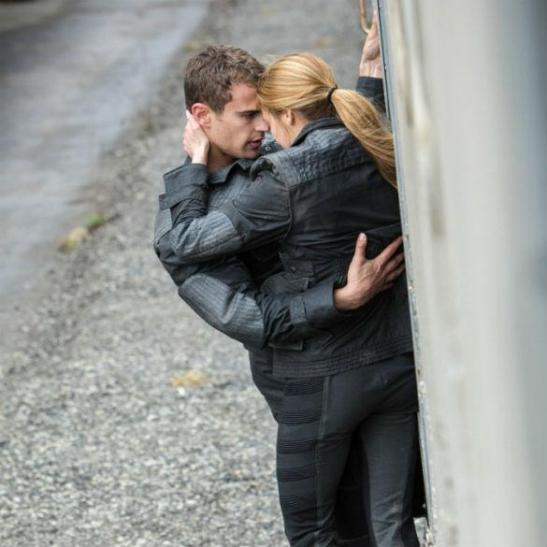 It’s obvious isn’t it. Every bloody time, there has to be a sexual tension between the male and female – even if they bloody despise each other! This element of teenage movies SORELY gets on my tits. I just can’t fathom why the writer needs a romance / sexual storyline during the story; why the characters can’t just – GET ON WITH WITH WHAT THEY’RE DOING.

I think the only movie I’ve seen where the ‘strong’ female character (who clearly isn’t, and gives in to her bubbling fanny at the slightest wink from the male enemy) is Tomb Raider. Lara Croft – a prime example of a strong, independant female in the movies. She embarks on various missions whilst encountering many characters – including sexy males. But she doesn’t stray from her beliefs so that the sexy man can ‘get his nuts in’. She might pucker up and tease him with a straddle, but that’s about it. She gets on with what she’s supposed to be doing, instead of laying back and spreading her legs. 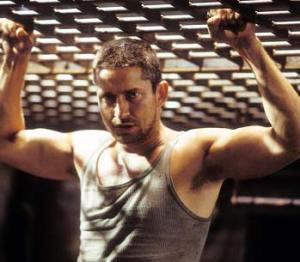 Look at that – who WOULDN’T nail him?! 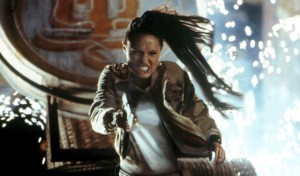 I therefore conclude that teenage movies are pathetic in displaying their message of “hey girls, screw achieving your goals, just screw the hot dude instead”. Come on directors, for once – give us a male and female working compassionately together to overcome important obstacles – not working together on the floor, whilst taking part in horizontal folk dancing.

Jesus, even Hermione Granger and Ron Weasley managed to keep it in their pants!

And whilst I’m on the subject of those two.. 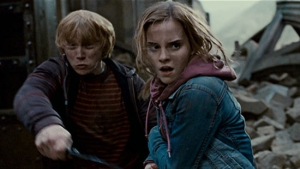 Divergent mirrored a certain element shown in the story of Harry Potter.

A live process in which city residents who are now of age step up onto a stage in front of hundreds of watchers – the watchers being made up of the five factions – and select which faction he/she wants to be part of. This bit immediately reminded me of the ‘Sorting Hat’ of the Harry Potter stories, where the four houses sit watching the girl or boy be placed in their house. Especially when Erudite leader Jeanine (Winslet) informs Trice that although the aptitude test she must take will decide which faction she belongs in, she can still choose where she wants to belong.

I was instantly reminded of Harry Potter and the conversations between him and Dumbledore about Harry being fit for Slytherin, yet willed the hat to out him in Gryffindor; the whole premise of him being put somewhere but having the option to choose also.

Divergent seemed to miss the mark every time with regards to humour.
I noticed a few times, characters delivering dialogue which could have been slick and rather funny if delivered properly.
They were not.

The comedic timing was bloody awful in this movie; one example being the scene where Trice pins her enemy Peter against a wall and raises her gun at him.

“you’re not going to fire” he taunts.
“why do people keep saying that?” she replies, confused.

..sort of.
She delivered this line in such a flat way, with no passion, no tone. A line that could have been very effective if delivered with frustration or humour – but she didn’t. Confused? No. How about angry? “Why?” – no. How about emphasise the “WHY?”

Its not bloody difficult Shailene, just do your job – ACT!

Other flops include the scene where Trice and Four are in an enclosed space with the walls closing in around them. As she faffs around trying to prevent the walls, he mutters, “take your time. I’m just enjoying myself in a shrinking box”.

The joke was on the cast – for not delivering dialogue in the right way. Because if they had just used a bit of sarcasm or dry wit where needed, the movie would have been very effective.

“..now don’t worry honey, this is painless – but installs something in your brain people call: HUMOUR”

Proper meathead, this chunky fucker does it for me every time – I can’t explain why because he’s not classically sexy (square head and slightly chubby) but something about him bastes my turkey, I’m telling you..

He plays Eric – the leader of Dauntless. He struts onto the set in a tight leather waistcoat; big muscly arms and a tight package to match. Those trousers were bulging with a fucking DONGER – the second he appeared on screen I uttered, “FAAACKIN’ HELL, PHWOAR”.

He is there to put the new recruits firmly through their paces. And by God, does he. Eric is the most aggressive character in the story, sending each recruit to the brink of death as he sets them tasks to complete. Jai is actually one of the better actors; he delivers his character faultlessly and effectively – if I’m honest he outdoes Shailene by miles, which is bad considering she is the main character, she is Divergent.

I was actually surprised to see his name in the credits, because despite my sexually satisfied reaction, I assumed he was just a random American actor? His image is completely different to what I’ve seen in his previous movies, appearing more ‘moody punk’ than square-headed ‘Polish plumber’.

I tutted at one point.
When Trice enters a hub to complete her aptitude test, she is given a bright blue liquid to drink.
It is a serum which evokes a hallucination in which she has to deal with certain events.
As Tori hands her the glass I rolled my eyes; it was basically a triangular-shaped shot glass, encased in a glass outer shell.

Ok, call me a nit-picking bastard, but – why do they have to overcook the smallest of things in movies? A mundane object such as a glass becomes a triangular art form – yet other mundane objects such as chairs or taps remain exactly how they were back in bloody 2007. Its almost like a forced evolution, the director has to ‘brighten’ the movie up with these random changes.

Just call a spade a spade, and leave a glass a glass for fuck sake. 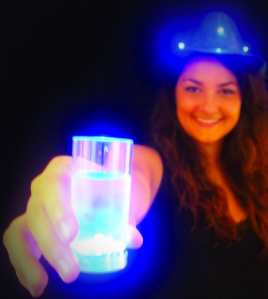 (on a more random note – I noticed as Trice tips her head back and drinks the serum, she has whiskers. Poor actress should’ve gotten a face wax before filming. As the movie continued, I found myself playing ‘Spot The Facial Hair’ – and I wasn’t disappointed with the results..) 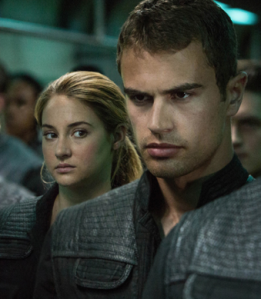 “man, I envy his stubble”

Divergent is great for kids and young teens, despite the sexual tension between the two main characters. Although this tension is present, the only danger for young eyes is Four removing his shirt.
Jai Courtney steals the limelight with his delicious-vicious character, his acting talent is to be applauded especially as it outweighs the main female lead.
Kate Winslet is more of a cameo, although pulls off the ‘bitch’ character brilliantly.

Overall, the story isn’t bad – but it is definitely missing something.
The movie’s main quality is its ability to be wonderfully forgettable. I left the cinema and didn’t give it a second thought.

Well.
..there was one thought.

This entry was posted on April 23, 2014 by rickysfilmreviews.