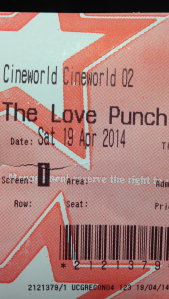 Kate and Richard are a respectable couple from Surrey. Wealthy and content with their separate lives, they wave their daughter off as she leaves home for university. And when she makes her departure she can rest assured mum and dad will return to a nice, simple suburban life of gardening, cooking, pilates class..

Yes. Behind closed doors Kate and Richard appear the perfect suburban couple. But if only their neighbours took a closer look, they might realise all is definitely not what it seems… 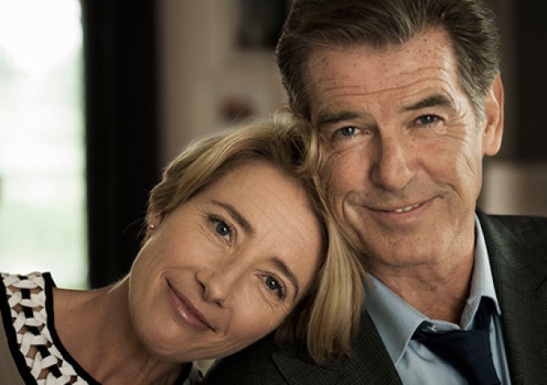 That was pretty funny. Not side-splittingly hilarious, but the witty script was delivered in such a comedic way, that it had the audience laughing out loud throughout. (not so) high-speed car chases, hanging from the ledge of a very tall building and wedding-crashing were just a few of the highlights which moved the movie along nicely. Emma does a lot of running around whilst Pierce seems to hover about next to her, mumbling award-winners such as “that’s a brilliant idea darling”.

But the star of the show has to be Celia – I just couldn’t fault her performance at all.

Infiltrating a top-class swanky hotel is just the beginning; the farcical moments flow nicely – ‘one door opens, the other bangs shut, character running down hallway’ – that sort of thing. And the scene when Kate and Richard arrive in Paris was so daft it made me ‘LOL’ heartily; in order to sneak past the security guard of an immaculate tower block, Kate struts toward him – and fakes fainting. And of course, the scene where the couple arrive back at their hotel room after an afternoon of ‘undercover’ work – as Kate comes through the door, she looks horrific; sunburnt beyond belief and hair all over the place, completely unaware of how she looks as she babbles on about what they got up to..

The silliness of The Love Punch is what makes it so enjoyable. I actually found myself embracing the audience’s reaction – they were bloody loving it, laughing out loud heartily at certain scenes. It was hilarious.

Celia Imrie. Comedy personified; a massively underrated British stage and screen actress. She is bloody brilliant – I don’t recognise many actors / actresses out there who can make people laugh with just a simple facial expression.

As Penelope, Celia brings a wonderfully funny streak to the movie – any time she’s on screen something hilarious unfolds. One scene sees the double-couple sat at a restaurant table discussing their plot to steal the diamond. When Jerry suddenly brings a replica gun out from his pocket, Penelope is shocked – but this instantly disappears as adrenaline takes over and she swipes it from him. She slowly rises from her seat, at the same time doing a ‘tough guy’ impression and quoting a line from a movie..

The gun is accidentally fired, everyone in the restaurant screams – and wine seems to be pouring out of a barrell across the room. The gun was not a replica. The sudden shock and surprise from everyone on screen got a brilliantly raucous reception from the cinema audience. The scenario was fucking hilarious!

I think what seals the deal on Celia’s comic genius are her manners; the way she delivers a funny line with a slight smirk on her face – awfully good posture adds to this, giving her the opportunity to pass off a sexual or sarcastic remark with elegance. The woman could look you in the eye and say “fucking cunty bollocks” – yet you would probably laugh – because of the smirky pout on her face and the way she said it.

Like a posh, glamourous old grandma with a potty mouth. Just fantastic.

At the peak of the movie, Kate and Richard, Jerry and Penelope gatecrash a wedding celebration.
They dress as Texans – and the outfits are funny. Like ABBA gone through a washing machine, Emma sports a long, ruffled copper-coloured wig and gorgeous dress. And Celia – my God, the wig is bloody hilarious. Got to love a gatecrashing scene, haven’t you. The whole sneaky feeling of excitement as the character infiltrates a certain place, and has to achieve their goal within a very tight time limit. Naughty but adrenaline-fuelled fun.

This scene reminded me a little of a scenario I took part in once; my friend Holly and I dressed up all swish and tried our best to infiltrate Canary Wharf (the UK equivalent of Wall Street. Sort of).
Our mission was to ‘get in’ with the big boys, see if we could land ourselves a job for one of the swanky companies..

Oh, we got in with them alright..

..thing is, we were drinking very high-quality Champagne known as Mercier and were completely fuck-faced within the first 40 minutes…

..to this day, I still can’t fathom if those two were transsexuals or not.

A-HEM.
So yes, this scene was good. It added to the atmosphere nicely, and perked the movie up at a time when it needed it.
Because there was one slight downfall..

Good GOD, he’s boring is he not?!
I’m sorry to say this movie would have been substantially better – and funnier – without him.
There is nothing naturally funny about him; nothing which stands out or an obvious element which seems to click with the rest of the cast. I know he was famed for playing husky, suited roles such as James Bond (which he did superbly) but these days, directors seem to be shoving him in comedies which don’t do him – or the movie – any justice.

Emma was certainly the stronger of the duo, her energy carrying the feature nicely. Which was a godsend, as Pierce didn’t stand out much. His slightest attempt at delivering a funny line (which done right, could have been hilarious) flopped spectacularly, and with such a lack of enthusiasm on his part that I can only liken it to when you’re a child and an obvious man dressed as Santa Claus screams “YO, HO, HO!” in a way that made you cringe. Sloppy effort, no passion.

Sorry Pierce, it would have been better without you. 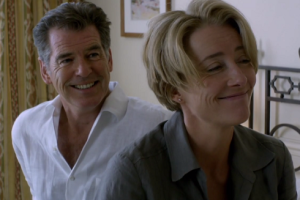 The Love Punch lacked something.
An element which if added to the production, could have spun it into a delightful piece of cinema.
Imagine a movie you really enjoyed, watered down: take a few epic one-liner’s out, switch an important cast member with a dull one, interrupt the flow of it slightly.
And you more or less get The Love Punch.
It was funny, enjoyable in parts – but not overly memorable.

What was it that was missing?…

Overall, The Love Punch is a witty ride. A satyrical script whisks it along at steady pace, and it delivers laugh-out-loud moments where it should.
One actor (Brosnan) brings it down, whilst another actor (Imrie) pulls it straight back up again.
Emma Thompson delivered her performance effortlessly as always and was funny, but Celia Imrie overshadowed her by miles.
Don’t expect to be blown away, The Love Punch is no Hollywood box office smasher – but is worth a watch if you’re extremely bored on a wet Sunday afternoon.
Again, Celia Imrie saves the day.
Well done, Celia.

Penelope: “no. But I brought sandwiches. Egg-mayo”

This entry was posted on April 20, 2014 by rickysfilmreviews.