Simon James is lonely and lost.
He dreams of wooing his work colleague and neighbour Hannah, but is too shy to express his feelings for her.

Then one day, a new employee starts in Simon’s office. His name is James Simon. And he is Simon’s doppelgänger – but his personality is the polar opposite.

Things are about to get interesting.

And Simon is about to wish he never met James… 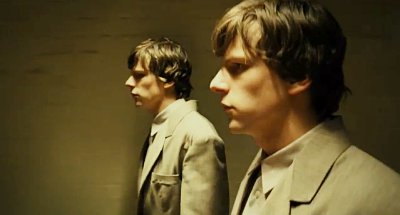 The movie opens with Simon sitting on an empty train on his way to work. A stranger suddenly approaches him and says, “excuse me – you’re in my seat”. Simon looks around the empty carriage, then back at the man in shock. He reluctantly swaps seats.

This opening scene got a nice reaction from the audience – a few seconds in and they were already laughing out loud. But this scene was about to give way to a movie which would shock, entertain and upset..

Watching this movie was as if I’d fallen asleep and started dreaming. The whole thing was strange, otherworldly. And most scenes were played out in a very unique style. Walking down long hallways with smoke billowing in the air behind, shadowy figures jumping off of buildings, etc. added to the overall strangeness. And then of course the conversation was another element – some of the dialogue between the lead character and his acquaintances was odd.

At one point, Simon turns up for a shift at work – and the security guard doesn’t recognise him, so asks for his pass. Simon subsequently ends up in a near-empty room with a sarcastic gentleman who grills him about not existing his company’s database. The way in which the gentleman smiles oddly then exits the room was quite literally – the stuff dreams are made of.

Another scene sees Simon call Hannah on the phone and invite her up to his twin’s apartment. Again in a dreamlike sequence, Hannah blows pieces of paper off her hands before proceeding to his apartment – where a sudden emotional confrontation takes place – and then returning to her own. She then lays down on her bed, staring at the ceiling. Tears fall from Simon’s eyes.

I honestly cannot fault the director; if his intention was to mirror scenarios similiar to those in dreams, then he nailed it. Watching The Double was sheer escapism, and this was all down to its surreal atmosphere. If you’re a fan of thought-provoking, symbolic movies then this will suit you down to the ground with its stylised direction and performances.

Keep your ears open during the scenes with Simon and his double James. The double seems to speak at such an incredibly fast pace that I even had trouble keeping up! What he says is relevant to the plot and matter-of-fact, its just spoken too bloody fast.

But then saying that, Jesse Eisenberg seems to portray this sort of character in most of his movies doesn’t he. He’s not typecast as such, but seems to adopt the same traits; the smart geeky kid who knows a lot and has no trouble vocalising this talent. He was a fast-speaking, smart kid in The Social Network, intelligent, vocal man in Now You See Me, I think he even played a smart-arse in Zombieland – there’s just no stopping his geekiness. I’d like to see him pipe down and not play the whizz-kid for once. 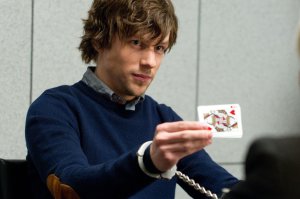 Briliant little actress, Mia. And The Double was another feature which let he talent shine. She played Hannah effortlessly, which seems to be her main quality – no effort. In a good way of course.

With Mia, its all in eyes. She only has to stare intensely at something to get her point across, she doesn’t need words. I think the first movie I saw her in was Stoker (Nicole Kidman) where her character was a moody, dark-haired young girl who although full of fire, remained subdued at all times – but her emotions were displayed clearly through her eyes.

In The Double, Mia remains a strong, expressive actress whos eyes are literally the gateway to her soul. One scene sees her sitting at a restaurant table with Simon – and as she sits there, the look on her face is incredibly moody. She stares at him, as if displaying anger at something. The look is subtle, yet powerful. Again, Mia’s best talent – the ability to genuinely act without going over the top. 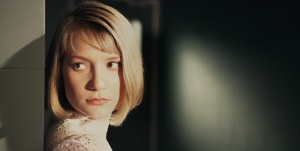 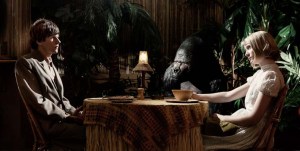 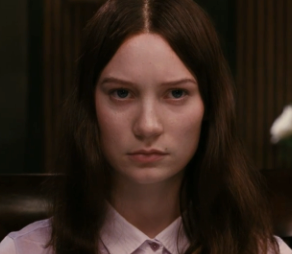 Don’t Judge A Movie By Its Poster

Before I went to see this movie, I had seen the trailer and the poster. And I assumed I’d be going to watch a film about a man who somehow splits in two and has a twin running around causing havoc. However, the movie seemed to stray from this element; it didn’t focus on the fact Simon discovered James and the effects they would both have on his colleagues & friends – it focused on how Simon’s emotions came into play, the undercurrent of his personality.

Therefore, the whole ‘twin thing’ was a symbolic reference; an idea created to help portray the main character’s situation. So if you think you’re in for a ‘Parent Trap’ type thing, forget it! As the movie continues, Simon’s friends / colleagues meet James but seem oblivious to the fact he is a doppelgager – to them he looks like someone else.

But then the situation delves deeper once James becomes more involved in tampering with Simon’s life..

The Double is briliant at asking questions about life during its screen time. It is one of those rare pieces of art whose reason for being produced is to simply ask and tell. Most movies are made purely for entertainment, others are made with a concept which explores those taboo subjects; the meaning of life for example – why are we here? Love, madness, the unexplained, split personality. The Double is one of these.

I found myself having to concentrate fully on what was being said / acted out, because it all mean’t something. Situations such as one of the men holding a knife to the other’s throat – but pulling away, leaving a slight bleeding scratch on him. And a scene towards the end where Simon lays in an ambulance, tears fall from his bloodied face as a gentleman next to him comments on his personality.

This movie is certainly not backward in coming forwards; it carries messages which are put across to the audience by means of symbolism and meaningful script. Touching on the subject of symbolism again, I noticed something about this movie – the colour blue. Whether walking down a hallway or in a restaurant, the same shade of blue kept appearing.

Simon walks down a hallway with Hannah at one point, and the colour is across the wall. A waiter in a restaurant makes drinks at another point, and the concoction in the cocktail blender is the same bright colour.

Overall, The Double is deep.
A thought-provoking piece of work which poses questions many people would probably never ask.
It is dark but also quite comical in parts, thus creating a genuine atmosphere and a slight air of sadness.
So if you’re into your exploratory stories and meaningful dialogue, then give this one a go. You may be rather impressed.
I didn’t find this movie amazing, but it was definitely very watchable.

This entry was posted on April 4, 2014 by rickysfilmreviews.