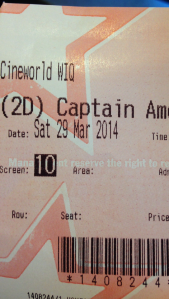 Steve Rogers struggles to embrace his role in the modern world and battles a new threat from old history: the Soviet agent known as the Winter Soldier. 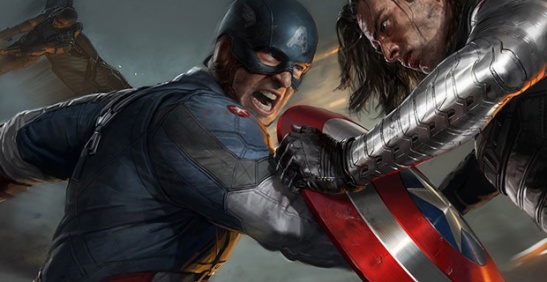 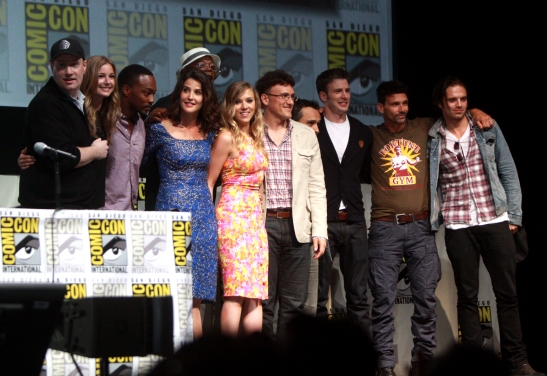 If this movie didn’t include Scarlett Johansson, it would have massively nose-dived. The fact she was part of the cast mean’t Captain America: The Winter Soldier was saved from being a possible flop. Supported strongly by an actress who oozes humour as well as sex, this movie was slick and sexy whilst being propelled forward nicely by high-speed action.

Whenever Scarlett was on screen I couldn’t help smiling; her dry humour radiated brilliantly whenever she delivered a line – soaked in sarcasm at certain points, she had the audience laughing out loud frequently (or whenever she was on screen) and made Chris look as though he didn’t have a funny bone in his body at all.
I’m sure the Black Widow isn’t supposed to be a comedienne, but by God does she add some nice comic relief to a movie which would otherwise be a blond hunk running around with a constant expression of confusion on his face. 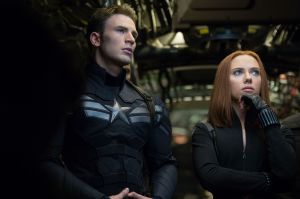 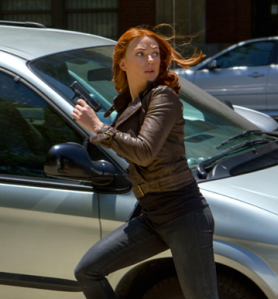 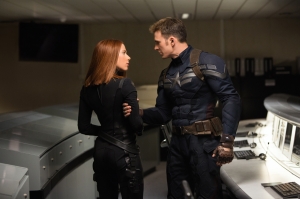 If you enjoy a good old action movie, I don’t think you’ll be disappointed. From the opening scene where a viciously fast attack on a ship takes place, through to the closing finale, there are plenty of slick action scenes. One scene I particularly enioyed was ‘motorway carnage’ – in which our hero, Nick Fury, and The Black Widow are pursued by a bunch of gun-wielding nasty bastards across a packed traffic bridge and down onto the freeway. Its fast, slick and sick – a scene which sees Natasha (Black Widow) fall casualty to a gun wound, amongst exploding cars and burning bridges.

Its the first time I’ve seen her appear so vulnerable – she kind of squats behind a car, a look of shock/fear on her face – and her status is lowered slightly, I thought to myself, “shit – if the Black Widow seems as vulnerable as a money spider, then this is BIG.”

And I wasn’t wrong…

Something Borrowed, Something Wrong..

The scene where Steve visits his old beau Peggy in hospital was baffling.
As she lays on her death bed, he begins talking.. but its when she responded that I frowned – something wasn’t right.

Peggy (played by Hayley Atwell) is clearly a very, very old lady. Steve and her were involved with each other in the 1940’s so the old bird is in her 90’s. She is old, with grey / white hair, and her skin is sagging. She appears frail and near death.

..so why, when she opens her mouth does she sound lke a woman in her mid-thirties?

Its not my place to comment on Atwell’s acting talent. But she was shit. I sat watching this poor old lady fading into oblivion – whilst listening to a young woman bursting through the prosthetics.

She spoke through croaks, as if the actress couldn’t give a crap what she was doing. It was tacky; like watching a young girl do a rubbish impression of an old lady.
Oh I’m aware this minor fault isn’t crucial to the overall movie and that it seems I’m splitting hairs, but still – it was a fault which was noticed. And it lessened the feeling of a scene which could have otherwise been quite emotional. 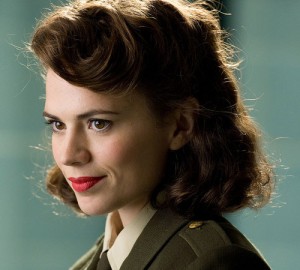 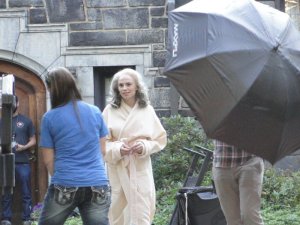 The music throughout this movie was good. One of my first observations was the boomy scores crashing out across the audience. The opening scene kicks off with classic Avenger-style music which is bursting with heroics – you know the score; birds eye view of the City as the camera pans sideways, etc. But overall, the soundtrack is good – it roars through the movie, adding nicely to the action and gives it the kick it needs.

I wondered as I sat watching Captain America: The Winter Soldier – “why don’t people just shoot at the FACE?”

In these action movies, there is so much running around whilst the enemies shoot at each other. This takes a while, due to each person being quite fast at running / driving – but also because the bullets either miss, or hit their shoulder / arm area. Yes I am aware we’re watching an action movie whereby each chase has to be lengthy – and although vicious, the director can’t actually show people’s faces being ripped apart, but come on people – just go for the face, surely? It would stop the enemy immediately.

I think Lloyd Christmas got it right in Dumb and Dumber when he asked, “..but what if he shot you in the FACE?” 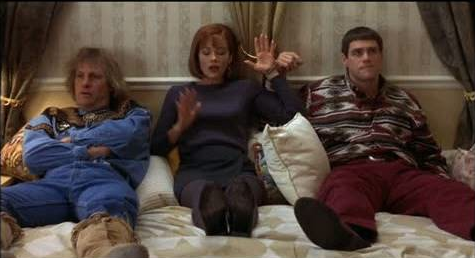 Accurate observation – no-one ever shoots at the face, which would probably stop the enemy in their tracks and bring his / her terrifying rampage to an immediate end.
Instead, we have to endure lengthy pursuits which can become quite tedious. Which brings me onto my next point..

Towards the end of this movie, I found myself exhaling breaths of tediousness.
The classic switching of arse-cheeks took place more than a few times.
I was getting a bit fed up now..

Captain America: The Winter Soldier is not a bad watch – it just becomes a little tiresome towards the end. We watch as Steve battles his friend-turned-enemy atop a Helicarrier. After replacing the controller of the vessel leading all three ships to destroy each other, Bucky jumps aboard – and the pair begin their confrontation.

In all honesty, I couldn’t give a shit WHO won – I was just urging the end to hurry up.
I realised that now the Black Widow had graced the screen with all her sex appeal and delivered a lovely load of laughs, the rest of the movie was left dried up and serious as Captain America took the spotlight.

As I mentioned, this movie is not overly bad – but it does become a bit tedious as it hurtles towards the credits. 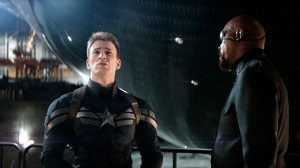 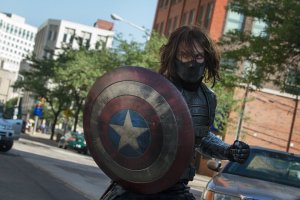 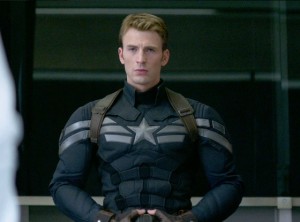 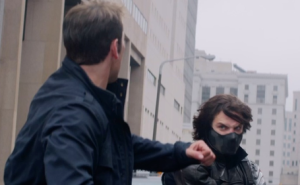 I speak now as someone who is inexperienced in the whole Avengers franchise. As a movie viewer who is not obsessed with Hawkeye and the rest of the Avengers characters:
WHY is Hawkeye’s logo everywhere in this movie? It is all around them – literally.
The classic hawk bursting from stripes can be seen on the office wall of Alexander Pierce and in the vehicle of Nick Fury, as well as dotted on various people’s outfits.
I thought Hawkeye was – well, just Hawkeye? I didn’t realise his famous logo was actually used in various other places, making it multi-functional.

The sporadic appearance of his logo without actually seeing the Avenger himself was a bit tacky. Especially as seeing Jeremy Renner’s gorgeous chiseled features on screen would’ve been a welcome gift.
Again, I don’t claim to be an in-depth Marvel fan who knows anything and everything about the characters & logos; therefore I found it slightly confusing.

Under The Skin – Again

A scene towards the end of the movie was quite slick; a group of business people have been set up by ‘the nasty man’, and at one point the female of the group turns round to face him.
Pulling at her face, some sort of hologram-mask peels right off, revealing the Black Widow. Old blonde lady turns into our sexy heroin, and its done so simply that its actually very effective.

I laughed a little at this bit; mainly because Scarlett is currently in another movie called ‘Under The Skin’ – where she plays an alien who literally disguises herself under a female skin (the skin being Scarlett).
Oh, the irony was fantastic. 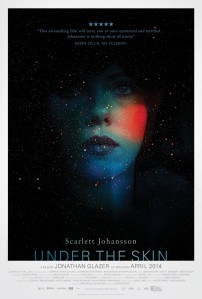 Director Dug Up A T-Rex

Actor Steven Culp turns up at the very end of the movie. For those of you not into soap opera-style shows, Rex Van de Kamp is a character from Desperate Housewives played by Steven Culp.
At the end, there is a scene where one of our main characters is sat in a courtroom having to go through a grilling by officials after what has happened. And it was one of the most random cameos I’ve seen – the man I know as Rex Van de Kamp, sat asking one of our Avengers questions.
He is on screen for a matter of seconds – adding to the total randomness of the appearance.

Ever had that in a movie? An actor or actress you haven’t seen in years pops up to say four or five words, then disappears again? I wonder what made the director decide to dig ‘Rex’ up?
Random. 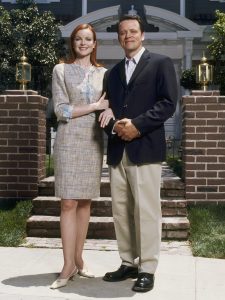 Captain America: The Winter Soldier is watchable, but largely forgettable.
It is the more tame and lame of the Avenger movies, proving that Chris Evans delivers nothing but a pretty face. The man may have perfect blow-job lips and gorgeous deep eyes, but the talent stops there – nothing he did or displayed won me over. At all. He seems to hop, skip and jump through this movie effortlessly (literally – no effort made), and honestly – if Scarlett Johansson wasn’t part of the cast, Captain America: The Winter Soldier would have flopped spectacularly.
The fact she was mean’t the movie was supported by a strong talent, and buckets of sex appeal. Mixing her good looks with a wicked sense of humour was the recipe it needed to survive.

This movie neither excited me nor disappointed me. It simply – happened.
I don’t think I would sit through it again, it just isn’t worth a second round. Sorry Chris. 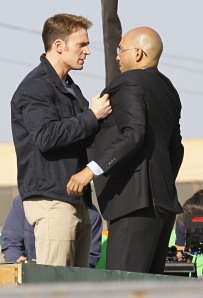 This entry was posted on March 31, 2014 by rickysfilmreviews.