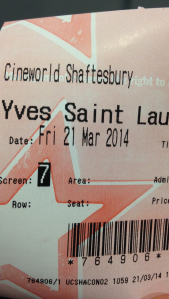 A look at the life of Yves Saint Laurent.

I’m going to lay it on the line immediately – this movie was just awful.

I don’t really know what I was expecting, but it wasn’t this irrelevant piece of crap. In general, a biopic should deliver an effective, memorable performance – the lead role played by an actor who gets stuck into it, makes the part completely his own. His fellow cast should support him by adding a talented ensemble you embrace and remember.

I didn’t recognise any of these elements in Yves Saint Laurent.

So where did it all go wrong? How did a movie about one of the world’s greatest fashion designers end up on the sewing room floor? And were there any good bits at all?…

The undercurrent of this movie is a story which delves into the later years of Yves’s life. The story is told by the designer’s ex partner Pierre, which makes it easy to follow and means we get chunks of his life given to us directly – like passages from a diary; this kept the concept fresh, rather than being left to run and dry out.

That is literally it plot-wise: the ex partner of a man telling the tale of his life. And he does so in classic “I miss you” style – sitting at his balcony table, looking out across the horizon. Off-narrative and on-screen, Pierre is France’s answer to UK’s Frank Spencer; he flaps around irritatingly throwing hissy fits whenever Yves goes off to do something. His floppy haircut only adds to this irritation.

The scenes where we actually see Yves designing and creating dresses was interesting. In one of his first meetings with a top fashion industry leader, he walks in and nervously begins talking about designing – but soon grabs a pair of scissors and impresses everybody in the room with his craft. Then of course came the fashion shows – which I rather enjoyed.

As part of his work, Yves has to showcase his designs for each season. The shows are put on in front of an audience of critics and close acquaintances. With all the buzz backstage, as well as the glamour of the models strutting down the catwalk, there was an air of excitement throughout. I found myself revelling in the anticipation of which outfit would come out next, and how the audience would react, etc. These catwalk scenes were definitely the best scenes of the movie, observing the works and creations of Yves Saint Laurent himself in one huge showcase. It was interesting and the key element of the story I thought; witnessing the journey of his work.

We also see the birth of his Mondrian dress design – a scene which takes off nicely when Yves catches a glimpse of Piet Mondrian’s abstract art in a book, and decides to bring the painting to life.. The design is soon made into dresses which we see modelled by classic 70’s beauties. 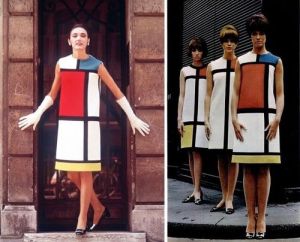 This movie focused rather a lot on Yves’ sex life. We witness his first romantic encounter with Pierre (which involves a lot of kissing) but later on the designer seems to put his tools down and practise the ‘scissors’ position himself, instead. There is cruising on a riverside, drunken horny action at parties and even a scene which sees Yves and a friend go to a gay sex club – where Yves gets banged (graphically) up the arse. Lovely detail, but slightly irrelevant I thought. I mean, what was the director thinking?: ‘the man was gay, so lets show him getting nailed, this will be very relevant and effective’ ?!

I love how gay people’s sex lives are highlighted in movies as though the director HAS to portray what they got up to behind closed doors. How monumentous it was when the homosexual man first played ‘seek the sausage’.

The lead actor seemed to play the part with simplicity. Although quite bland in appearance, he carried the movie all the way through. Personally I have no idea what Yves Saint Laurent’s personality was like, but I assume Pierre done a good job – he certainly had the look. Its incredible though, his ability to fade nicely into the background even though he is on screen as the main character. Seriously – nothing about the man stands out as dynamic and the supporting cast seemed to be on the same level as him. On the plus side, I couldn’t help noticing he resembled Spiderman‘s Tobey Maguire whenever he was wearing his glasses. 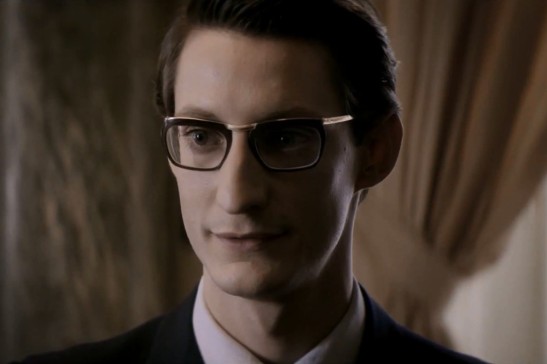 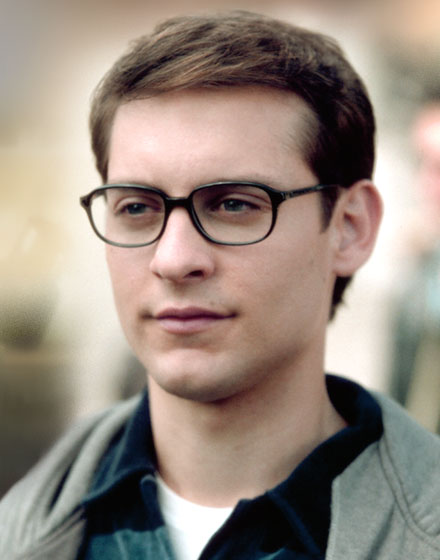 If you’re into your brands and trends, or indeed work in the fashion industry then you’ll no doubt enjoy the movie. I doubt you’ll love it however, as although it touches heavily on the craft of fashion creation, it isn’t overly exciting. It just doesn’t deliver enough humour or enthusiasm in its script / screen time.

Nonetheless, this movie is about Yves Saint Laurent – a pillar of the fashion industry – so again, if you’re into that then its worth a watch but just don’t expect to be blown away. 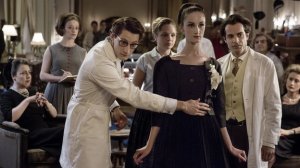 This movie was genuinely lacking something. A spark. Dynamics which could have kicked it into gear and given the audience something to embrace. It just wasn’t effective enough; and could have been produced a lot better. A few celebrities perhaps? The screen didn’t have to be crowded with massive ones – just one or two B or C-list actors, this would have juiced it up nicely.

There wasn’t enough emphasis on Yves Saint Laurent’s clothing creations. Oh we got to see some of the outfits on the catwalk and how the Mondrian style took off, but the movie didn’t focus enough on his genius designing – it veered off in the direction of his failing love life – and the life of his ex partner. And then the lives of his drug-abusing friends as they stumbled around parties. We could have got a lot more; catalogues flapping open, bright clothes gracing the screen, etc.

Unfortunately we got fuck all. This movie was badly directed.

At no point of this movie did I feel entertained or inspired. I did find the creation of his clothing interesting, but just as I started to enjoy watching the process, the director seemed to yank this element away. This is a biopic which should have been screened – and stayed – at film festivals such as Cannes – impress a few people at the concept of making a movie about Yves Saint Laurent, but leave it there. It was by no means as effective or interesting as I hoped it might be and the director made a massive mistake by concentrating more on the man’s love / sex life rather than his career in clothing.

Other biopics I have seen outweigh this by miles. I really wouldn’t rush to see this one, people. Even if you have passion for the fashion industry. DO NOT waste your money, wait for the rental.

..and even then, put it at the bottom of your rental list.

This entry was posted on March 22, 2014 by rickysfilmreviews.