A woman drives around in a van. She pulls up beside a random man in the street, and asks him for directions. She then offers the man a lift to wherever he is going.

The man grips the door handle and opens the van door.

..he’s soon going to wish he’d never even walked past the woman.

And he’s not the only one… 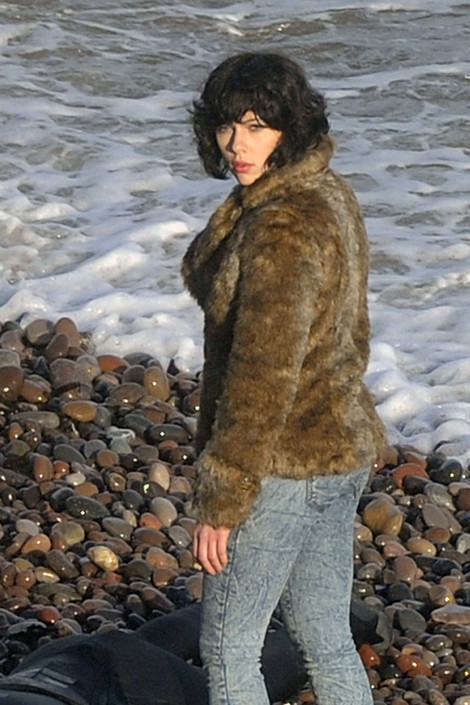 The movie opens with a completely black screen. And this lasts for about 20-30 seconds – which, in cinema terms, is a bloody long time. As I started looking around thinking, “what the..?” – a dot appeared on the screen, and very slowly began to expand, forming something… 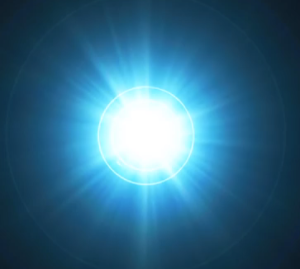 She is the only main character / actor in the feature, so of course she has to deliver – but she did it well. The entire mystery of this bizarre movie is all down to Scarlett – and it was all in the face. Her naturally pouty features are almost a trademark for the actress, but another element of hers is the classic sultry, lingering looks she gives. And throughout Under The Skin this dynamic remained strong and consistant.

Scarlett was different in this movie to anything previous I have seem her in. She brought quite an emotional quality to the screen; lingering looks of sadness and confusion which to be honest kept me wondering what she was thinking / about to do. One thing I’ve noticed about Scarlett is the way she looks at people; almost as though she’s about to break into laughter – there is a slight flicker of smile even when she’s being serious. 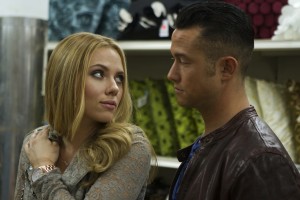 If you don’t read the synopsis for this movie before you watch it, you may be sat there wondering what the bloody hell is going on. Fortunately I had – so I knew the general gist of who the main character was and what she was upto..

The unknown woman drives around in a white van for a good percentage of the movie, picking up random men she meets. We watch her purposefully track down and target men who are passing by at the time she’s driving past. She’s on the prowl big time, and manages to strike up random conversation which generally starts with her asking for directions to somewhere nearby.

However, once the pleasantries are out the way, the unknown woman offers the target male a ride – but each one is going to regret evening opening the door…

The scenes where SHE picks up the men are just plain weird. Shortly after getting into the van, the present world fades out and a new one ripples in..

We get a distant glimpse of the woman as she peels her clothes off whilst luring the man towards her – and he starts removing his clothes whilst advancing slowly in her directin. But all of a sudden the floor turns into liquid which he submerges into.

The man disappears beneath the blood-red liquid.

One of these scenes stands out for me; when the woman lures yet another man into her ‘world’, he is subsequently suspended in mid-air (but underwater) and unable to move. As if trapped in ice, his body seems to resonate throughout the ice, but can’t actually move. As he blinks slowly, he sees another man floating opposite him.. there is pure silence – until the second man makes a ‘SNAP’ sound (a few of the audience jumped) and suddenly – turns into a scarf. 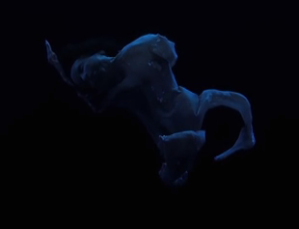 Literally – his body twists and ribbons into what I can only describe as a scarf.

It was one of the most random, sinister things I’ve ever seen in a movie. 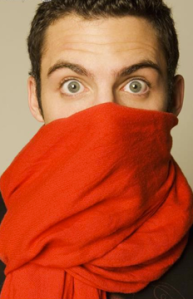 These scenes reminded me strongly of dream sequences; melting floors, drowning in liquid, people becoming other things, etc. Artistic and quite sinister, they had me transfixed – I couldn’t take my eyes off the screen, for fear of missing something. And like with other movies which intrigue or baffle me, I found myself in constant reaction to what was happening:

Nose scrunched in upwards direction, raised eyebrow, eyes wide. I love it when a movie evokes reaction from me, and Under The Skin was another gem which did so.

My advice: keep your eyes peeled during these strange scenes – although I found them slightly confusing, they are crucial to the plot and are full of symbolic references which may just explain a few things.

The music used in Under The Skin is excellent. Blended with some bizarre sound effects, it makes for eerie listening. Each score is deliciously sinister, adding to the atmosphere whilst being quite modern at the same time. The soundtrack is very fitting and couldn’t have sounded better on the surround cinema speakers, the way it washed over the audience.

I thought the scenery in this movie was very pretty. Scenic. It is set in the Scottish highlands, and as such the audience are treated to an eyeful of vast green landscape, lengthy country roads, and slopey villages.

I found myself smirking at one point – as I watched Scarlett Johansson strutting along a Scottish country road, and then sitting down in a bus stop. It was the most unusual thing; she looked so out of place. We usually see her running through the streets of Manhattan, etc. so seeing her slumped at a bus stop in Edinburgh was a brilliant ‘fish out of water’ twist for the actress.

Of course as ‘SHE’ is driving around, we get some inner-city views (mainly traffic lights and high street shops (how nice to see H Samuel & Clinton Cards pop up. A familiar touch there) – the pavements seem to be crowded with rowdy Scottish people. But when the camera pans out across the more leafier highlands, its definitely a pretty picture. This captures the artistic element, which when mixed with the dark undercurrent of the story, brings a grunge-like feel to the movie. 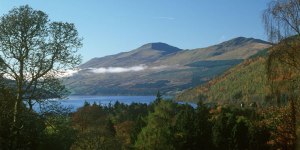 If you get easily saddened or upset by bad things happening to little children, then I’d urge you to look away for a moment during ‘beach scene’ – it involves a bubba (no more than 2 years old) being abandoned.

When its mother dives into the sea to rescue their dog who has apparently become adrift, she gets into deep trouble herself – so the father then plunges into the choppy sea.. and HE is pretty much fucked too. The result – a cute little infant, crying for help but no one coming to its aid. The scene changes but returns briefly to the infant: where darkness has fallen and the poor little thing is still sitting alone on the rocks, crying out for its parents.

I felt sick. I really did. I can’t stand anything like that happening to children – even in movies. It proper tears at me and makes me want to cry. The image of that little thing looking around and crying for help was heartbreaking. I hated it.

Again, if things like this grab your heart too, look away at the exact moment: ‘the swimmer gets knocked unconscious’. 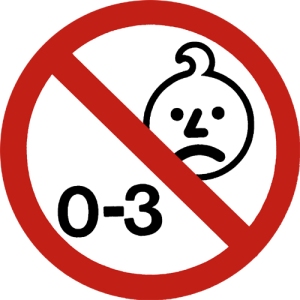 Ever tripped on drugs? Been found with an illegal substance in your bloodstream? Had a good time whilst doing so?..

Then fucking LAY OFF THE DRUGS WHEN WATCHING THIS MOVIE. You won’t need them, believe me.

The scenes where we see the male victims enter the otherworldly lair are a complete headfuck. Bizarre, trippy. The rest of the movie is just as bizarre, mixing the entire thing into a soup of sheer ‘WTF’. Honestly, if someone were to be using drugs whilst watching this movie they would quite possibly turn inside out and cross universes into a different existence – its so strange. 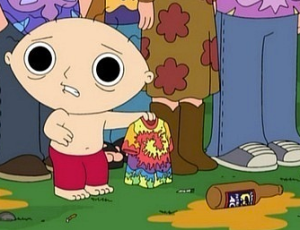 I already mentioned how expressive she is, but overall Scarlett Johansson was a treat to watch as she played out this movie.

Wonderfully numb, her character mirrored the sort of personality you’d see in features such as The Stepford Wives.

Head up, doe-eyed expression with a faint flicker of a smile but remaining cold and robotic – this was how Scarlett’s character was. At a few points, she stands looking up at things with an inquisitive look on her face – this drew me in, intrigued me as I wondered what she could be thinking / feeling. And at another point, she exits her minivan because of the fog on the road – and in true Stepford fashion, walks (head up, good posture) into the fog in a sinister daze.

I love characters like this; frozen in a certain way and unable to break through the barrier of feeling – so they just end up BEING. Brilliant concept. 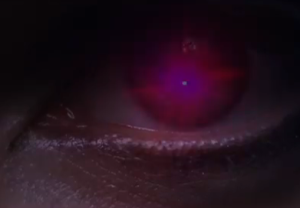 The word ‘natural’ springs to mind. Because this is exactly how the actors came across. Under The Skin felt like a reality show at times, the way the men and women brought such an honest flair to the screen. Sometimes in movies, you can clearly feel the actors – although good at their job – are just actors, putting on a show. But this time round, it was like watching a ‘woman in van accosting people in public’ reality TV show. The supporting artists were THAT genuine.

‘Her’ mission is not clear; why she is doing what she is doing. The movie lacks dialogue, clarification. As I sat there watching the woman drive around in her van, my only thought was “why?” – but being completely on her own mean’t I couldn’t find out the answer, because there was no secondary character for her to interact with.

Lack of explanation of certain scenes. For example, the strange world she lures the men into – it just happens. Then we never see the man again. It was impossible to tell if the ‘liquid scenario’ was an actual trap she set for them, or if it was a dream. Was it actually happening or not?

If You Go Down To The Woods Today…

..you’re in for a terrifying discovery.

All will be revealed.

Under The Skin was very surreal, and I actually really enjoyed it. It is a deliciously sinister concept, played out well by Scarlett Johansson. For once she gives us something very different to her normal Hollywood feats. Dark, grungey, slightly morbid.

This movie is extremely confusing – but watchable – and it raises an eyebrow at the same time as engaging its audience. I couldn’t take my eyes off the screen, I was that captivated by the strangeness of it.

This movie is no Hollywood smash, but it passes the ‘unusual’ category with flying colours. And Scarlett may not be running around leather-clad and yelling at some hunky dude on the streets of Manhattan – but this is exactly why she did well – she broke out of her normal typecast role, and served up a proper weirdo.

So it could have been done a little differently, but nonetheless Under The Skin kept me intrigued from beginning to end. And just you wait for the end – its a shocker.

My mouth was still hanging open as the credits rolled..

This entry was posted on March 15, 2014 by rickysfilmreviews.